Episode 1: End. Begin. All the Same:
When skekTek the Scientist stumbles upon a new source of life-force for the Skeksis to pilfer, the Lords are quick to capitalise on it. Elsewhere in the Castle, Rian, Mira and Gurjin set out to capture a Spitter to prove Captain Ordon that his son is worthy. Down in Grot, young Deet learns of the Darkening from the Sanctuary Tree after being attacked by a Nurloc. Meanwhile in Ha’rar, Princess Brea, always in pursuit of knowledge, seeks answers after a series of unfortunate events concerning the visiting Skeksis. In a mix of curiosity, morbid happenings and inconceivable tragedy, the destinies of these three Gelfling are set alight.

Episode 2: Nothing is Simple Anymore:
Mother Aughra wakes up from her interstellar dream-coma to find Thra in danger and her Third Eye shut. Deet explores above ground and meets spoon-wielding wannabe Paladin podling Hup after an attempted attack from a Spitter. Rian, now falsely accused of murder and treason, must grab the evidence he needs and escape the Castle of the Crystal. Brea turns to the Sifa clan for answers which can only end in disaster and Chamberlain is up to his old manipulative ways. It’s time for new journeys to begin. 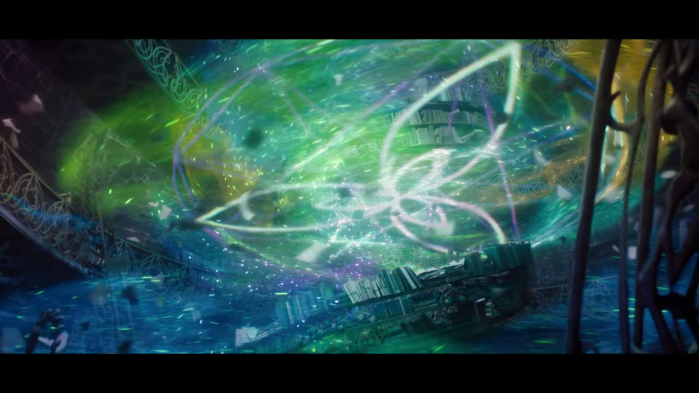 Marni Hill – Honestly, I would be satisfied to call the entire series of the Dark Crystal: Age of Resistance stunningly perfect and leave it there. However, that wouldn’t be much of a review would it? Especially if there’s no evidence to back up such a bold statement. Rather than plod through the plot, I’m more interested in discussing the themes and ideals that create the relationships between the characters and Thra itself.

The introduction (or reintroduction if the case may be) to Thra is colourful and vibrant, a clear indicator of the standards people should be setting for the season. Sigourney Weaver brings mystical narration as the Myth-Speaker as the audience learns of the Crystal’s history, Aughra, the Skeksis and the seven Gelfling clans.

While we don’t see Aughra until the second episode, I want to talk about her first as she is the embodiment of Thra itself. It came as a surprise to learn that such a wise being could be deceived by the Skeksis into voluntarily taking herself out of commission. Her desire to search the stars for knowledge she can teach Thra is a noble one, but unfortunately blinding Her third eye has been closed and she must reopen it if she wants to know what or who is harming Thra. Among many other things, the writers for this series did a wonderful job in giving Aughra her own learning curve, not common for an omnipresent character in fiction. 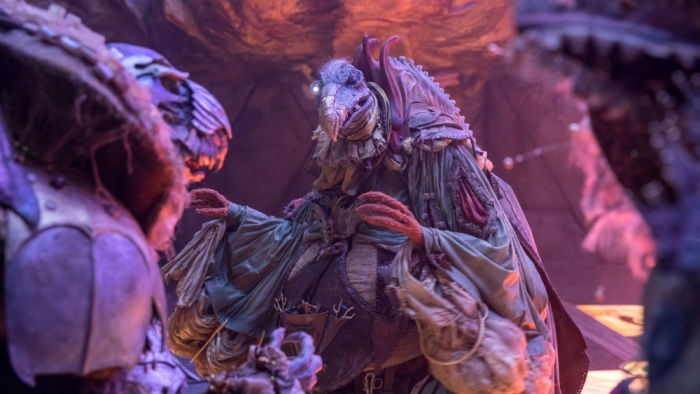 We meet the Skeksis first and unsurprisingly, they remain the most interesting characters in the episode. That is absolutely no slight against our new Gelfling heroes. Those who are a fan of the original film already have a relationship with the Skeksis and therefore find themselves quickly reacquainted with their favourite villains. As you’d expect, the audience is immediately thrown into the chaos of politics, games and tiptoeing within the Castle. If it’s not skekSo the Emperor backing skekTek the Scientist into a proverbial corner when it comes to solving their immortality issues, it’s skekSil the Chamberlain stalking in the shadows waiting to play all the others like a well-tuned violin. It’s like a heinous game of musical chairs, where the Emperor is the set of chairs and the other Lords must scramble as not to get caught out by the others.

Chamberlain is ruthless in his deceit in Episode 2. He is a proverbial chess-master, twisting the Skeksis’ misfortunes back in their favour before any consequences even appear. He pins the murder of Mira on Rian and ensures it’s spread through the Castle like wildfire. It’s not enough to try and steal the last of Mira’s essence, pinning the eventual loss of the vial on skekTek, leading to the horrifying, sadistic loss of skekTek’s eye.

Upon a second viewing, there’s a certain theme of time and generation running through the first episode. Those who accept the changing of time, those who protect the traditions established by it and those who will sink to the lowest of levels to fight against it. The Skeksis are obviously the latter, but what about the Gelfling?

Stone-in-the-Wood, Castle Guard Rian is the type of Gelfling you’d expect to go through the usual Heroes Journey. Self-assured, playful, has a lot to prove and believes he knows exactly how to do so. His relationship with fellow Guard Mira is heart-warming and affectionate, which makes the episodes conclusion even more sympathetic. In terms of generation, his father being the Captain of the Castle Guards is a barrier Rian can’t help but feel he must cross in order to prove some undefined point.

But of course, priorities change. The Skeksis know Rian witnessed Mira’s draining and knowing where the loyalties lie within his best friend Gurjin becomes more important than ever. Gurjin comes through and together, they try to grab a hold of Mira’s essence. It almost works too, but Gurjin is forced to show the full extent of his loyalty and Rian is able to run (well, jump, but you get the idea).

Vapran Princess Brea is an anomaly amongst her two sisters and All-Maudra. The need to uphold tradition, especially with the Skeksis breathing down their necks, is of upmost importance. Brea, however, begins to see differently, as her interactions with the Skeksis in the carriage and the events of the tithing contradict the morality she had developed during her countless hours in the study. Every attempt to see beyond tradition is quickly and bluntly rebutted. This, luckily, only spurs her on to continue.

Turning to the Sifa clan in Episode 2, Brea’s altercation with Elder Cadia is a prime example of the cultural barriers between the clans. There is immediate distrust within Brea, relying on old stigmas such as the Sifa never doing anything for free to pass first judgement. While her lack of faith proves helpful, preventing her memory from being wiped, Sifa Onica comes through. Onica, Cadia’s apprentice is another example of the gap in generations, seeing hope where Cadia sees death. It’s now up to Brea to choose between the truth and the loyalty to her mother and sisters.

Finally, down in Grot, adorable Deet is given the C-plot for this episode. After the run-in with the Darkened mother Nurloc, Deet gives us the first glance at Thra’s inner workings. The Sanctuary Tree is sentient and like any decent ancient tree, holds great knowledge, including the idea that Deet is the perfect Gelfling to send above-ground. Her empathy for the creatures of Thra is enough to carry her forward to complete the task at hand. Grot is a place where Time has somewhat become a construct. The Grottan clan is unaware of how time has changed the world above them. Deet is the perfect character for newcomers to Thra to experience the world through.

One of the most endearing friendships in the series is that between Deet and Hup, the brave little Podling with the spirit of a Paladin and a wooden spoon to prove it. It’s a friendship established through the horror of the Darkening and only grows as their journey to Ha’rar quickly gets side-tracked.

Episodes 1 & 2 of The Dark Crystal: Age of Resistance establishes Thra as a fully realised world with a multitude of creatures, cultures, traditions and a rich history of triumphs, lies and deceit. Rian, Brea and Deet are complex, well-thought out protagonists, the opposite of Jen and Kira in the original film, which is somewhat of a relief. The Skeksis are as entertaining and foreboding as ever. Louis Leterrier, the writers, the puppeteers and the voice actors have a lot to be proud of here.

Now that the main characters have been established, I’d like to talk more about the new characters and the production of the series in next weeks review. See you then with episodes 3&4!