Jarrod Fairclough – If I were to ask you ‘What is the best Muppet Christmas production?’, most of you would give similar responses.  The Muppet Christmas Carol.  Muppet Family Christmas.  Maybe even Letters To Santa (but probably not).  And sure, all of those are fine choices.  All of them have heart, and humor, and give us the warm fuzzies we cherish around the holidays.  But I’m sorry to have to tell you that you’re all wrong, because there is only one correct answer.  “Tales From The Vet Christmas Party ’93” from Muppets Tonight.

Yes, this 4 minute sketch holds the distinction that we’ve been callously handing off to far inferior films and specials for much too long.  And if you don’t believe me, I’ve taken three of the most important aspects of film making and will compare accordingly; Performance, Character Development, and Plot.

Performance.
Any good piece of film or television requires actors who are able to pull off the multitude of tasks handed to them.  We need to believe that they are saying these things for the first time, that they truly do love or hate their fellow character.  Performance can make or break a piece, and “Christmas Party ’93” has it in spades.

Look at Jim Henson’s performance as Kermit in Muppet Family Christmas.  He spends a large chunk of the special concerned about Miss Piggy, who is making her way to Emily Bear’s house in a blizzard.  Jim was full of heart, this we knew.  But it was something we had come to expect from him over the years.  ‘Rainbow Connection’.  ‘Bein’ Green’.  All examples of Kermit’s thoughtful nature.  Say what you will about Kermit in this special, but he’s exactly what you’d imagine him to be.

Michael Caine’s Ebenezor Scrooge in Muppet Christmas Carol is without a doubt a powerhouse of acting.  But it’s no surprise seeing Caine get dramatic, is it?  Sure, he brings a lot of gravitus, but when has he ever not?  We know going in to this film that Caine is going to deliver an award winning performance.  There’s no surprise.  Not like Brian’s performance of Dr Phil Van Neuter.

Brian’s portrayal of Phil in “Christmas Part ’93” is one of the most nuanced in Muppet history.  Sure, it would be easy to ‘go big’ and always play him as a mad scientist, which is often where Brian goes with him.  This episode of Tales of the Vet however gives us a chance to gain a deeper understanding of Phil, and understand the pain of what is underneath him as a character, which is all due to Brian Henson.  I can’t imagine there was much room for Brian to go with Sal Minella, or with Seymour.  No, this was Brian’s chance to show a wide range of emotion, and he nailed it.

Character Development.
As beloved as it is, Character Development is not Muppet Family Christmas‘ strong suit.  Arguably the most character development anyone has in the special is Doc from Fraggle Rock, and he only goes from slightly inconvenienced by the Muppets arrival to overjoyed.  Aside from that, everyone stays pretty much consistant with how we’ve come to expect them to behave.  Piggy is selfish and determined, Kermit is caring, Fozzie is trying to be funny.  You could perhaps argue that The Swedish Chef shows development when he decides against, you know, straight up murdering Big Bird, but he’s still known to cook talking food now, so who’s to say that stuck?

Then there’s Scrooge again.  A Christmas Carol is a well-worn story, with everyone from Yosemite Sam, Fred Flinstone and Scrooge McDuck taking on the main role.  Scrooge goes from being a bitter, hate filled, greed machine to a warm, loving, generous man all in the space of a single night.  Sure, that’s character development.  But it’s not true character development.  It could be said that the only reason Scrooge changes is because of his fear of a miserable afterlife, which becomes an allegory for Heaven and Hell, which becomes an entirely different type of story.  He’s only being nice because he doesn’t want the chains that weigh down Jacob (and Robert) Marley.  He’s doing it for a prize.  It’s moral dessert.  It’s Philosophy 101.  It’s not true character development.

Dr Phil Van Neuter, however, shows more character arc in 4 minutes than any of those other productions.  Okay, yes, he might do a ‘reverse Scrooge’, going from warm to bitter, but none the less, it’s a natural change.  He begins by thanking everyone for their wonderful work, and then as he gets drunker and sadder, he begins to alienate those around him, while getting in touch with his own emotions.  His behaviour is explained as he complains to Ghosty that he was never allowed to play in Little League, which means his past is a huge factor in his present.  He didn’t sell enough chocolate at Christmas time, meaning he missed out on bonding experiences.  It’s sad, but it gives us an insight into the man we know as Dr Phil Van Neuter.  It also explains why he boasts about having a Platinum Card, while the others only have green ones.  He’s proud of himself for achieving something in adulthood, but he doesn’t know how to show it without rubbing it in, because he wasn’t around other children when he was younger.  His drunken behaviour, his dancing, his swearing, his chanting of ‘Eggy Noggy’ – it’s all the sign of a sad, lonely man, something we come to understand throughout the party. 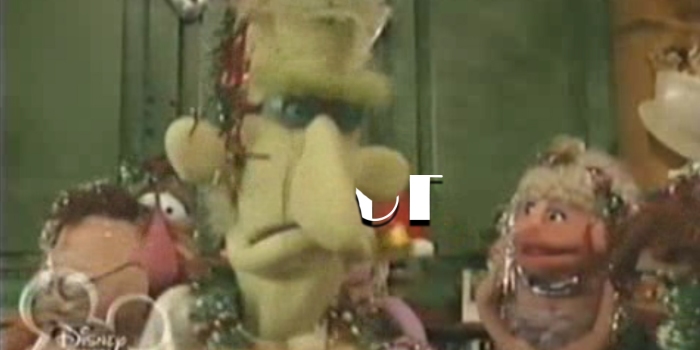 Plot.
Muppet Family Christmas has a flimsy plot, which is only designed to have The Muppets, Sesame Street and Fraggle Rock intersect in same way.  There’s no real stakes to the story, with a predictable ending in sight the entire time.  Miss Piggy is missing in a blizzard?  We all know she’s rocking up at the last minute.  Gonzo is jealous of a turkey hitting on Camilla?  We all know the hose nose and the hen are going to end up together.  Bert is annoyed at Ernie?  What else is new.  Kermit and Robin just happen to find a Fraggle hole that leads directly to Gobo and the gang?  It’s a little contrived.  Yes, it all works to make a fun, heart warming special, but is it really enough to hold our attention?  Or is it the novelty factor that makes it so beloved?

Muppet Christmas Carol suffers from the fatigue of being based on a well known piece of literature.  It’s obvious to anyone who hears the title that Scrooge is going to go from horrible to nice.  They know that Bob Cratchit is going to have a sick son.  There’s no real surprise to the piece.  Which isn’t the film’s fault, not by a long shot, but perhaps there could have been a different way to go with it.  Again, is it the novelty of seeing these characters in such a different way that holds our attention?  Because the storyline is predictable and well trodded.

“Christmas Party ’93” however takes us on a whirl wind adventure in just a few minutes.  Mulch plays the wrong tape, and we see Dr Phil Van Neuter thank his staff for their work on Tales From The Vet.  As he drinks his egg nog, he becomes more and more inebriated, crying to a ghost ornament, singing to his beverage, dancing wildly, and eventually having a nervous breakdown, calling everyone free loaders before passing out.  It’s an unexpected story coming from a character we’ve barely seen, which adds to the excitement and enjoyment while watching it.  It’s also a lot more engaging than the others.

So there you have it.  Indisputable evidence that Tales From The Vet “Christmas Part ’93” is without a doubt the best Christmas production The Muppets have ever been a part of.  Dr Phil Van Neuter has more nuance to him than most other Muppets, and he will forever be a treasured member of the Muppet family.

It goes without saying that this entire thing was a parody, right?  I don’t mean most of what I just wrote.