Jarrod Fairclough – It’s May 9th!  You know what that means – It’s here! It’s Lost Sock Memorial Day again already!  Yes folks, today is the time where we come together to remember that one sock you lost that time you were doing laundry.  Where could it have gone?  Could it have fallen behind the machine?  Could it have transported to the land of Narnia?  Who’s to say.  The Fraggles, that’s who!  Released in 1986, Boober and Wembley starred in their own tale of mystery, The Case of the Missing Socks.  Written by Rebecca Grand and illustrated by Jeffrey Severn, the book is a fun little story about love trumping fear and the beauty to be seen when you go looking for it. 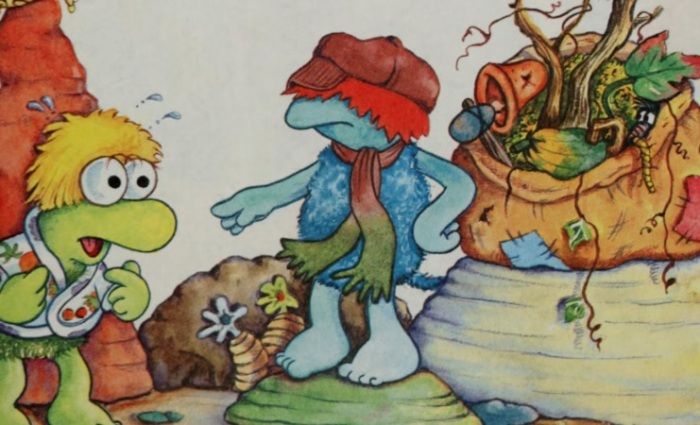 The tale begins as Wembley is alerted by a shouting Boober, who is complaining of a sock thief.  Obviously no-one in Fraggle Rock could be a thief, so the pair hatch a plan to catch the culprit in the act.  When that plan failed, they head for the Gorg’s garden where they discover, high in a tree, that a flutterbug has stolen the socks to use as sleeping bags for its babies.  Awwww etc.

Surprisingly, the action hero role in the story is taken by Boober of all people, who is famously terrified of everything.  But Grand makes a point of saying at multiple times that Boober’s love of socks trumps his fear of ‘Big Blue-Nosed Groobles’ or whatever other nonsense Wembley can come up with.  But action-Boober works, better than I think Gobo or Red might in a similar role.  In fact neither they nor Mokey nor any Gorgs are anywhere to be seen, not even mentioned.  The Doozers get a little cameo on one page though, as they attempt to swim (also impossible, according to Wembley).  The fraidy-cat role is played by Wembley, and in classic Wembley fashion, Grand can’t seem to decide if he should be a willing participant or not, because he goes from terrified to willing on almost every page, but not in a way that it seems intentional.

The illustrations are far and away the best part of the book, with Severson’s watercolor work really effective.  The characters are perfectly on model while still being different to the animated series’ look, and even in a scanned format, the colors are vibrant and gorgeous.  I’m amazed at how expressive each picture is, so credit to Severn for that.

The book is out of print (it’s 32 years old, for crying out loud) but there’s a surprising amount of them available online through Amazon, eBay and AbeBooks.  However, if you’d rather just give it a read online like I did, Archive.org have it on their site for free, you just need to sign up and you’ll be able to borrow it for 14 days!