Warning: This review contains spoilers for the new documentary Muppet Guys Talking, so don’t read on unless you want to know specifics, or unless you’ve gone to MuppetGuysTalking.com and purchased the film.  You should definitely do that, by the way.  There’s 2 options available, with a VIP option for those with deeper pockets.  Go now!  NOW!

Jarrod Fairclough – Muppet Guys Talking opens with director and Muppet performer Frank Oz, showing off the now famous Muppet Pipes, which were created by Frank, Don Sahlin, Jerry Juhl, and of course, Jim Henson, during the downtime before the shooting of The Jack Paar Show in 1964.  As Frank discusses the reasons for the decorations, he reveals just why they’re so important to him – This is the spirit of The Muppets.  And if you weren’t going to call this documentary Muppet Guys Talking, you could absolutely have called it The Spirit of The Muppets, because that one single line perfectly encapsulates this 65 minute documentary.

The film, originally shot in 2012 in New York, features Frank, Fran Brill, Dave Goelz, Bill Barretta and the late Jerry Nelson, as they talk about their time with The Muppets, creating their individual various characters, and their memories of Muppet founder Jim Henson, who passed away in 1990.  In my spoiler free review on Monday, I spoke about Jim’s presence in the documentary, but allow me now to go in to a little more detail.

At multiple times, Frank talks about Jim in the present tense, and it’s because in each story about him, these performers make him come alive.  Whether it’s Dave recounting how Jim rushed back from his own mothers funeral just to have breakfast with him, or Jerry Nelson’s hilarious story about an archer shooting an arrow at a puppet he and Jim were performing, all of them have such a wealth of love for Jim that it’s easy to see why he’s still so prevelent in their lives, and ours, almost three decades since his passing.  When all 4 performers aside from Bill talk about his humor and wisdom, they do their little Jim impersonations, incidently sounding a lot like Kermit.  They talk about the environment that Jim created, one that nurtured playful silliness without judgement.  Jerry talks about Jim’s work ethic on an overnight flight.  Dave tells a hilariously heartwarming story about Jim calling him when he worked for Hewlett Packard.  Honestly, this whole review could be filled with the stories the Muppet Guys told about their fearless leader, because there’s at least another 5 paragraphs full of them, and each one connects not only with their friends hearing it, but with the audience as well, which is a huge testiment to not only the performers telling the stories, but to Jim as well.

The whole time, we’re not just the fly on the wall while a group of friends have a laugh.  After over 50 years of friendship, these guys have a rapport that can’t easily be matched, and the laughter and teasing and affection is palpable, to the point where it almost feels like you’re part of the conversation.  Fran refers to them as brothers on a couple of occassions.  Dave refers to the dynamic as ‘kind and generous’, which he says he and Bill still feel with the group of new guys performing these characters.  And he’s not wrong, the entire conversation, even when it gets teasingly nasty, is filled with kindness and generosity.  During a quick break in filming, we’re shown the gang getting coffee, and Frank’s first port of call is to ask a frail Jerry Nelson if he’s okay, and if he wants anything.  Then, he tells Bill he’s free to leave now, because it wouldn’t be Frank without a little sour with his sweet.  It’s a natural moment of kinship, and it’s one of my favorite moments of Muppet Guys Talking.

The film’s also educational.  Hardcore fans will be familiar with a lot of the stories and information presented, but there’s also a lot I didn’t know.  I learnt that Howard Tubman came about in the moment when Bill put on a Viking Pig, and I learnt that Frank was the first Muppet performer Dave ever met (he had 2 questions, 1 of which was about Grover’s nose).  But I also learnt what flaws in Dave make Gonzo, Bunsen and Zoot.  I learnt that Frank sees Fozzie as the only guy without a key to The Muppet Theater.  I learnt how Fran made Prairie Dawn more willful.  This film is as much about the characters as it is about the performers.  We’re even treated to the rarest of rare – Frank Oz doing a Muppet voice without a Muppet on his hand.  Admittedly, it’s just Grover saying ‘Hmm?’, but we’ll take what we can at this point.  It’s also told just how important everyone in the creating process is to a character, down to how the Muppets feel on the inside when they’re built.  It’s a quick, but fascinating glimpse in to the process, and we’re given just a moment of an interview with Jerry Juhl from way back.

There are two quotes at the end of Muppet Guys Talking that I feel need to be given in their entirety.  The first is by the late Jerry Nelson, who treats us to one last piece of wisdom, as he talks on why The Muppets are so special to so many people;
A lot of people who feel disenfranchised in life, feel accepted in that Muppet world…  Kids know when somebody’s a little different, and they usually are not nice about it.  I think that The Muppets is something that they can relate to because of a lot of their own, uh, being shunned, or whatever, being a little different, which they are, you know?  They’re bears and frogs and chickens and pigs hanging out together.

The other is by Dave Goelz, when producer Victoria Labalme asks what the nobility behind his work is;
Folly.  It’s folly.  Human folly.  You know?  It’s celebrating the degree to which we’re all lost, you know?

These two quotes sum up so much for me.  They sum up so much why these characters work.  Some of us feel so lost in this world, that it’s nice to see a rag tam team of misfits get together, because it reminds us that we’re not alone.  It’s a terrifying moment in your life when you realize the adults don’t have all the answers.  But maybe, when we’re together, we can forget that and have some fun, and that’s where Muppet Guys Talking shines.  It celebrates folly.  And we’d all do well to celebrate that a little more.

Bonus: During our interview with Frank Oz (Part 1 here and Part 2 here), I asked Frank just what ‘The Camel’ is, seeing as the last few moments of Muppet Guys Talking is dedicated to Dave teasing him about it.  He wouldn’t tell me, instead just saying:

Frank: ‘The Camel’ is something that will forever be in the heart of Dave Goelz, and nowhere else…

It was worth a shot! 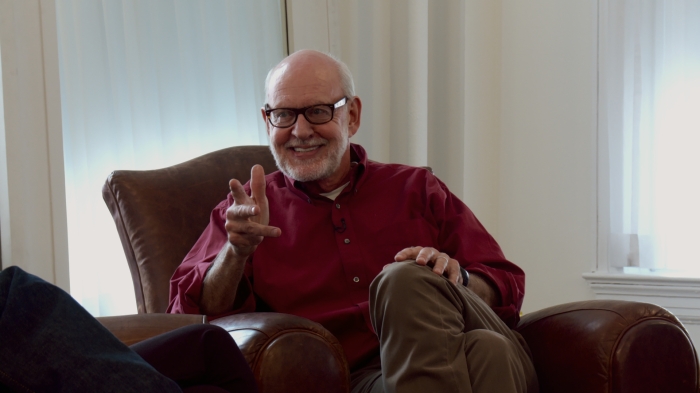