Abigail Maughan – Halloween is fast approaching, Muppet fans! This year we celebrate with our copies of The Muppets Meet the Classics: The Phantom of the Opera and applaud the grand return of Winky Pinkerton. Between that and our double feature of the Vincent Price and Alice Cooper episodes of The Muppet Show, we should remember that Fraggle Rock is also seasonally appropriate viewing content.

We all know that Fraggle Rock is really good at being emotionally scary. Fraggle Rock is also amazing at being plain old traditionally scary as well, making for some of the most fun and/or memorable episodes. Fraggles live rather dangerous lives, what with the monsters, killer plants, and magic manipulative rabbit-creatures that also share their Rock. Let’s test our baloobiouses, as it were, and remember some of the spookiest monsters and moments on the show, when worries could not be saved for another day.

Fraggles have encountered Silly Creatures’ Halloween celebrations on two separate occasions in two separate mediums. Tis the season, so let’s look at both of those occasions.

Traveling Matt experienced trick-or-treating in the episode “Sir Hubris and the Gorgs,” observing that Silly Creatures (two of whom are dressed as Kermit and Miss Piggy) are given food when they disguise themselves. Matt is also mistaken for a costumed reveler and is summarily rewarded with a lollipop. “It’s amazing what can happen when someone thinks you’re something that you’re not,” he concludes. The account inspires Gobo and company to disguise themselves as the legendary Gorg messiah Sir Hubris and instructs the Gorgs to leave their castle, but they quickly work to undo their persuasion when they realize that the end of the Gorgs means the end of their radishes. 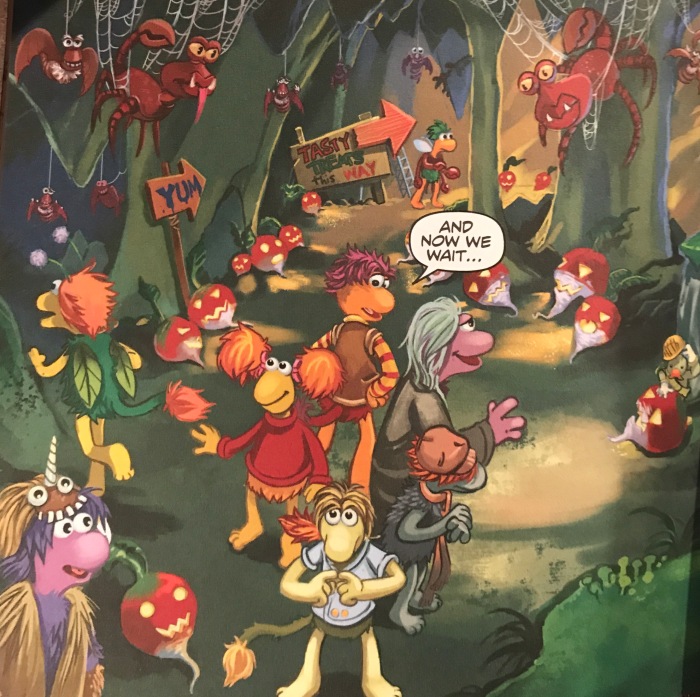 As opposed to the brief scene in “Sir Hubris,” Halloween becomes the plot of the Fraggle comic “Monsters from Outer Space,” printed in the second volume of Fraggle Rock Classics. Traveling Matt encounters trick-or-treating once again, and this time he finds it much more disturbing. He perceives trick-or-treaters not as disguised Silly Creatures, but as actual monsters, who invade the homes of Silly Creatures and threaten them out of their sweets. The Fraggles back at home fear for their own sweets, and prepare to fend off their own invasion with suitably frightening decorations like radish jack-o-lanterns and fake batworms. 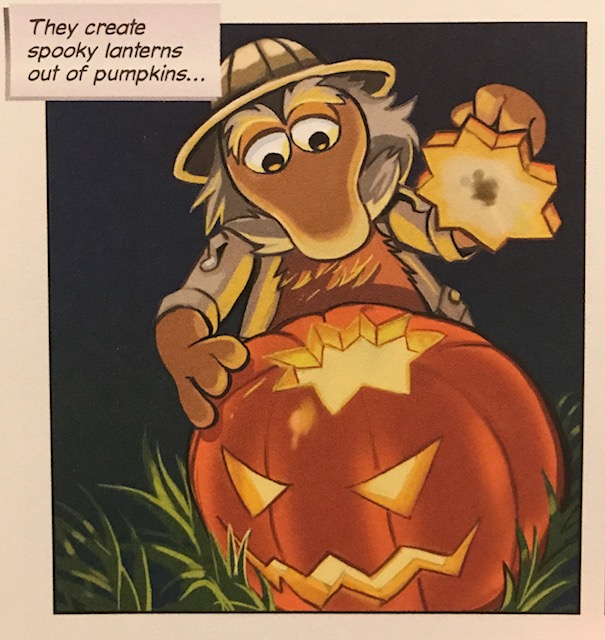 Gobo thinks it’s fun, Boober is panicky, Red enlists the Doozers, and Mokey dresses herself up as Lanford, which is adorable. Matt arrives and apologizes for the panic, announcing that he should have fact-checked his postcard before sending it, which tells me that Matt has in fact been replaced by an alien body-snatcher.

A disconcerting but admittedly favorite episode of mine, Boober flees to the isolated Caves of Boredom to escape from the noise of Fraggle Rock. It becomes clear that the caves are isolated because any previous visitors have been eaten by the plants which live inside of it, flowers which release a mist that slowly erases a Fraggle’s memory, before ensnaring their catatonic bodies in vines forever. So we get some chilling scenes of Wembley and Boober stumbling around the caves attempting to sing a song but forgetting all the words to it, and then each other, and then themselves. Meaning, this wasn’t the best episode to show to those little kids I used to babysit as their second exposure to Fraggle Rock. I see that now.

Wembley: So these are the Caves of Boredom… funny, they don’t look boring, do they?

When Gobo, Mokey, and Red show up to rescue them, they are also immediately incapacitated by the plants. It’s not because they aren’t prepared; they taped lists of their objectives to each other’s backs. What they weren’t prepared for is the plants making them forget how to read. Our Fraggles escape, but according to the Storyteller, at least two past Fraggles have disappeared in there. Yikes.

Wembley releases a genie from a bottle, a recipe for disaster no matter what story you’re in. The Mean Genie, an intriguingly off-putting being performed by Richard Hunt, breaks things, insults people, and tries to turn Wembley against his friends. Oh yeah, also he is capable of mass mind control, a fact you’d think Gobo and Red would find pertinent enough to inform Wembley of right away after researching the genie in the Encyclopedia Fragglia.

Gobo: He’s going to get you in trouble! I think he even stole my postcard.

Sure, Gobo. That’s just as important.

The genie takes over all of the Fraggles sans Wembley and leads them in a rockin’ anthem of delinquency. Wembley manages to save the day, but not before the genie can scar us forever with the image of his hypnotized Fraggle army.

Eternally helpful Mokey is lured by the wails of John Pattison’s incredibly eerie Begooney, the self-proclaimed “most pathetic creature in the world,” who demands her friendship at the expense of the rest of her life and the people and activities in it. He is simpering and obsessive, repeatedly summons Mokey telepathically, and becomes enraged when he learns she has other friends. “This one’s not going to leave me,” he declares, “not if I can help it.” Begooney casts a spell on Mokey to make her shrink, eventually small enough that he can trap her in a tiny house he’s built. Red intervenes, physically fighting Begooney so Mokey can escape, and the spell is broken when Mokey makes a speech defying him and refusing to be his friend. 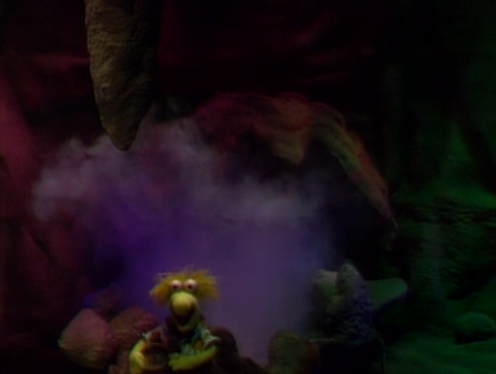 Fraggle Rock sure is a dangerous place to live; even the caves are out to get you. The Storyteller relays through song the legend of the Terrible Tunnel, an apparently sentient cave with a bloodlust. Years and years ago, ancient Fraggles routinely vanished into it. It took the efforts of the brave Fraggle warrior Sir Blunderbrain to save them, at the cost of being trapped in the cave forever himself, after which the tunnel disappeared. In the present, the tunnel has fallen into the realm of mere superstition, or so we think. It reappears and creepily calls to Wembley, who ends up saving himself, Gobo, and Red from its ravenous maw. We hope the Fraggles eventually put up warning signs this time because apparently, the ghostly voices emanating from the tunnel are not enough of a deterrent.

Storyteller: And then he heard the spirits who cried their sad refrain,

It was all the Fraggles who had gone and never come again.

Yes, all the Fraggles who had gone and never come again!

Skenfrith, Believe It or Not

Skenfrith doesn’t want to be a monster. He really doesn’t. However, Skenfrith is an involuntary shapeshifter cursed to transform into whatever someone believes he is. So when Skenfrith is trapped in the Gorg’s basement and they believe there’s a giant two-headed monster down there, you better believe Skenfrith has no choice but to morph into a giant two-headed monster. Poor Skenfrith. Maybe evolution was the real monster all along.

The Glob, Boober and the Glob

A big pink glob monster rolls into Fraggle Rock and proceeds to eat several Doozers. Almost scarier, Boober and Cotterpin seem to be the only ones alarmed by this.

Mokey and Red are pursued by a mobile mass of boulders known as the Avalanche Monster on their trek to Wonder Mountain. It doesn’t do much but chase them and shout “AVALANCHE!,” but the thing is massive and angry and I would be running too, even though it is a truly impressive puppet. The enemy of the girls’ enemy is their friend in this case, and the Avalanche Monster is subdued by the singing cacti that populate Wonder Mountain, who sing a do-wop siren song to mesmerize travelers. What’s with all the mind control down in Fraggle Rock?

From left to right: Boober, Mokey, Gobo, the Invisible Garboil, Red, and Wembley.

The second most destructive emotional crisis of Gobo’s life (looking at you, Festival of the Bells) leads to the release of the Invisible Garboil who dwells in the Great Outer Maze. The Garboil is a threat that the Fraggles take very seriously: it leaves a whirlwind of destruction in its wake, the Fraggles cower and fear for their lives, and Gobo’s and Boober’s dialogue indicate that it can crush and flatten unsuspecting Fraggles. Judging by the hole Gobo traps it in, however, the Garboil doesn’t appear to be more than a foot tall, unless it is an invertebrate that can fit through any size of hole, like an octopus.

This guy’s a menace and we all know it.

Life in Fraggle Rock is ideal in a lot of ways, but it’s not quite as carefree as a certain theme song would lead us to believe. And aren’t we glad that’s the case, because these frightening Fraggle antagonists and contrary creatures create some of the most intense conflicts and opportunities for our heroes to use their wits and bravery? So this Halloween, go ahead and dance your cares away. Just make sure you’re not in a mysterious new cave when you do.