Click here to check out Part 1 of our interview with Kirk Thatcher, where he talked working on Lazytown, Fosters Home For Imaginary Friends and Sid The Science Kid!

Amy Banks: I’d like to talk about the show Dinosaurs, and share the following excerpt from a January 22, 2015 interview on The Muppet Mindset with interviewer Mitchell Stein. You said:

“The thing about Dinosaurs was how it was about Dinosaurs thinking for themselves and not to the future ahead of them and what the consequences would be six or seven generations later. So we were trying to say “Dinosaur thinking leads to extinction” and what your actions might do down the line, instead of just trying to fix the issue at the moment.  So we found it especially fitting to be chosen as the final episode since it was kind of the premise of the show, is that this is what happens when you think you own the world and do whatever you want and change the eco-system to fit your idea of what’s right for you as opposed to what’s right for everything else on the planet.”

Can that be related to the politics of today and Trump pulling the U.S. out of the Paris Accord? Would Earl Sinclair have been a Trump supporter?

KT: [laughing] Yeah, well, it’s funny you asked that about Dinosaurs. I said we should bring it back, have B.P. Richfield now the president of the failing Pangea and of course Earl would be a staunch supporter and Robbie would be wanting to support the first herbivore president, and his dad would be like that could never happen because herbivores can’t protect you and carnivores can. I said that baby dinosaur is now a total slacker that lives in the basement of his parent’s house and just plays video games and is depressed because the world is crappy and he’s inheriting a world that basically has no future. They all wear parkas and walk around in the snow and try to get by as things collapse around them….So, basically a feel good romp!

The final episode delivered on the premise that dinosaur thinking will lead to your extinction. But  it’s funny how articles in Ranker or Blender or Buzzfeed or those kind of online sites have done articles about how prescient it was and it’s probably more prescient now that it was then. You know we were just coming out of Reaganomics and I was not very political at the time; the other writers were very political. I was just more interested in making monsters and movies and having fun with the broader aspects of the concept. In the early concept stages, Jim [Henson] and I would talk about dinosaur type thinking and I was environmentally aware so I was political in that sense.

Now I have much more of an opinion on politics and, pretty much everything else. I don’t share it very much because my opinions aren’t any more important than anyone else’s. With Facebook I have friends on both sides of the fence who write these long diatribes about how great or how horrible things are or should be or would be or could be. And I always enjoy it because it’s interesting to read a differing point of view and go oh, I agree with that or don’t agree with that. I never think I’m going to change anyone’s opinion. I guess if I thought of something really pithy and I thought if I could look at this in a way that makes sense to me I might share it. I thought about it a couple of times with Trump in office, just going, I don’t understand. It’s really I’m more perplexed than anything else about our whole situation right now, about where America is and what’s going on. But yeah, I think the show was somewhat prescient and yes, I think Earl would’ve been a Trump supporter.

AB: Do you foresee a Trump Muppet?

KT: Probably not. Now that they’re owned by Disney [the Muppets] they’re very a-political, they’re safe. They kind of have to be, it’s all part of being under the umbrella of a large, Multi national Corporation with a reputation to maintain. The Muppets shouldn’t be political anyway, it’s not their wheelhouse. If anything I try to fight to push more for the insanity and the weirdness and the goofiness inherent in the Muppet world. I want to explore things like, what does Uncle Deadly do on the weekends? Does he go out at night and drink alone at bars or stay home and watch Fox news and yell at the tv? What is Lew Zealand doing when he’s not throwing fish? Is he married? I always thought Lew should have this gorgeous super model wife like Jessica Rabbit and she’s with him because he makes her laugh and she takes care of the fish and she’s an animal lover that he found at a PETA rally or some rally to save the fish and the oceans. They are madly in love and have three fish children. To me that’s fun and weird and it’s not necessarily political but it’s expanding the Muppet universe into other stories other than what are Kermit and Piggy doing relationship wise. I think they have been married at least two if not three times already…Let’s give that a rest…Actually, I would love to explore their married life and see what their kids would be like! Can you imagine Piggy pregnant…That I would want to see…and write and direct!!! 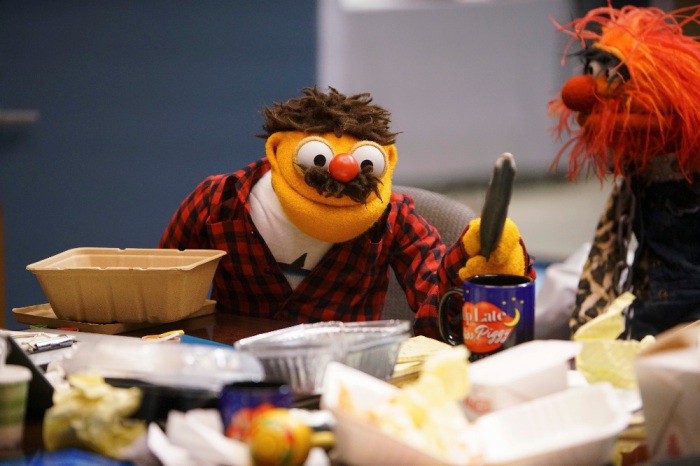 AB: Are there any current projects you’re working on that you can talk about?

KT: The only thing I can talk about is what I’m currently working on, which is the live show at the Hollywood Bowl. It’s amazing in that it’s essentially a live tv show. The biggest trick has been, or the biggest question is, how do you hide the puppeteers? And because the Hollywood Bowl is so big, most people will watch it on the huge television screens they have set up around the stage. Especially with the Muppets, because Kermit is the size of your elbow to your hand, so basically you have a star who is 18 inches tall…and the closest people will be to him is at least 25 feet away. But we don’t want people seeing, at least on camera, half-body Kermits floating around talking to people with a guys head just under where Kermit’s rear end would be. So it’s got to be a very specifically presented type of live show and you know, if you want to see how the sausage is made, you can just look at the stage and literally see the man behind the curtain, as it were. So we’re going to put the performers in black suits, black leotards, black ninja costumes essentially, so your mind can kind of turn them off if you want to maintain the illusion and just watch the big television screens and peek over at the stage once in a while. It’s like when you see Walking With Dinosaurs and you see human legs underneath the raptors but they’re in black leotards and the suits are so amazing you just kind of ignore it and enjoy the illusion of life.

It’s a very involved type of live show with live music and pre-taped music, live video and then pre-taped video, live talking and singing plus pre-recorded elements, all coming together with Muppets and people who are dancing and singing and performing along with them. It’s insane. I mean it’s probably the hardest thing in some ways we’ve done because it’s all done in real time. If there’s a mistake, you’ve got to keep going. I’m co-directing it with a lovely guy named Andrew Williams who is the Vice president and creative director of Soapbox Films. They’ve done every Muppet video and most of the commercials for the last 10 years. So all of the viral videos you’ve seen and most of the commercials, if not all of them, have been produced through them. They’re a great team to collaborate with, so Andrew and I are co directing which is great because it’s a huge job and I think one person’s head would explode if they had to do it all themselves. He and I are also co-writing it along with Jim Lewis who has been the longest surviving Muppet writer; I’ve been working with Jim since 1985 I think, and a fellow named Matthew Barnett who’s also a creative at Soapbox. So I’m very glad we’re spitting the responsibilities because it’s a big job with so many moving parts and Andrew is well suited to focus on some of the aspects of the show and I’m well suited to concentrate on others and so I think we complement each other. Also, we compliment each other. Sometimes he compliments my hat…other times I admire his ideas…you know, a true collaboration based on hats and ideas! The Muppets Live will be at the Hollywood Bowl September 8-10, 2017.

Also, this just happened this week!  I’ve been hired to Executive produce and be the Showrunner for a new series by the Henson Company that will air on Netflix next year. I can’t say anything more about it at this time, but keep an eye out for announcements coming later this year!!!

Our thanks to Kirk Thatcher for taking the time to do such great interview, and to Amy Banks for offering the piece up in the first place!