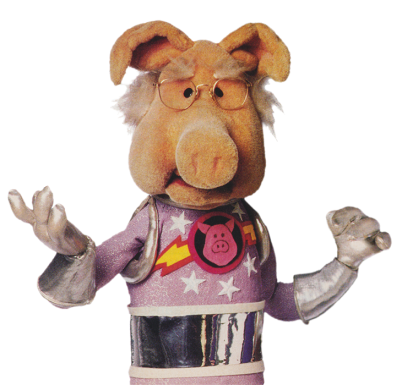 D.W McKim – Miss Piggy’s been making lots of waves lately as she’s been hitting the publicity rounds.  Most of her recent appearances have been to promote her recent work with Kate Spade.  Or just being a Muppet ambassador of holiday cheer (because what’s the holiday season without Muppets, you know?)  And now with the release of the “Pigs in Space” viral videos, that gives her another project to simultaneously promote.  But besides Miss Piggy herself, wouldn’t this be such a golden opportunity to also bring on Link Hogthrob and Dr. Julius Strangepork along with her on the talk show circuit?

I particularly find this idea appealing because as a longtime obsessed Muppet Freak, i spend way too much time thinking about any number of subjects pertaining to different elements of The Muppets!  One specific area i’ve given a lot of thought to over the last few years has been in relation to Julius Strangepork… 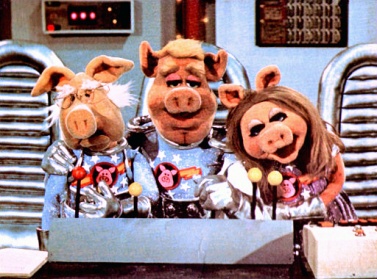 Unlike Miss Piggy and Link who have regularly been a part of “backstage plots”, Strangepork still remains a bit of an enigma in terms of what fans know about his “offstage” persona.  Outside of “Pigs in Space”, he’s made several other appearances in songs and sketches – typically when the troupe needs either additional pigs or someone to be German (or both).  His extensive resume includes Fritz the director in the Liza Minnelli murder mystery play.  The beach commissioner on “Bay of Pigswatch”.  A surprise cameo role in “Muppet Christmas Carol” as one of Fred’s dinner party guests.  But just about the only time we do see him is in “onstage” roles, never really part of the backstage behind-the-scenes action aside from silent cameos or one-liner gags.

So just what is the “offstage” Strangepork like and how much is he the same as or different than the persona of his most famous role in “Pigs in Space”?  Is he a “Doctor” in real life or just “plays one of t.v.?”  (And if he is, is his area of expertise in a totally unrelated field?)  This is actually the exact kind of thing i was really hoping 2015’s “The Muppets” would explore but Julius never even got a chance to appear on the show despite being an extra in its pitch reel. 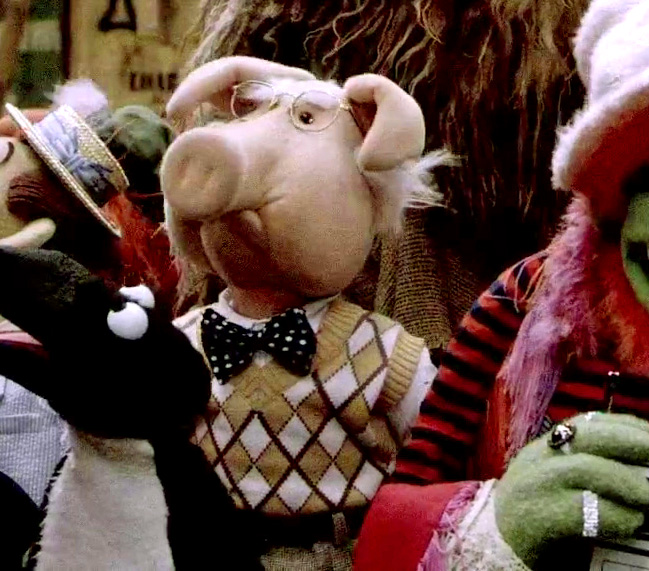 In my musings, I like to imagine him as this consummate professional who’s both studied Shakespork and has a long pre-Muppet Show history in both classical and musical theatre.  Kermit knows he can rely on him when he needs a good porcine actor for character parts in sketches and German and/or Pig-themed musical numbers.  Perhaps the reason he pops up so frequently as a repertory player among the Muppet cast yet always absent from the backstage plots is because he’s the kind of devoted craftsman that shows up at the theater or the studio to do his work and generally avoids getting swept up in “backstage drama”.  Not to say though that he’s a dead serious introverted type…he obviously has a good sense of humor as when we do see him briefly offstage (usually walking to or from the set), he seems to be fond of a good joke. 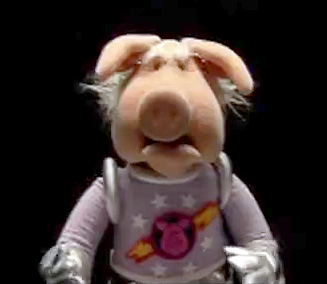 I also like to visualize that despite being the science guru “who knows how all this technical schtuff vorks” when playing The Swinetrek’s scientist, in “real life”, he has trouble setting his clocks or programming his d.v.r.  All his “inventions” and scientific props throughout “Pigs in Space”‘s run were actually usually provided by Muppet Labs and much like film actors playing a doctor or technician, he actually practices handling them in his preparation for each “episode” so he looks more authentic in his role.  It would be fascinating to see what he’s like in rehearsals or in between takes of “Pigs in Space” as he’s playing alongside two other notorious larger-than-life divas with huge egos.  What kind of dynamic does he have working alongside them…is he kind of the more level-headed professional that keeps everything on track?  The kind that keeps the other two focused and diffuses tensions with a joke to lighten the mood when either one is about to get temperamental and disrupt the process?

So, if all three cast members got a chance to appear on the talk show/interview circuit, this would be such a fascinating way to finally explore what the “real” Strangepork is like when he’s not singing in a musical number or acting in a part! 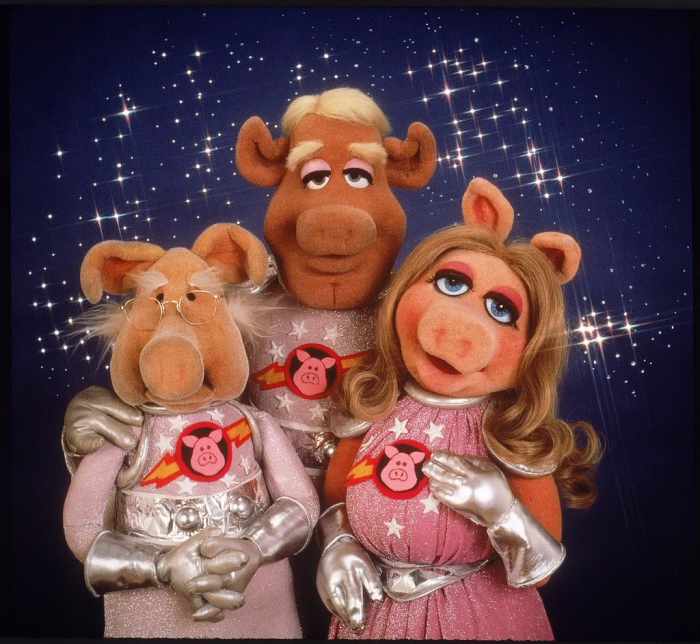 Going one step further, we could delve more into his backstory.  Let’s speculate Julius was the undisputed choice for the role of Dr. Nauga during the auditions for “Return to Beneath the Planet of the Pigs”.  Because of the sketch being a highlight of the pilot, Strangepork was then offered a position on the show’s pig chorus line.  Back then, his real hair color was brown (he had dyed it for the Dr. Nauga role).  In between the first and second seasons, Kermit approached Julius and said, “you know, you’ve continually shined as a singer, dancer, and actor this last year that we’d like to reward you this next season with a regular featured sketch.  (Plus Miss Piggy is threatening to break both my arms if I don’t come up with another starring vehicle for her this year!)  I was thinking of doing something science-fiction themed in the same vein as the Planet of the Pigs sketch two years ago with you playing the same kind of role…but as an added pork…er…ah… perk, all the characters in it will be named after their respective actors!”  Perhaps it was Julius himself that actually suggested Link for the role of the handsome male lead, having worked with him before on other projects, and brought him to the frog’s attention.  (“He’s very much a ‘ham actor’, but in this case that probably works in his favor!”)  Strangepork went back to the white hair dye – which over time he didn’t even need anymore as he grew older!

In between the time I started putting this article together and finishing the final draft, an online interview with all three did indeed show up on Oh My Disney which is along the lines of just the kind of thing I was wishing to see.   Hopefully, this print article is not a one-off and just the beginning of interviews and publicity involving Link and Strangepork alongside Miss Piggy, and some various television/online video promotion is forthcoming. It’s time to Meet this Muppet… 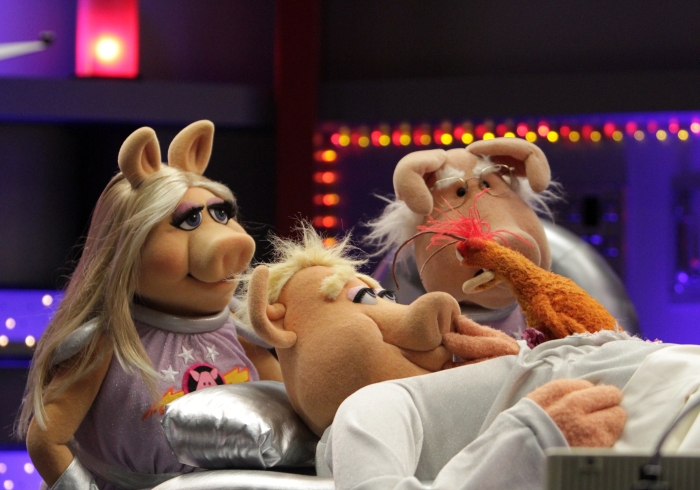 2 thoughts on “Strange Love for Strangepork”