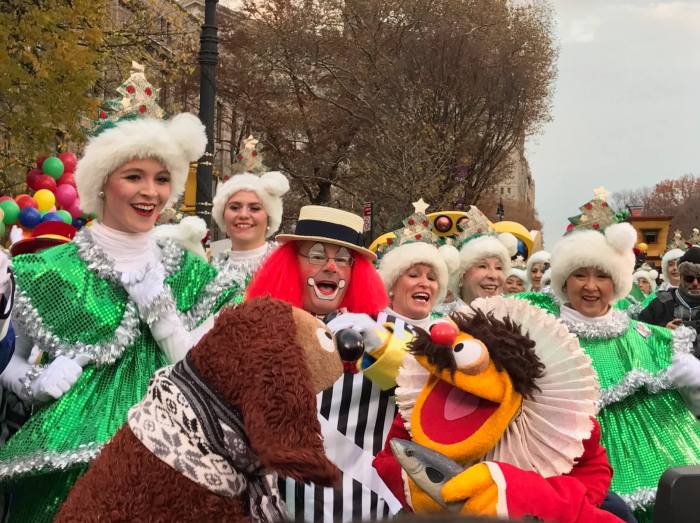 Jarrod Fairclough – Sure, we’re a few days late, but it’s never too late to watch The Muppets and parades!

Thursday marked the most thankful day of the year, Thanksgiving!  And as per usual, Macy’s held their annual Thanksgiving Day Parade, with balloons, floats, music and Santy Clause!

The parade was filled with Muppets this year, as Kermit and the gang kicked off the parade with an updated rendition of their Great Muppet Caper opener, ‘Hey, A Movie!’.
Later on Sesame Street made their annual appearance, singing ‘Try A Little Kindness’ from the new Christmas special Once Upon A Sesame Street Christmas (and you can read our review of that tomorrow!)
Then Miss Piggy appeared with old Muppet pal Tony Bennett to sing ‘Santa Clause Is Coming To Town’.  The internet went a little crazy here when Tony fell and it looked like Piggy (Eric) caught him.  If you watch the video, it’s kind of obvious that Piggy was already beginning to hug him, and the timing was just right.

You can watch the full parade video below, and here’s the time stamps for you all because you’re what we’re thankful for:

00:00 – The Muppets sing an updated ‘Hey! A Movie!’, Miss Piggy appears with two of the shows hosts, and The Electric Mayhem sing ‘Twist and Shout’.
45:09 – The cast of Sesame Street sing ‘Try A Little Kindness’ with Hamilton star Chris Jackson.
2:00:50 – Miss Piggy sings ‘Santa Clause Is Coming To Town’ with Tony Bennett.

(Thanks to ToughPigs for the time stamps)

One thought on “Hey, A Parade! The Muppets Open Macy’s!”