Truly a key factor to the eternal sticking power of the Muppets is that their immense cast provides a character for everyone watching to connect with. Daredevils, check. Divas, check. Extraterrestrials who reproduce through combustion, check. That gang’s all here. But what good is any gang at all if there isn’t a Muppet fan or two among them? Luckily, the Muppets don’t need to worry about this problem, as there have been Muppet fan Muppets since at least 1978.

Before we begin, let’s give a shout-out to Muppet fan characters who are humans, including but not limited to: Dudley Moore as himself in the “Miss Piggy’s Hollywood” section of The Jim Henson Hour, who cheers up the disheartened Miss Piggy by showing her his vast collection of Piggy paraphernalia; Gilbert Gottfried as himself in Muppets Tonight, whose creepy Kermit obsession culminates in him trapping the frog in cement; and Tina Fey’s gulag guard Nadya in Muppets Most Wanted, who falls in love with Kermit in her custody and gets a little too excited when alone with her Kermit collection. Interesting specimens, all, but they are no Muppets. We bring to you now, Muppet fans among the Muppets! 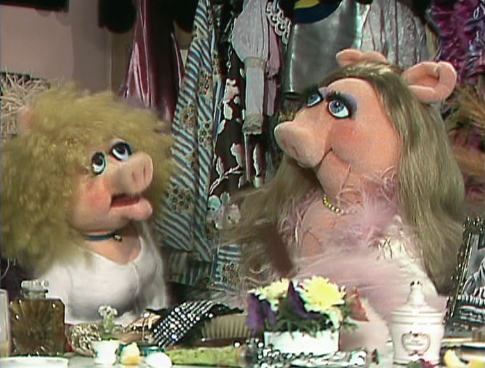 Annie Sue Pig—The Muppet Show (1978)
Annie Sue is a singing female pig, which is enough to generate deep resentment from The Muppet Show’s other singing female pig. But due to her love of the elder sow, Annie Sue is completely oblivious to this. When Kermit grants her a one-on-one audience with Miss Piggy, Annie Sue is giddy about being within touching distance of her idol, tells her that she’s adored her since infancy, and proceeds to rub her face all over Miss Piggy’s costume rack before being shooed out. It’s clear that Piggy’s inspiration stuck with her, though, as Annie Sue leads a handful of show-stopping musical numbers herself over the course of her tenure on The Muppet Show.

Maureen the Mink—A Muppet Family Christmas (1987)
Miss Piggy is initially not fond of her furry little lookalike gifted to her by Kermit in A Muppet Family Christmas. Her disappointment soon fades, however, when Maureen tells of how she worships Piggy so and has seen all of her projects. Maureen gives an adorable giggle of glee when Piggy hugs her.

Vicki—The Jim Henson Hour (1989)
Like Annie Sue, Vicki has loved the Muppets since childhood. Also like Annie Sue, Vicki’s sharing of this fact makes other Muppets, in this case Kermit, feel uncomfortable about their own age. “I just love watching creative people work!” she gushes, before describing how she watched The Muppet Show in day care, to Kermit’s growing exasperation.

Flash’s Groupies—The Jim Henson Hour (1989)
Solid Foam’s saxophonist Flash is attacked by his fan club in the “Videotape” episode of The Jim Henson Hour, despite his efforts to sneak in through the back to avoid them. The girls invade the studio nonetheless, squealing and swooning and tackling Flash, and generally just going nuts. They ultimately abandon him in favor of Bean Bunny, but stay to watch Solid Foam’s new music video.

The Kermit the Frog Club—Muppets Tonight (1996)
The Frogketeers show their Kermit appreciation through song in the fifth episode of Muppets Tonight. Notable members include sole human Cindy Crawford, and Stu, an eager Frogketeer whose short-term memory loss causes him to repeat his name over and over again in the roll-call.

Walter—The Muppets (2011)
Happening upon an episode of The Muppet Show changes Walter’s life forever. His resultant journey as the Muppets’ self-proclaimed biggest fan takes him to the Muppets’ studio, where he uncovers a plot to destroy it. When he inspires Kermit to rally the dispersed Muppets together again to save the studio, his wildest dreams come true and he is invited to become a Muppet himself. Walter’s devotion to the Muppets is enough to make him attempt to hurdle an electric fence, faint dead away at the sight of Kermit the Frog, recognize a Kermit imposter, and go to Siberia to rescue the real Kermit. Perhaps all that excitement has convinced him to move back to Smalltown to admire the Muppets from a safer distance.

Alynda—The Muppets (2016)
Another piglet who finds inspiration in Miss Piggy makes her way on the scene in the The Muppets episode “A Tail of Two Piggies.” Little Alynda is ashamed of her pig tail until she sees her hero Miss Piggy exposing hers, and when she tells Piggy this, they both become resolved to take pride in their bodies from now on. Alynda sits in on Piggy’s tail-positive show and bounces with joy the entire time.

We all become Muppet fans for different reasons, whether it’s for self-acceptance like Alynda and Walter, career aspirations like Vicki and Annie Sue, or simply just because of the joy they provide us. These audience surrogates of ours through the years have done us proud. Keep on living the dream, Muppet fan Muppets!

One thought on “Fan or Muppet? (A Muppet of a Fan or A Very Fanly Muppet)”