Jarrod Fairclough – Monday marked 61 years since the first Muppet graced television, as Jim Henson and soon-to-be-wife Jane aired the first episode of Sam and Friends.  This date is widely regarded as the birthday of Kermit the Frog, who was one of the stars of the small show, and several people online were surprised that Kermit had been around this long. This got me thinking about the age of some other characters, so I thought I’d list just a few Muppets (or at least their concepts) who are older than you may realize. 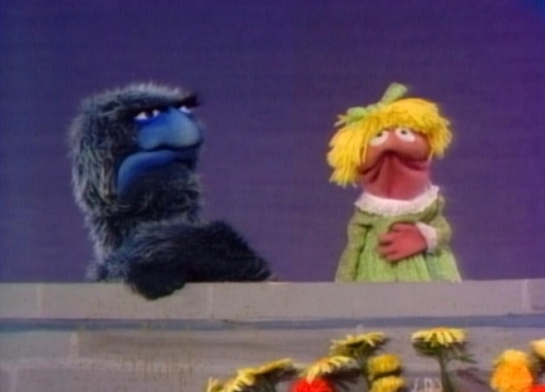 Beautiful Day Monster
Beautiful Day Monster is one of those characters who’s always just sort of ‘been around’. He’s only had a small handful of starring roles, he’s never had a consistent performer, and besides saying ‘Someone’ in ‘Life’s a Happy Song’ in the 2011 Muppet film, he hasn’t uttered a word in years.  Many people don’t realize that Beautiful Day Monster is one of the rare few characters who have appeared in Jim Henson’s two biggest franchises, as he was one of the many monsters seen in the early episodes of Sesame Street.  He in fact got his start even before then with an appearance on The Ed Sullivan Show in 1969, where he got his name after ruining a young girls beautiful day.
Age: 47

Cookie Monster
Friend of the site Cookie Monster has had a resurgence in the last 10 or so years, becoming possibly the show’s second biggest breakout star behind Elmo, 35 years after Sesame Street began.  Though he didn’t become the cookie lover we know until Season 2, he did make sporadic appearances through the first season, usually as a foil to Kermit.  However, Cookie Monster, or at least the puppet and concept, was first conceived three years before Sesame began, as a monster who ate wheels.  The ‘Wheel-Stealer’ as he was known went on to appear in commercials devouring machines and later different foods.
Age: 50

Miss Piggy
Though I’m sure she’d hate to have her real age mentioned, Miss Piggy began making appearances a couple of years before The Muppet Show began production.  Originally known as Piggy Lee, her debut was in 1974 on The Tonight Show, lip syncing to ‘Old Black Magic’, and later on Herb Alpert and the Tijuana Brass, both times alongside her obnoxious agent. She was always the talented pig, but in her early days was much shyer than she would become two years later in the first season of The Muppet Show.
Age: 42 (but doesn’t look a day over 25, right?  Right?!)