Jarrod Fairclough – Team Love.  Team Friendship.  Since Kermit and Miss Piggy split in August last year its a real battle that’s been fought between divided Muppet fans.  And on Tuesday night the whole thing finally came to a head, as Kermit and Piggy debated the issues in their heads.

When we left our review yesterday, Kermit and Miss Piggy had finally admitted their love for each other, as Piggy was wheeled in to surgery after breaking her ankle.  This was witnessed by the whole gang via satellite, and in ‘Because… Love’, they get together to decide if Kermit and Miss Piggy’s reunion is in fact a great idea, or if they should just remain friends.  Kermit can’t decide if it’s a good idea, and so he flips a coin and decides to admit his feelings.  But Miss Piggy is concerned that the flaws in their relationship is too much, as Uncle Deadly tells her to be careful.  Unfortunately Kermit’s indecisiveness is revealed to Piggy by Fozzie and Pepe, and in a devastated impulse, she decides to head to Thailand.  Kermit joins her on the plane and admits his love for her, but just as she’s about to tell him her final decision, she passes out from a mixture of ambien and two chardonnays, meaning the series sends on a cliffhanger, even though we’re not sure the show is getting a second season.

It’s a brave choice by Kristin Newman and the writers, I’ll admit.  It was unexpected, and frankly a little unsatisfying.  You know as well as I do that Kermit and Miss Piggy are going to end up together, so the drawing out of this story line is a bit frustrating, especially when we can’t be sure the series is going to get its resolution.  Personally, I’m feeling pretty confident that the show will return, even if it’s a short season of 16 episodes again.  Kristin Newman has done a fantastic job with these guys, and Emily Wilson and Scott Weigner (The voice of Disney’s Aladdin!) have written a funny script, that suffers only in that it doesn’t end.  Of course I can understand why they’ve gone this way, I just think the risk substantually outweighs the benefits, especially considering the unsatisfying ending to the first season.  I’m hoping that if/when the show returns they’re able to wrap up that final scene in a way that’s true to the show and that works (I felt the same about the Jeff/Annie kiss at the end of Community‘s first season, but I adored the first episode of season 2 that wrapped it up).

The episode saw the return (many silent) of a number of old school Muppet characters, including Droop (who dates back to the Muppet Show pilots), Old Tom (from Muppet Treasure Island), Link Hogthrob, the green Frackle known as J.G, and the scene stealing Howard Tubman from Muppets Tonight.  It was such a nice surprise that in a prime time network series, Droop got a funny line, and Howard Tubman got multiple scenes!  You can tell that Bill Barretta is having a great time playing the campy Tubman, and he’s a character I never realized I wanted to see more of.  If the show comes back, can they please make him a recurring presence?  Because he has the potential to become a break out character, similar to Chip.

And so we come to the end of Season 1, after close to a year of waiting and hoping for something great.  The series we got definitely had its flaws, especially in the beginning, but ultimately it was a great 16 episodes with laugh out loud moments in every episode, and a hell of a lot of heart. Writing these reviews has been my favorite thing I’ve done on The Muppet Mindset since taking over 11 months ago, and they’ve improved my writing substantially.  It’s been so much fun talking with people about the show on Facebook and Twitter, and I’ve got my fingers crossed that we’ll get a second season.  As I said earlier, I’m pretty confident that we’ll get our second season, and as always we’ll bring you all the news we can as soon as possible!  Keep those tweets going to ABC, and read this post to find out what else you can do to help the show continue!

Before we get in to ‘Other Thoughts’, I thought I’d write out the pros and cons that The Muppets had for Team Love and Team Friendship…

I have no idea what Candy Corn and Sweetums’ cousin not getting accepted in to college has to do with Kermit and Piggy’s relationship, but the Sweetums one was so important that it also made Bunsen’s wall of science. 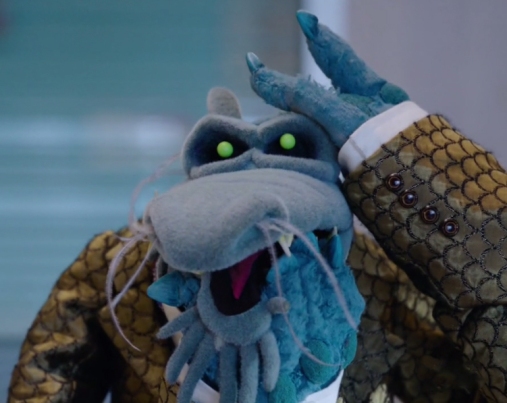