Jarrod Fairclough – I’ve spoken a lot about this ‘retool’ that The Muppets has undergone in the second part of its first season, so it would be pointless for me to harp on about the specifics again.  However, there is one particular change that I was excited to hear about, and that this episode tackled head on – ‘Miss Piggy will stop being so unlikable’. In the past 15 years, Miss Piggy fluctuated from a vulnerable but fierce diva to an all round horrible person, which lead to a lot of negative responses both casual and hardcore fans. The first half of this series didn’t quite know which Piggy to use, and the indecisive thought process showed.  Some episodes had her being awful to everyone around her, while other episodes tried, and in some cases, failed to redeem her.

In ‘Got Silk?’, Miss Piggy is starting to realize that perhaps her behavior over the past few years has made her seem a little unlikable, so she joins Janice in an aerial skills class in order to meet new people and make new friends.  And yet it doesn’t seem to work, as she comes across a little strong to a recently dumped dental hygienist, Gwynne, immediately calling her ‘bestie’ and making plans to fly first class to Ibiza for 2 weeks.  She’s saved by a well intentioned (but a little over the top) Uncle Deadly (with Gloria Estefan in a baby bjorn).  She starts to see that maybe Uncle Deadly is the best friend she’s ever had, and in a sweet moment between the two, she sings to him, telling him how she feels, how appreciative she is that he takes her the way she is. 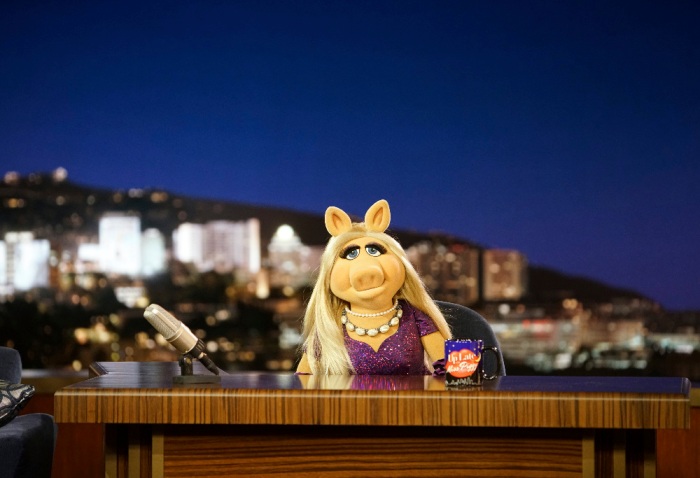 I seem to be saying this a lot about Piggy in my reviews, but it continues to be true – this might be the biggest bit of character development we’ve had from Miss Piggy in years! The whole episode has Miss Piggy being sweet and vulnerable, and she doesn’t get angry once. She isn’t mad that Fozzie and Lew won’t include her in their new segment, she isn’t mad that Gwynne partnered up with Janice in the second part of the class.  She doesn’t karate chop anyone, which is a real breath of fresh air.  Kristin Newman has done exactly what she promised she would do – she’s made Piggy likable again, which hasn’t really been the case in a long, long time.  It’s a shame that its taken until the tail end of the season to do so, but better late than never.  With any luck those big wigs at ABC are watching this and thinking the same things we are, because I really want to see what hi-jinks Miss Piggy and Uncle Deadly get up to (with, of course, the ever awesome Gloria Estefan). 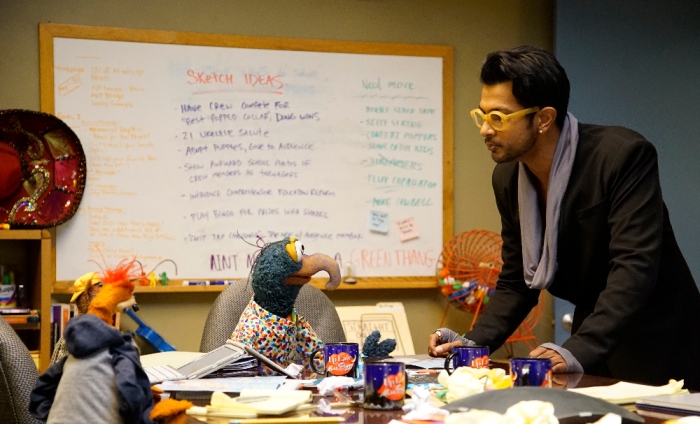 Elsewhere, the writers of the show are feeling a little fed up in their jobs.  Gonzo, Rizzo and Pepe are having the same argument about what lunch to order, when they are invited to lunch by branding guru, the villainous Pache.  He bribes them with nice suits to write a sketch he wants on the air, which is pretty much just an advert for frozen yogurt, and it takes Kermit to talk any sense in to them.  I’ve got to be honest, and I feel like I’m not the only one with this thought – I don’t like Pache.  I mean, of course he’s a villain and I’m not supposed to, I mean that I don’t like him as a character.  Utkarsh Ambudkar does a great job bringing him to live as a smarmy business man, similar to an evil Tom Haverford and Jean-Ralphio from Parks and Recreation.  I just think that, as a character, he wore out his welcome after his introduction in ‘Swine Song’.  A villain in a Muppet movie works because they’re in and out in 90 minutes.  A recurring villain hasn’t really been done before, and I’m not sure it’s suited to this type of show.  If Pache returns in the remaining 3 episodes, so be it, but if the show is renewed for a Season 2, I won’t be upset if he doesn’t come back. 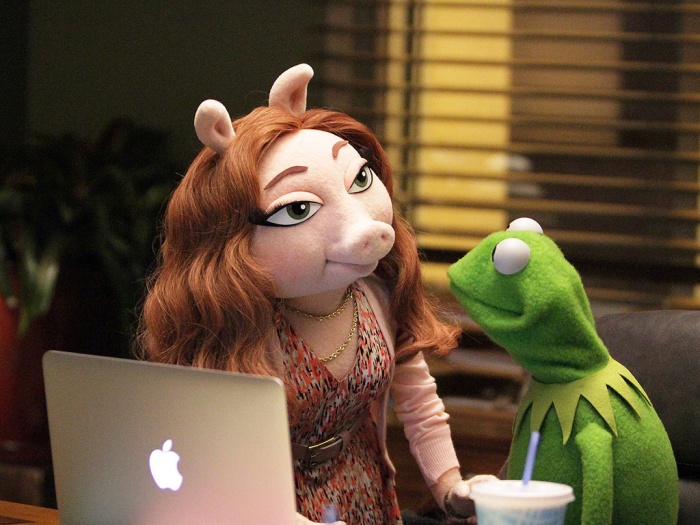 Then there’s Kermit and his relationship with Denise.  This episode does the tough job of pretty much wrapping up that whole saga in a sweet little silent moment, where Kermit returns to his desk to find a box of his things left from his recent ex-girlfriend.  The break up itself happened two weeks ago, and Kermit hasn’t spoken to Denise since, which is never a good sign when you’re ‘taking a break’.  Of course it officially opens the door to the opportunity we’ve known was coming since that infamous press release for the reunion of Kermit and Piggy, and I know next weeks episode heavily features that pairing. Am I sad Denise and Kermit are over?  No.  I would have liked to have seen more of their private lives, but I understand why the writers wouldn’t want to devote a lot of screen time to a relationship we all knew was never going to last.  I assume Denise will be back in some form, after all she still works at the network, and I’d guess that she’s going to use her power to get a little revenge on the frog and pig that broke her heart. 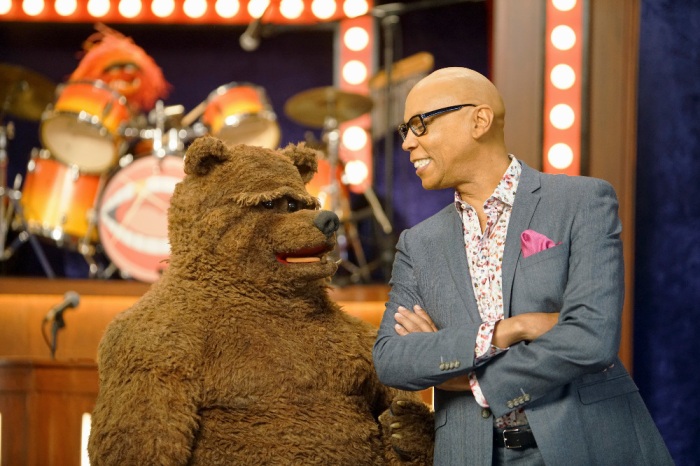 We have 2 guest stars in ‘Got Silk?’;  The wonderful RuPaul and the talented Ingrid Michaelson.  Ingrid doesn’t have a lot to do, besides sing ‘The Way I Am’ with Miss Piggy. She’s got a great voice, and a new fan in me.  RuPaul on the other hand gets the chance to shine, as he sasses Rizzo and judges the Muppet crew fashion.  RuPaul is exactly the sort of guest the show needs to have; one that blows in, does their thing, and gets out. His always infectious enthusiasm is a great fit for these characters, and he has a real affection for them.  His bonding with The Swedish Chef over Kayne was a highlight, but it was still overshadowed by Sweetums working that plastic bag. 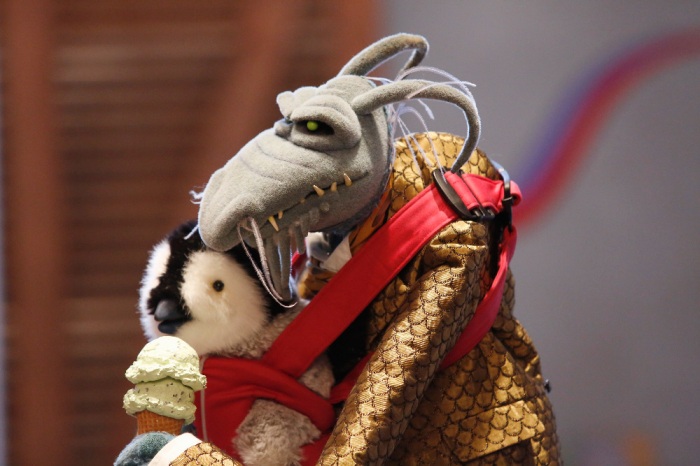 Speaking of Sweetums, he’s performed these days by Matt Vogel, who is also playing Uncle Deadly (that was a long way to go for that segue but I think I nailed it).  I am over the top thrilled that in a new Muppet series, one of the biggest and brightest stars is Uncle Deadly. What started off as a one-episode joke character became a semi-regular occurring one on The Muppet Show, and then he disappeared without a trace for decades. It wasn’t until the 2011 film The Muppets that he returned and became the star he is today.  Vogel is doing such an amazing job with Deadly, and instead of relying solely on creepy flamboyance, he can play him with a deep sense of longing and love.  Jerry Nelson would no doubt be proud of the beautiful work that Matt Vogel, and the writers, are doing with the character. 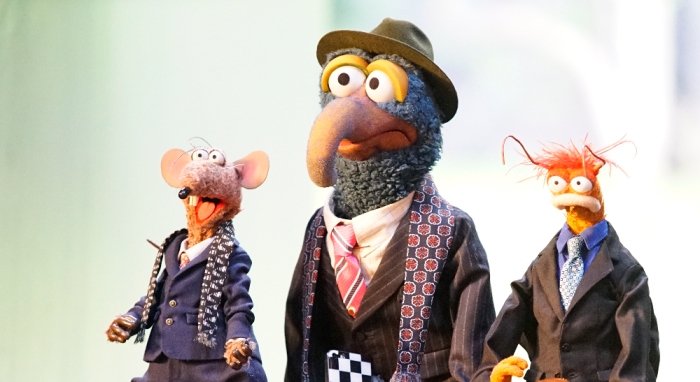