Jarrod Fairclough – In the updated version of the new Muppet series, Showrunner Kristin Newman has revealed that guest stars will be used in more cameo-like ways, rather than with main roles in the episodes plots.  Still, in 10 episodes there’s been some great guest star moments, and we thought we’d choose 10 of our favorites. 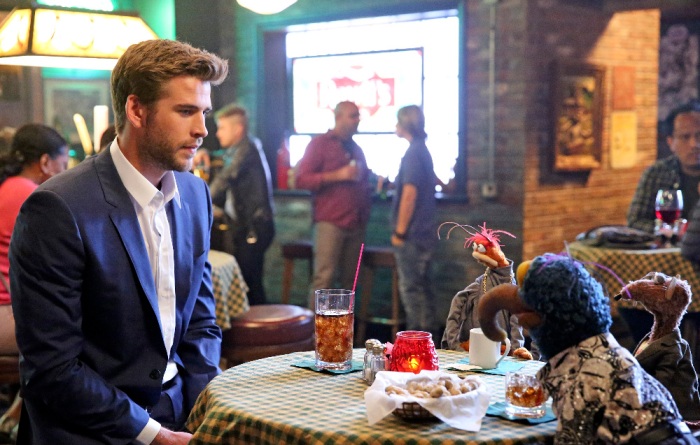 10 – Liam Hemsworth discusses love with Gonzo, Pepe and Rizzo (Episode 3)
Though I wasn’t thrilled that Gonzo was ashamed of his looks, a fairly mediocre storyline was saved by a surprisingly funny Liam Hemsworth, who discusses love with the three writers of ‘Up Late’.  He reveals that although he’s been gorgeous since birth, he has struck out a a few times – just at a super high level.  He also calls Gonzo a ‘cute little elephant beaver’, a description that’s oddly fitting.

9 – Christina Applegate faceplants a cake (Episode 3)
After she humiliates Miss Piggy with a video of the porcine princess falling face first in to a cake, Miss Piggy forces Scooter to join her in a plot for revenge.  As Piggy films from a car, Scooter reluctantly offers up the cake, and Christina does so because she doesn’t want Scooter to be fired.  Of course, Miss Piggy ends up arrested.

8 – Kristin Chenoweth causes The Electric Mayhem to fight (Episode 6)
Having not seen a lot of Kristin Chenoweth, I wasn’t sure what to expect when she was announced as the guest for this episode.  I gathered she did a lot of that ‘adorable’ shtick, and I wasn’t sure how it would work with The Electric Mayhem.  The scene in the van did away with any concerns, as her cute innocence causes an argument about Janice’s relationship with Floyd, and the revelation that Dr Teeth and Janice were once an item. A personal favorite part is Chenoweth tossing as many mints she can in to the mouth of a heavily breathing Animal.

7 – Ed Helms and The Muppets do karaoke (Episode 4)
One of the best parts of this whole series was the sequence where The Muppets and Ed Helms sing karaoke in Rowlf’s Tavern.  It was great to see how in to it Ed Helms got, as he sang ‘Don’t Stop Believing’ with Bobo and Sweetums, as he flirted with Janice, and as he asked whether or not Miss Piggy and Scooter has considered whether or not they should keep believing.

6 – Nick Offerman and Janice (Episode 3)
Nick Offerman’s relationship with Megan Mullally is truly the definition of #RelationshipGoals, but that didn’t stop him having a whirlwind fling with bass player Janice.  Though they’re never seen in each others arms, Nick tells Kermit he wants to call his new boat ‘Janice’, with a very intense and seductive look shot at her.  She waves in a flirty way, and he beckons her over.  You can imagine the rest yourself, please and thank you. 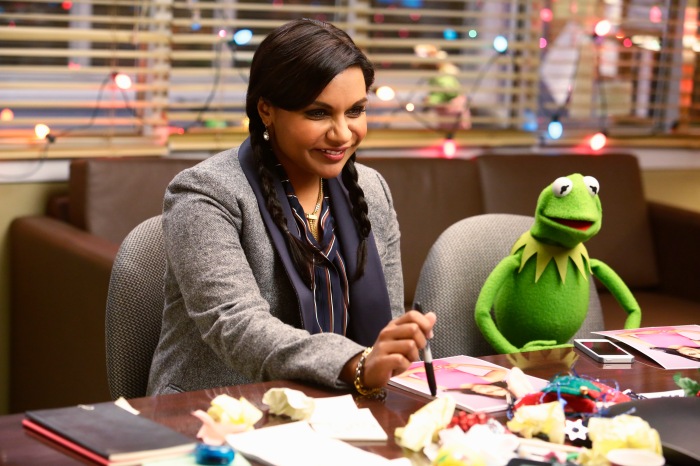 4 – Mindy Kaling’s ‘We’re obsessed with you’ at Target (Episode 10)
Mindy Kaling is one of the most beloved comedians on television, and this little segment shows us why.  When Kermit asks what Mindy hears when she’s shopping, she reveals that it’s usually people shouting praises at her.  In fact, over the speakers, she’s heard Target employees tell her that she’s their hero and their best friend.  She got that at Target twice.

3 – Elizabeth Banks and Scooter go for a tour (Episode 1)
A highlight of the first episode of the series was Elizabeth Banks, and especially her scene with Scooter on the golf cart.  When Kermit needs to delay her, he makes his gofer take her on a studio tour, where they get in an altercation.  Elizabeth throws Scooter from the golf cart, but he returns and they battle it out.  It was a hilarious visual gag, and also a feat of puppetry.  It really was the highlight of that first episode.

2 – Joseph Gordon-Levitt plays poker (Episode 9)
After his chaotic appearance on ‘Up Late’, Joseph Gordon-Levitt sticks around to play poker with Kermit, Gonzo, Rizzo, Pepe and Big Mean Carl.  He’s only there for Rizzo to scam, but the tables turn when it’s revealed that Joseph is scamming them.  His persona becomes scarily evil, as he laughs and takes ‘That Muppet money!’.  He’s a great actor, after all he played Bruce Willis in the future playing in the past… Or something like that, I never quite understood the plot. 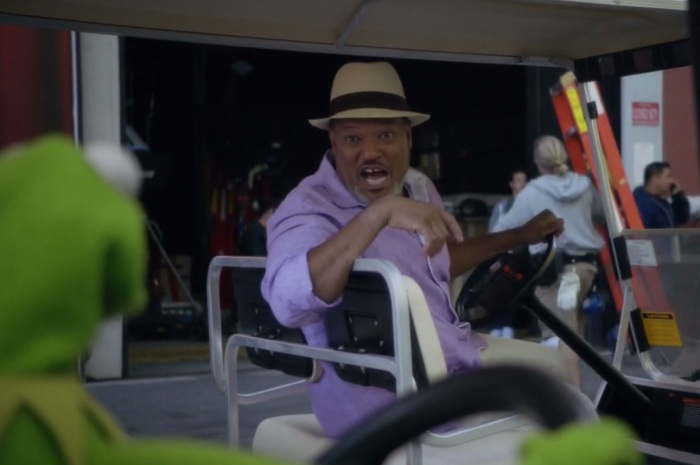 1 – Laurence Fishburne hates the show
The general consensus online by the people who only watched the first two episodes was that Laurence Fishburne was the highlight, and I have to agree.  In the first of the short cameos (it seems these sort of cameos are what Kristin Newman is after), a golf cart driving Fishburne tells Kermit that the artsy ‘Up Late’ sucks, then returns a few moments later to apologize, and says he just had a bad night – because he watched the show, and it sucked!  He then laughs maniacally, driving off and cementing his hilarity.