This past weekend the Center for Puppetry Arts reopened its doors with a brand new Jim Henson exhibition.  Our pal Maria Kersey was at the scene.

Maria Kersey – The Center for Puppetry Arts opened on September 23, 1978, in Atlanta, Georgia. Why does this matter here at the Muppet Mindset? Because on that day, Jim Henson and Kermit the Frog cut the ceremonial ribbon. 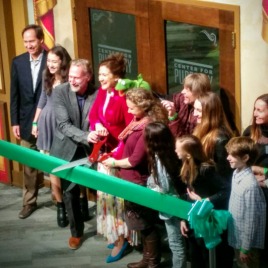 And on November 14, 2015, Brian Henson, Cheryl Henson, Heather Henson, Steve Whitmire, and Kermit the Frog cut the ceremonial ribbon for the grand reopening of the center. The gigantic expansion of the Center gave the artifacts and it’s creator what it deserves. Before, the Center had a few puppets on display, and had little information on Jim himself, but know, I know I definitely felt Jim’s presence in the building that day. This is the largest Jim Henson exhibit in existence, I think Jim would be proud.

When entering the World of Puppetry pavilion, to the left is the Puppets Around the World exhibit, and to the right is the Jim Henson exhibit. As you enter, you enter under the Art of Visual thinking Archway, which seemed to be torn straight from Jim’s red book, with his actual drawings. Next is a gigantic mural of Jim and a mixture of all his creations for Sesame to Muppet Show to Fraggle Rock.

As you turn the corner, you are transported into the early works of Jim, specifically created by Lisa Henson. There is a period television set with Sam and Friends and commercials playing, next to two puppets. Omar, from Sam and Friends, 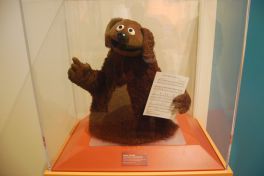 and the original Rowlf the Dog from the Jimmy Dean Show and IBM Meeting Films.

At the next corner, is a remake of Jim’s office, with a remake of his Red book, original blocks painted by Jim, with Muppet flair, and many more amazing things from Jim’s collection. There are many remakes of many iconic muppet things, that die hard fans, such as myself, squealed over, like the Bert and Ernie, Frank Oz and Jim Henson stained glass. There are multiple screens playing many early commercials and behind the scenes of those commercials around there. 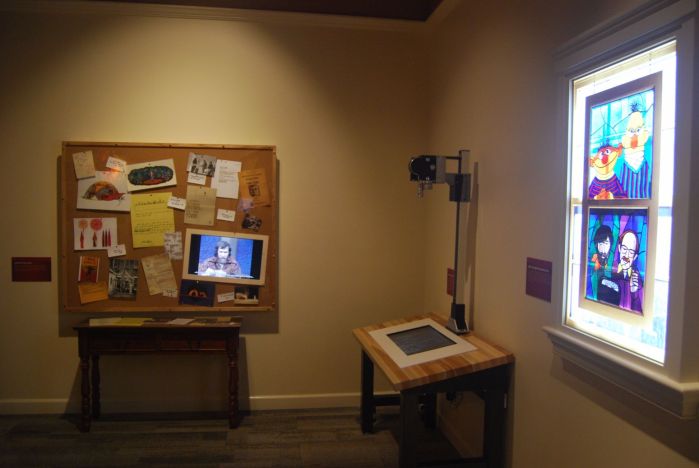 When you turn the corner, you are greeted by the Sopwith Camel puppet from the Muppet Show, and many other iconic puppets from many different projects, like the dog from Storyteller.
The remake of the New York office is spot on, from sewing machines, to boxes with different materials to slinkies with fake mice in them, just like the real ones Jim put in the office. (Psst! Look at the coat on the doorknob! Look familiar?)

Next is Sesame Street, where there are ten puppets, including Big Bird and Ernie and Bert. In the next room, there is a set with a camera and three monitors that are in actual use (though two seconds off) and a non-moving Dolly you can sit on! There are some puppets in that room, but I’m not giving away all the Center’s secrets. 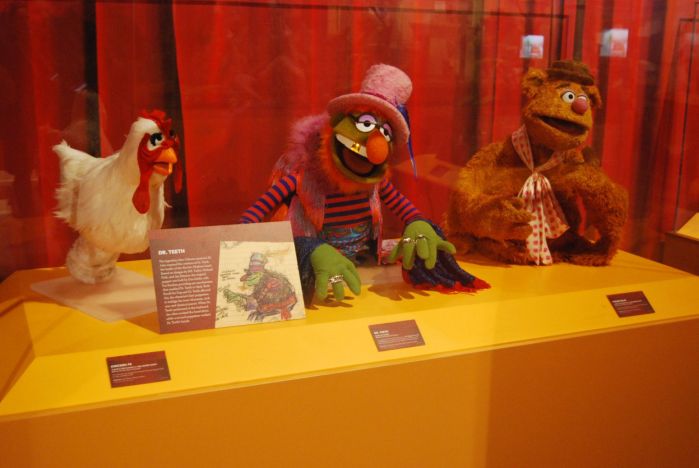 Then, The Muppet Show area, with eighteen puppets, some original, some for photos, but, I’ll just tell you, it’s an absolute treat, and I found out why Camilla hasn’t been on the new show yet… 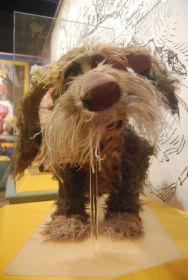 The next room are showing different videos and characters from different projects over the years, from Fraggle Rock, Labyrinth, The Dark Crystal, Jim Henson Hour, and more! You feel like you could be in the movies/shows themselves, the walls are actual drawings, and everything feels so light and amazing, just like Jim would’ve wanted it.

The last two things you see before exiting is a remake of the Kermit the Frog in the swamp with his banjo stained glass from Jim Henson’s New York home, and this fantastic quote from Jim.

I interviewed many die hard fans that were there for the opening, and most said their favorite part was how they felt transported back in time, and how many original puppets were there. I interviewed Kelsey Fritz, exhibition director, about why they decided to renovate and she said:
“We here at the Center, wanted everything to be more inclusive over all, that there was more context given about Mr.Henson and his creations, and to provide more information to its visitors throughout the years, not just for 2015. It’s not just a museum, it’s an inspiration to future puppeteers all over the world.”

I was astonished Steve Whitmire was there in his hometown, since everything with the new show is going on. Like I said before, Brian Henson, Cheryl Henson, Heather Henson were all there, with their spouses and children (so many grandchildren, and they opened the doors themselves, it was adorable!) Bonnie Ereckson, Fran Brill, Leslie Carrara-Rudolph, Rollie Krewson, Stephanie D’Abruzzo (she made me cry because she loved my puppeteering, and she knew that the next generation of puppeteers were going to do amazing things.), Karen Falk, Craig Shemin, Ryan Dillon, and Abby Cadabby were all there! (Fran and Prairie Dawn were there on the seventh, for members only.) The puppets are in great hands in Atlanta, and they get changed out every so often, so it’s a new experience every time! Now there is 75 puppets on display, 500 in total. That’s not a typo! Five hundred Jim Henson creations! Can I live there?

I would like to thank The Center and all they do. I would like to thank Aretta Baumgartner, the educational director, and everything she has done for me at the Center, and for her and her amazing team, to keep spreading joy, and thank you for all the exclusive interviews. If you want to know more about the CPA go to http://www.puppet.org/, they have all the information you need, dates and times for other events, performances, and learning/job oportunities. I would like to thank Eric Pahl for the pictures provided in this article. I want to thank Jarrod for letting me do this article, and I have many stories just from this Saturday only I can share with you, so comment below if you would like to hear them, I’d love to write more!
Dance your cares away, and keep believing!

One thought on “The Center for Puppetry Arts Jim Henson Exhibition! – A Virtual Tour”