Jarrod Fairclough – Last week I talked about the redemption of Miss Piggy in this series, and how she had gone from a crazy egocentric diva to a crazy slightly less egocentric diva.  Since the break up of Kermit and Miss Piggy, it’s been very easy to side with the frog, with many questioning why Kermit had any feelings towards her in the first place. After all, she’s demanding, harsh, and flirts with anyone with no regard for her partner.  But this episode turns that whole idea on its head, as we not only finally get a look at Kermit as the bad guy, but we see a glimpse of just why these two worked in the first place. 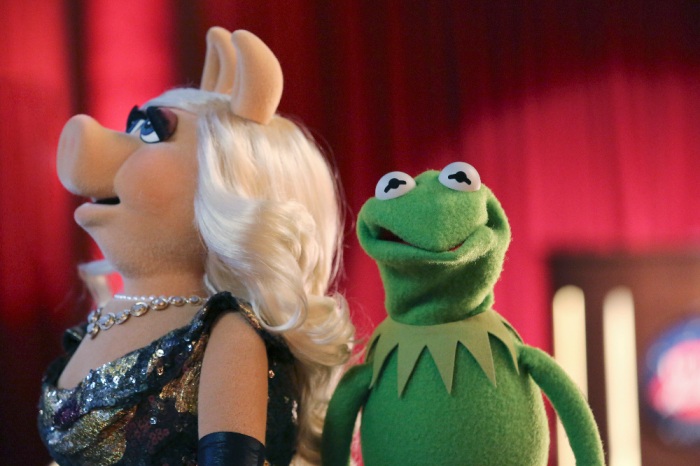 Okay, perhaps I’m overstating it when I claim that Kermit is the bad guy in this situation, because he does everything with the best intentions, as Kermit usually does.  But it doesn’t take a genius to see that asking an ex girlfriend to buy a gift for a current girlfriend is a terrible idea, and one that’s going to make you seem insensitive.  In this situation though, Miss Piggy takes the high road, and helps Kermit on his quest to get Denise the perfect gift.  This episode shows a lot about Miss Piggy, too.  Along the same lines as last week, Miss Piggy continues her redemption, finally being the one to come out on top of the whole situation.  I can’t help but get the feeling in this episode that Miss Piggy actually kind of likes Denise, and hates herself a little for it.  The first clue was in the episodes’ beginnings, as Piggy and guest star Kristen Chenoweth discussed an exiting Denise. Kristen begins her evaluation of her biggest fan by calling her ‘sweet’, to which Piggy gives a half hearted, but still telling, ‘Mmm’.  She refers to Denise as a child, continuing throughout the episode, and while it’s certainly got its roots in malice, its almost pity of innocence, which I think Piggy is a little jealous of.
The biggest clue however came from Miss Piggy actually buying Denise a sweet and thoughtful present.  The easy route to go in this story would be to have Piggy buy something awful, like a rotting fish or a show horn, if anything at all.  The writers however have come up with an almost genius idea of having Miss Piggy get her revenge but not hurt Denise in the process.  Denise has no idea that the lovely jewelry box is playing a song that reminds Kermit of Miss Piggy, to her it’s just a sweet gift.  Of course, it’s highly probable that some of Miss Piggy’s plan involves Kermit finally reconciling with her, and I think we all know that it’ll eventually happen, but it’s nice to see a Piggy who is above hurting someone who’s really pretty innocent in her break up with Kermit.

It’s also good to see just a glimpse of how these two ever worked in the first place.  Miss Piggy knows a lot about how to push Kermit’s buttons, but she also knows just how to calm him down.  She calls that well known Kermit scrunch face his ‘squishy face’, and can get him to stop making it.  We see the respect that these two have for each other as people (figuratively speaking), and the glimmer love that still sits between many people who’ve split up over the years.  I’m a believer in exes being friends, hell I was a groomsmen in my exes wedding to my best friend, and so it’s nice to see that these two can still get along, in some way shape or form.
Some viewers have criticized the episode for not fleshing out Kermit’s relationship with Denise, but I feel like these people are missing the point.  This episode is not about Kermit and Denise, it’s about Kermit and Piggy.  Let’s be honest, we all know Piggy and Kermit will be back together at some point, so why bother spend time getting to know Denise’s character in this series when it inevitably doesn’t really matter, as evident by the fact that we haven’t seen her for so long.

The Electric Mayhem star in the B story this episode, in one of my favorite story lines from the entire series so far.  The band invites Kristen Chenoweth to accompany them to Floyd’s parents’ 40th anniversary party, but get in to an altercation in the process.
I’m not a Kristen Chenoweth fan, only because I haven’t seen a lot of her work over the years, but she plays off these guys perfectly, as she causes, and tries to resolve their issues.  There’s a lot of meat in this story, as we finally see the bands dynamics in a way that we haven’t seen them before.  In Episode 4, Sam the Eagle revealed his true feelings for Janice, leading many people to ask if she and Floyd weren’t a couple as they have been since pretty much their introduction.  Here we’re given the answer, which is – Floyd thinks they are, Janice thinks their just ‘going with the flow’ because she’s spiritual and frankly a little spacey.  The ensuing conversation reveals that, unbeknownst to Floyd, Janice and Dr. Teeth were once in a relationship, leading the band to argue about wages and the true owner of the Electric Mayhem Bus (or van, as it was in this episode).

The band exit the bus, and for the first time ever, we get some Electric Mayhem mayhem! The whole thing boils down to an altercation between Floyd and Dr. Teeth, the former accusing the latter of being self centered.  Teeth is having none of it, because he knows the argument is relatively pointless in the overall scheme of things.  That said, he still threatens to drag Floyd back on the bus by his mustache.  They decide that their problems all stem from one place – Kristen Chenoweth’s presence.  So they dump her in the middle of the desert with nothing but a half eaten packet of funyuns.  From the little I know about Chenoweth, she seems like an extremely radiant and positive person, so I found it amusing that she was almost reluctantly willing to be abandoned.  The press images show the band eventually reaching a destination, it looks to be a old church in the desert, so I’m not sure if anything was filmed here and cut, or if they just thought it’d make a nice photo.

I said it last week, but it bodes saying again – I love how proud Scooter is of his relationship with his mother.  It’s a little Norman Bates, but it’s so darn hilarious that I’m willing to look past the creepiness.  I feel like they’re making Scooter the ‘Kenneth the Page’ of The Muppets, this week’s fascination with Scooter’s Mom’s friend Ken being very reminiscent of Kenneth’s Mom’s friend Ron.  Scooter’s dorkiness has been dialed up to 11 for this series, and it continues to work in strange but amusing ways.
I’m hoping we finally get to see Scooter’s Mom, and it may even give us a little glimpse of what Skeeter has been up to.  #FansForSkeeter!

In each review I’ve done, I’ve mentioned the stellar work that Eric Jacobson has been doing.  While that’s no different in this episode, I thought I’d take the chance to say a little something about the other Muppet performers.  Steve Whitmire’s Kermit is something that a lot of people are really seeing properly for the first time in this new show, and I think he’s doing amazing work with the frog.  He plays Kermit with such a range of emotion every week that he can rival even the best actors.  I’m not sure how the Emmy people are going to look at this show, but I’m really pulling for he and Eric to get nominations next year.
David Rudman continues to do great work with Richard Hunt’s characters.  We’ve discussed Scooter, but David’s Janice tonight felt really true to Richard Hunt in this episode, that for a moment I forgot that it wasn’t him.
Bill Barretta is hilarious and amazing as always, and his Dr Teeth tonight went from friendly to menacing very well.  Plus, Pepe is second nature to him now, that I feel like half the time Bill’s just improvising the Prawn’s lines.
Dave Goelz doesn’t have a tonne to do tonight, but almost all of his lines are killers. Zoot’s spaced out behavior is in its prime, as he berates poor Kristen Chenoweth for no reason at all.  Gonzo suggests getting Denise a scale so she’ll know if she’s fat, and I’m continuously falling in love with Chip and how strange he is, even if his eyes do give me nightmares.
Matt Vogel’s Floyd is so close to Jerry Nelson’s that I’m willing to call it one of the best recasts we’ve ever seen.  He’s got the attitude and inflections perfect, and it’s heartwarming to see the strange walk that Jerry gave Floyd live on.  Also, Vogel is doing an extremely good job with Uncle Deadly, tonight really turning up the creepy flamboyance that we’ve seen over the past 6 weeks.  I’m glad they haven’t gone the campy route with Deadly, but instead have kept him being dark and strange, almost an enigma.  He’s one character who I hope we see the home of, only because I’m convinced he has a skeleton dressed up as Liberace in it.
Still no sign of a Peter Linz character.  I miss Walter.

I feel like this episode had the best flow to it than any of the previous 5, which shows that the writers are really becoming comfortable in their roles.  I cannot commend these guys enough as they take on these iconic characters, as I’m sure it isn’t an easy task bringing them all in to such a 21st century setting.  I can’t wait to see what else they have in store.