Happy Halloween from The Muppet Mindset.  Be sure to go back and look through all the SPOOOOOKY posts from the past week!  LOOK OUT, THERE’S A MURDEROUS SNUFFLEUPAGUS BEHIND YOU!

Jarrod Fairclough – In 1999 my brother and I were ecstatic to receive a joint Christmas present – a Sony PlayStation.  While my other friends had Nintendo 64’s etc, this was the first real gaming system we ever had, besides that shocking Atari.

I spent hours on that thing, and to this day I can still kick anyone’s butt at Crash Team Racing.  I played a lot of the racing games as well.  But I never got in to the adventure style games.  Then, for Christmas the next year, I opened up a game featuring some characters I’d recently been getting pretty in to.  The Muppets.  It was a bold decision by the folks, I mean I’d only just started learning about these guys in any great detail, and who’d know if I’d ever end up staying interested in them?  We may never know…

The game was Muppet Monster Adventure – a spooky Halloween/Monster adventure where the player controls Robin as he dashes through different worlds inhabited with scary monsters.  Around a month ago, I thought it would be fun to play again for the first time in 14 years.  Thankfully, the PlayStation still worked, and I began.

I know it was the early days of video games, but I can’t help but laugh when I see now how bad the graphics are.  It’s horrendous.
The game begins with a short video, which you can find below.  The Muppets are on a plane, and Robin is thrilled to be heading on a vacation.  Unfortunately for him, his holiday is to a creepy run down old castle in the middle of nowhere, as Kermit and the gang accompany Bunsen to the reading of his late uncle’s will.  Can I just say here how much I miss not only Robin, but Jerry Nelson?  Matt Vogel is CRUSHING IT with these characters, but it’s so nice to hear Jerry again.

In typical Muppet/Halloween fashion, there’s a setback when Kermit, Miss Piggy, Gonzo, Fozzie and Clifford are turned in to villainous, monstrous versions of themselves.  Kermit becomes the Ker-monster (get it?), Piggy becomes the Ghoulfriend, Fozzie becomes Wocka Wocka Werebear, Gonzo is Noseferatu and Clifford becomes Muck Monster. Thankfully Robin, Bunsen, Beaker and Pepe have survived unharmed, and it’s up to Robin to save them all, with a little help from the other three. 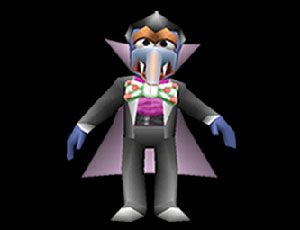 And so we begin gameplay.  It’s so bizarre that a Muppet game would center around Robin, but I think it’s a great choice, and it totally works.  One of the games top features is it’s amazing soundtrack.  Composed by the future Oscar award winning Michael Giacchino, the stand out is Robin’s ‘I Will Survive’, which you may have noticed was mentioned in yesterdays Top 10 Songs of Halloween list!  The vast majority of Muppet fans haven’t heard it, so I encourage you to go and take a listen.  It’s like brand new Jerry Nelson material!

Gameplay is pretty stock standard, with the ability to take on the villains powers for small bursts in order to further yourself.  You can fly like Gonzo, swim like Clifford, or climb like Fozzie.  The whole thing is relatively easy, which is good because I don’t have the patience to play hard video games.  Although I did try to outrun a peacock three times and lost, so that was annoying.  There were things about this game I didn’t remember, like the appearance of Rizzo occassionally, or Beaker sometimes flying around the place. 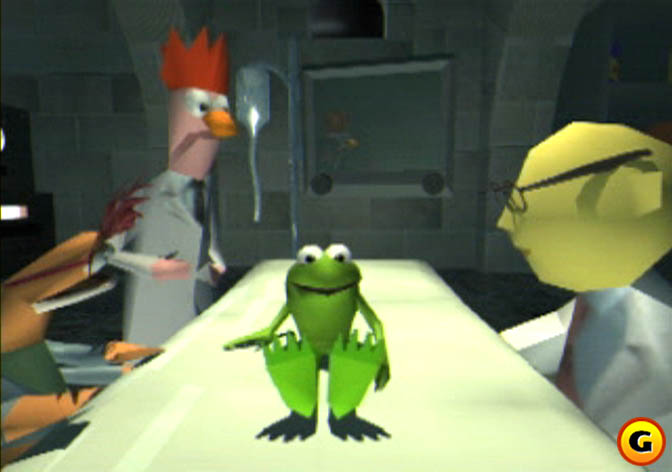 The voice acting is on point, with this being some of the last work Frank Oz did with these characters.  By this time Steve Whitmire was really coming in to his own with Kermit and Beaker.  Bill Barretta’s performance as Pepe is one that haunts me though.  As you progress through the game, Pepe appears to help you out.  If you come even close to a Pepe flag, he will shout ‘Hola!’ at you.  The 89th time this happens, you may find yourself shouting at the TV to be quiet.  That said, in the above video, Pepe urges Robin on saying ‘You are a tough frog, okay.  You’re a brave frog, okay.  Get the monsters!  Get the monsters! Go go go go go!’ – I still say that, at least the end part, to this day.

The game’s a lot of fun, and I’d love to see a re-release with some better graphics, or at least a release of the amazing music.  If you’re so inclined, you can watch a full set of play through videos by clicking here.

2 thoughts on “Muppet Monster Adventure – A Look Back”