It’s Halloween Week on The Muppet Mindset!  Celebrate with our spoooooooky posts! LOOK OUT!  THERE’S A CREEPY CLOWN BEHIND YOU!

As one of my favorite Halloween songs states “Life’s no fun without a good scare” and throughout his career Jim Henson definitely created a few good scares for us. The Muppets are known for revelling in the weird and wonderful so it should come as no surprise really that a group of characters famed for its monsters has such a wealth of scary (and not so scary) Halloween-esque moments to pick from. Just about every form of media that the Muppets have ever released material in has had some kind of eerie incarnation. I’ve plundered the archive and conjured up my top 10 Halloween songs. They are sure to lift your spirits!

So get your pumpkin carved, your candy corn primed and your costume on. Oh, and feel free to hide behind the sofa – things could get strange… 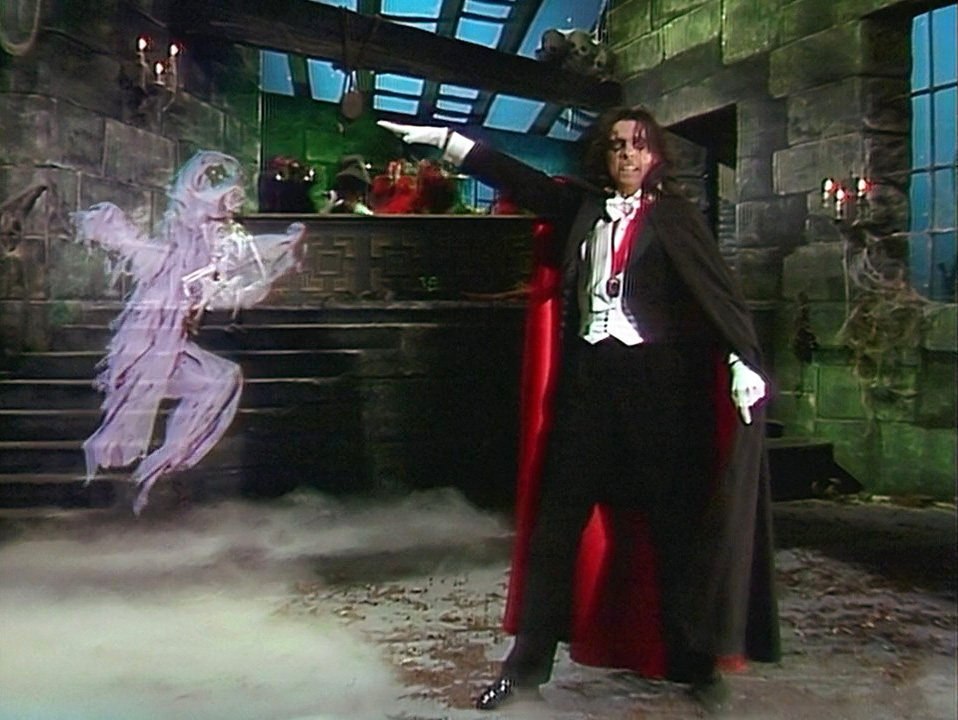 10 – Welcome to my Nightmare – The Muppet Show – Alice Cooper

It’s a bit of serendipitous luck that has drawn this song as the first one on my chart, but “Welcome to my Nightmare” is the perfect way to start a Halloween countdown. It’s a real visual treat to watch. Alice Cooper is always engaging, but the incredible puppetry and the way he interacts with characters that aren’t even there is spectacular. This song is much more about the music than the vocals, but that’s not to say that there’s anything wrong with the way Alice sings, just that the orchestration is so good. This really could be the soundtrack to a nightmare as it has a strange, trippy vibe. Part of me wishes this was performed by The Electric Mayhem as they would love this, but the ghoulish band is a cool replacement. This episode of The Muppet Show was my first experience of Alice Cooper and I bet he scared me as a kid. I definitely remember being confused by a man called Alice!

I was helped by my 12-year-old nephew Connor when I picked the songs for this week’s chart and I have to say this wasn’t a particular favorite of his. I guess Elmo and Abby don’t play well to the tween boy market. Never mind guys, I love you. And I love this song. I really enjoy its modern pop feel and Elmo and Abby give an appropriate pop-esque vocal with the correct inflections and vowel sounds. It’s incredibly catchy. I guarantee you’ll be singing this all week! The fun animation style is a nice touch and gives this video instant appeal to youngsters and makes it stand out from the crowd. Ryan Dillon and Leslie Carrara-Rudolph are awesome and make these characters really engaging and interesting to watch. This would be a great song for a Halloween parade or show. Thank goodness I’m not 12 is all I can say! 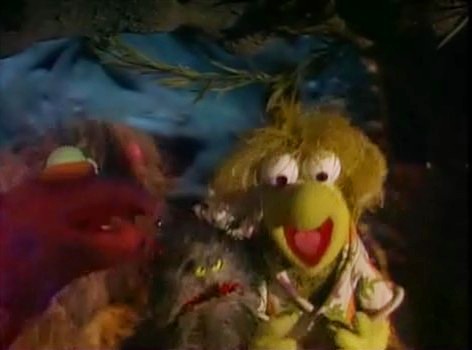 I think this is the first time Philo and Gunge have appeared on one of my charts so I’m pleased I’ve been able to add them to the roster. I must mention Dave Goelz and Richard Hunt here as their work as Marjory’s assistants really makes them two of Fraggle Rock’s unsung heroes. They have such distinctive voices and vocal patterns. This high-energy number has a scary vibe that makes me think of “Everybody (Backstreet’s Back)”. I’m not sure why. I guess it just has that minor chord feel. In my Wembley chart a few weeks ago I featured “Very Scary (If this Don’t Getcha)” which appeared in the Fraggle Rock episode “Scared Silly” along with this song. Both are amongst Wembley’s best in my opinion, but I have to admit that I purposely held this song over until Halloween as it is just perfect for the season.

There are plenty of Count songs that are eligible for this chart, but I really like the creepy nature of this song in particular. This is a lullaby that’s slightly menacing and has an eerie music box feel that is a staple of haunted house movies. Obviously this official version is not quite as dark as it could be, but I’d love to hear another singer or group take this to the next level. I really love the idea of a lullaby that’s restful yet unnerving. This gets extra points for its mention of bats, cats, goblins, spiders and full moons – all of these evoke such great Halloween images. This has a great eastern European feel that all of The Count’s best tracks have. It’s such an engaging music style and I find that even in a song like this it resonates and draws me in. I can’t say enough great things about Jerry Nelson. As far as I’m concerned he’s never been better as Count von Count as he is here. 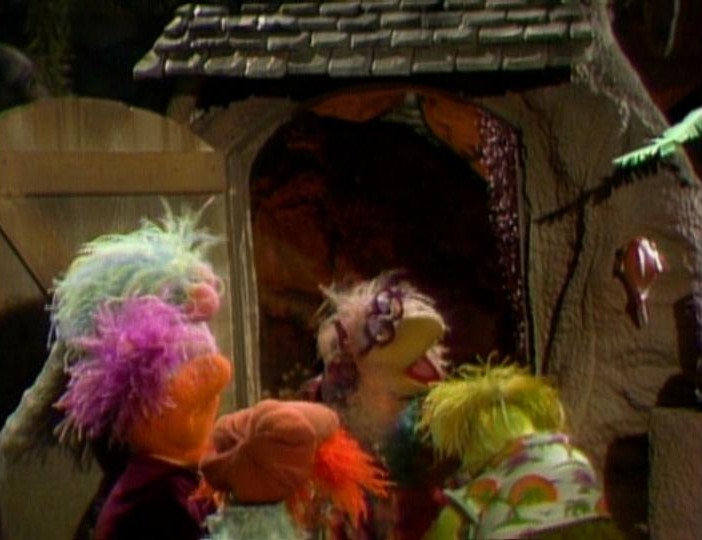 6 – The Ballad of Sir Blunderbrain – Fraggle Rock – The Storyteller Fraggle

As well as being one of my favorite Richard Hunt songs, this was one of Connor’s top picks too. I guess 12-year-olds who hate Elmo can still like Fraggle Rock. I’d also like to give a quick shout out to “Jabberwocky” from “The Muppet Show” at this point which Connor and I both marked highly, but ultimately decided wasn’t really a song. If we hadn’t deemed it ineligible it would actually have been fifth on this list. To link the whole thing back to this song – “Jabberwocky” features Richard Hunt prominently so we’ve now gone full circle. This story continues the Halloween tradition of ghost stories around the campfire and I heartily recommend reading the lyrics of this song as a late night poem for the young ’uns. I’m sure we can all channel our inner Storyteller Fraggle if we try.

This guitar led number has all the sounds of Halloween in one song – we get a creepy harpsichord, ethereal “ooohs”, clanging bells, crashing thunder and the always evil accordion! Noel MacNeal has a fantastic voice and even on this (kind of) scary track his vocal is warm and friendly and just lets the listener know that everything will be alright. Along with “Hello Halloween” from earlier in the chart I think this must be one of the best Halloween songs for little kids. The Bear in The Big Blue House gang have quite a Halloween repertoire that is certainly worth checking out. Songs like “Bat Dance”, “Trick or Treat” and What Are You Gonna Be for Halloween?” really should be on the playlist of every Halloween party this year. 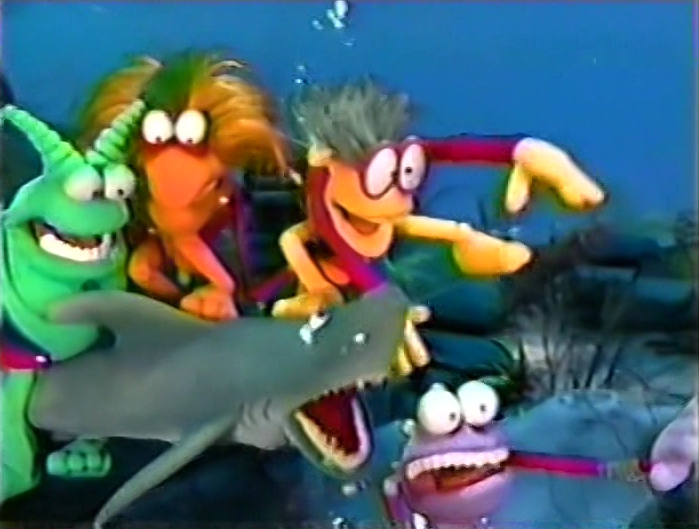 This song isn’t presented in a particularly Halloweeny manner, but it’s hard to deny that at least on one level this song can be interpreted in a horror type way – hence its inclusion here. (Also, Connor loved it!) I must admit that The Extremes are one of my favorite things about the Jim Henson Hour. I wish they’d stuck around longer. They are brilliant singers and really fun puppets to look at – even if they do scream late 80s. Actually I guess they scream most things! (Ba-dum-chow!) The Extremes are performed by Kevin Clash, Steve Whitmire, Jerry Nelson and Sharon Lee Williams. Sharon has an exceptional voice and as well as voicing an Extreme she added her vocal tones to several “Fraggle Rock” characters including Aretha and The Fragglettes. Not as spooky as some of the songs on this chart, but equally as chilling – beware the Maneater on Halloween night. She’ll eat you up! 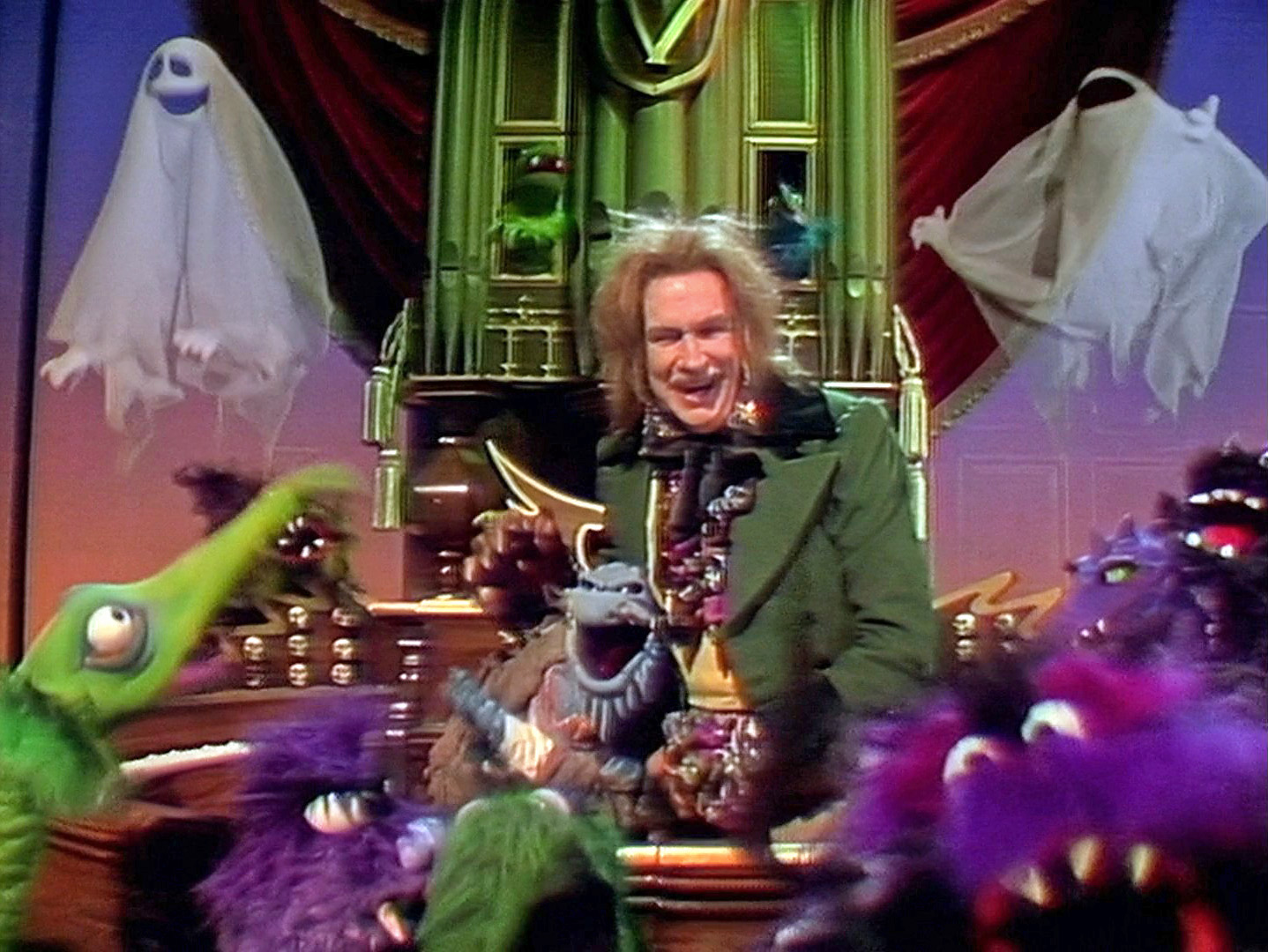 It would be unthinkable to write a Halloween-themed chart without including both Uncle Deadly (The Phantom of the Muppet Show) and Vincent Price.
Surely Vincent Price has the best horror credentials of any actor that’s ever lived. He starred in some iconic horror films including “House of Wax” and “The Fly”; he hosted the horror anthology radio show “The Price of Fear”, recorded dramatic readings of Edgar Allen Poe stories; his voice appeared on Alice Cooper’s “Welcome to My Nightmare” and Michael Jackson’s “Thriller”, and as if that wasn’t enough he recorded the spiel for the “stretching” room at Disneyland Paris’s “Phantom Manor”. And that’s just the highlights! He and Uncle Deadly make a great team here – they are both creepy and foppish and like brothers from another mother. Vincent gives a great dramatic performance, yet he’s clearly having fun and hamming it up. His voice makes my spine tingle! 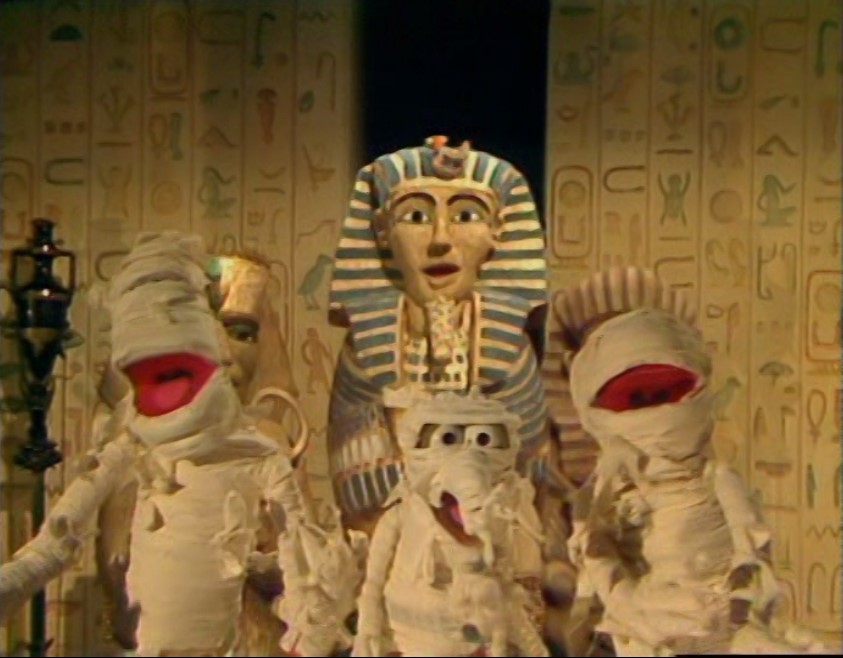 2 – Night and Day – The Muppet Show – Archaeologists, Sarcophagi and Mummies

This horror-themed performance adds a creepy twist to an ordinarily romantic love song. I love it when a song is given a different meaning. I once worked on an eerie version of “My Favorite Things” from “The Sound of Music” and it worked really well. Try it yourself – take a happy song and spin it for Halloween – it’s a lot of fun. These Mummies are much less scary than the infamous Ernie Mummy from “Sesame Street” – I know he’s been the cause of many a nightmare in the past. In contrast, this song as presented here goes from spooky and atmospheric to full on production number. It’s interesting that the more “adult” Muppet Show goes for humor while “Sesame Street” is quite happy not to pull its punches. 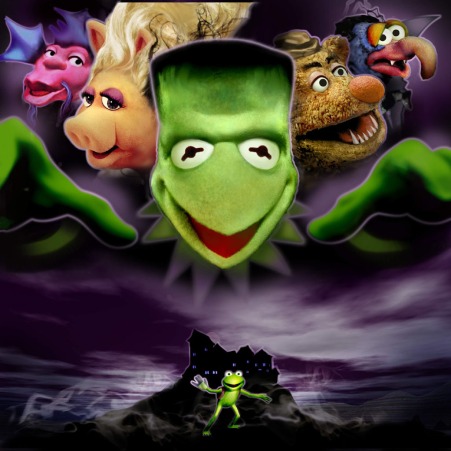 1 – I Will Survive – Muppet Monster Adventure – Robin and Monster Chorus

“At first I was afraid, I was petrified.” Perhaps not. I don’t think in my wildest dreams I ever expected to feature a song from a Muppet video game in my chart, let alone have it at number one, but this for me is the perfect Halloween Muppet song. In fact I think if someone asked me to find them a song that sums up the Muppets in music form this might just be the example I give them. Equally heartfelt and inspirational (a la “Rainbow Connection”) and silly and wacky (a la “Mahna Mahna”) this combines the best of both worlds. It sounds very “Muppet Treasure Island” which only adds to its charms in my book. I never owned a Playstation so was sadly unable to buy this game, but I’d often covet it as it sat on the shelf at “Blockbuster Video” (those were the days). I always wanted to play it. The game is fondly remembered by gamers of the day so I’ll have to take their word for it that I was definitely missing out. This song and the entire score for the game was written by future Oscar-winner Michael Giacchino and if you want to set the scene at a Halloween party this year you could do a lot worse than play the soundtrack from start to finish. You won’t be disappointed.

So as this chart comes to a close I guess it’s time to spirit myself away to another plane. The clock has struck 13 and my “Once a Year Day” is almost over. I hope I’ve left you suitably spooked and in the mood for some horrific Halloween fun. If you want to use this chart as the basis for your frightening festivities feel free and if you want to find a way to thank me for putting this together I’ll happily accept candy corn as payment as we don’t get it here in the UK! There’s been a lot of talk about whether the Muppets are for kids recently and I’d like to think that this chart shows the Muppets can walk the fine line between grown up and childish. It has moments of the macabre and fistfuls of fun, usually both at the same time. I guess that brings me back to my opening thought. Life really is “no fun without a good scare”. Have fun this Halloween!