Jarrod Fairclough – One complaint that has plagued not just the series, but the characters in general, is that The Muppets have become Flanderized versions of themselves.  The term comes from the idea that a character will have a small trait, which will eventually become their defining characteristic, remnant of Ned Flanders’ religious beliefs on The Simpsons.

The biggest victim, it could be argued, is Miss Piggy.  Since the late 1990’s, Piggy has gone from an equally egotistical and vulnerable woman to the diva of all diva’s, a trait that was always a part of her personality, but never really defined who she was.  Sure, she’d demand the stage occasionally, or she’d feud with a female guest star, but it was all a desire to be noticed after a childhood of neglect, according to her original performer Frank Oz.  He played her as a flawed figure, and it’s something that Eric Jacobson has had to take on as well.  But who is to blame for this?  I don’t think for a second that it’s Eric, because he is knocking it out of the park.  Could it be the writers?  Possibly.  But I think they’re beginning to catch on, because this series is the most I have liked Miss Piggy in 15 years.

Back in the pilot, we were treated to footage of the famous Miss Piggy / Kermit break up. In that scene, the audience gets to see Miss Piggy in a way we haven’t in a long time – sad.  Piggy used to cry during arguments with her frog, but over the past 15 years she’s been inclined to karate chop him instead.  It’s something that has frustrated a lot of us hardcore Muppet fans.  But this break up seemed to remember those old days of tears, and brought them back in a surprisingly moving scene.
In the last episode, Miss Piggy finally became a likable character to her colleagues, as she cut loose and sang karaoke with them.  My biggest fear was that this character development would be forgotten, but thankfully it seems like that isn’t the case, as evident by her renting a coffee machine for the crew.  Admittedly, yes, it was to annoy Reese Witherspoon, but it revealed just a glimmer of that friendship that was established last time.  It seems that no longer is Piggy as selfish as she has been over the years, and I’ll take even a minimal amount of selflessness as a win.

This episode, ‘Walk the Swine’, did something I never thought we’d see again – it made Miss Piggy human once more (you know what I mean).  Beginning with the well trodden shtick of a celebrity rivalry with Witherspoon, this one is pointed out by Uncle Deadly as the biggest of all, stemming from Miss Piggy losing the role of June Carter in Walk the Line to Reese, which ultimately won her the Oscar for Best Actress.  And so Miss Piggy does all she can to humiliate her rival at a build for Habitat for Humanity.  In classic Miss Piggy form, she and Reese cause an accident, infuriating Kermit as he storms in to her dressing room for an explanation.  While I expected to have Miss Piggy go crazy and threaten Kermit for not siding with her, I was shocked when all of a sudden the pig started to sob. Miss Piggy was actually embarrassed by her own actions.  People – this is big. This might be the biggest bit of character development we’ve had from Miss Piggy in years.  I cannot remember the last time she felt bad about something she’d done, let alone request a public forum to apologize. 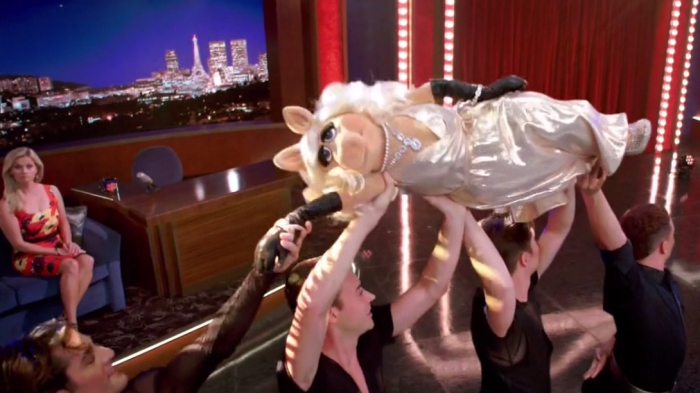 Which brings me to that apology.  I’m willing to bet that the masses rejoiced when Miss Piggy started to rhyme, because it was the first inclination that a request was being met. For the first time in the new series, we had a musical number!  The song was alright, with Miss Piggy apologizing in classic high production form, but it’s overshadowed by something else.  How the heck did they do that number?
Miss Piggy crawls on her desk, is picked up by some dancers, and there’s a good 10 seconds where she’s seen full bodied.  I have no idea if Eric was in a blue Lycra suit and they’ve done an amazing job of removing him, or if the remote controlled puppets are getting way better.  Either way, it was astounding, a true feat of the medium, and I can’t wait to ask Eric how it was done!

Reese Witherspoon threw herself in to the show head first, and was an absolute delight to watch from beginning to end.  She’s another in the already long line of guest stars in the new show that have been perfect, because they’ve treated The Muppets as real, functioning people/rats/dogs etc.  I believed Reese when she was furious at Miss Piggy.  I adored her talking head with the camera.  She might be my favorite of the guest stars so far.  I hope the show continues down this road of one guest star per episode, because it gives the star a chance to shine and do their thing, instead of throwing two or three (still amazing) stars in the mix, and not using them to their full potential (such as Nick Offerman in episode 3).  It was a shame Kermit and Reese didn’t have a lot of time together, because she has constantly been named as one of Kermit’s main celebrity crushes.  If you’ve yet to see their Dubsmash video of Lionel Richie’s ‘All Night Long’, make sure you check it out! 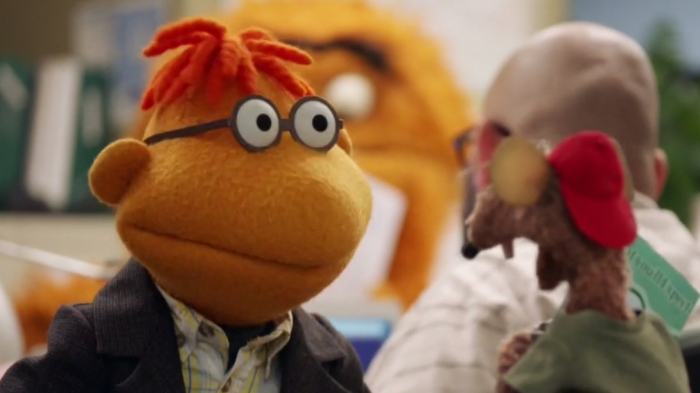 We’re given a hilarious little B-story this week between Scooter and Rizzo.  After Rizzo hits Scooter’s car with his comically big Jeep, he sends Scooter on a wild goose chase, hunting down all his shifty relatives who claim to be lawyers and doctors.  How great is it that we get a storyline between these two, who haven’t had a lot to do with each other in the past?  My absolute favorite part of Episode 2 was the interactions between Bobo and The Muppet Newsman, and I love the fact that the writers are pairing up characters who don’t generally have an established relationship.  That said, this storyline suffered from something that I think needs to be addressed.
The show is about the private lives of these characters that we know and love, and yet we don’t seem to be seeing a lot outside of the studio.  There was no reason that we couldn’t follow Scooter to these different uncles/nephews, and have them point him to another location.  The Muppets have a wealth of rat puppets that could be used – I’d love to see Bubba as Rizzo’s shifty uncle. 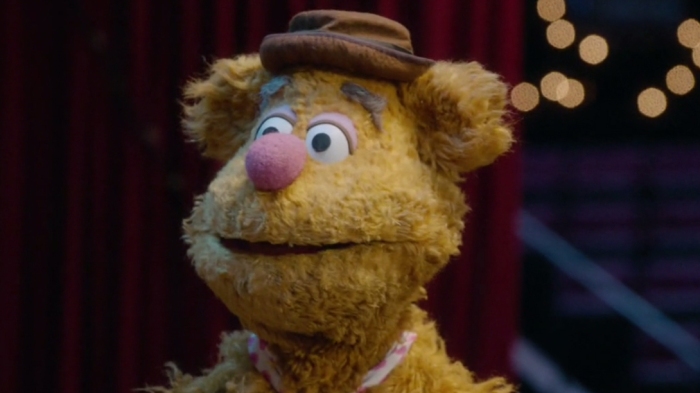 Hey, did you know that Fozzie’s in this show?  That’s right.  You might have missed him, but he’s been there.  Remember?  He got that girlfriend?  Then he broke Jay Leno’s candy dish?  Then he wrote a bad script?  Then he hurt Statler?  Well now his girlfriend’s mad at him!  Okay, I know I’m being unfair, Fozzie’s a lovable character and one of the leads of the show.  I’m just not sure we need a story with him every single week.  There’s such a huge range of characters that can be utilized, I think it’s okay to give Fozzie a break every so often.  Why not use some of the more obscure characters?  Let’s see what happens when Sweetums and Beautiful Day Monster are stuck in a traffic jam together, or what happens when Andy and Randy are forced to move in with Angus McGonagle.

This is a great episode of the show, and it really feels like the writers have been taking on board some of the criticisms that reviewers have put against it.  We’re starting to get in to the episodes now that were being filmed as the show had started to air, so it’s not impossible that the team are looking to us Muppet fans for guidance on how to make these characters as pure as we remember them to be.  If they’re reading this, let me say something directly to them – If you continue taking the show in this direction, and remember to keep the character development happening, you’re going to have a classic on your hands in no time.  Keep up the good work!