Kieran Moore – As I was coming towards the end of my original series of charts based on Muppeteers I suddenly realised there was a performer and a show that had been largely overlooked. That performer is Noel MacNeal and the show is Bear in the Big Blue House. I tried everything I could to feature him in the 20 charts I made, but I just couldn’t do it.

I did however vow that quite quickly into my new theme-based series I would spotlight the show as a whole.

By the time Bear and his friends cha-cha-cha-ed onto our screens I was already an adult, so very much not the target audience for the show. My eldest nephew was though and I have fond memories of his Bear toys and taking him to see the live show at Walt Disney World (where we all sang “Where oh where oh where is Shadow?” together). As much as at the time the show was no more than a cultural blip for me, in hindsight I can see the show is that generation’s Fraggle Rock and with that in mind I understand the gravity of doing this chart right. No pressure then…. 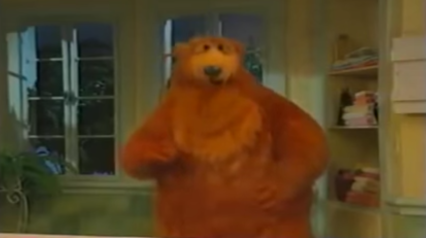 I love the guitar-led chorus of this song. It’s very 90s and takes me back to my Brit Pop youth. This could be blur or Oasis on another day! The contrast between the dramatic verses and care-free chorus is probably what makes this song stand out for me. I also have to take this opportunity to say how great the Bear puppet is. It’s strange because the technology here is exactly the same as Big Bird and yet with Bear it seems somehow more fluid and expressive. I bet a lot of parents watched this and wondered how it was done. Noel’s physical performance in this song is another reason to love it – his jaunty dance moves are a lot of fun!

Now I hear this song straight after the one above they seem pretty similar on the face of it, but this is actually quite different. The arrangement has got a sweet country twang and Noel (as Bear) offers up a bluesy vocal with some extra jazz scatting for extra measure! There’s a lot going on here. I’ll say it now and get it out of the way – Noel MacNeal is a superb singer. As you can hear on this track, and we’ll discover further on, he can sing in a whole range of styles and his vocals are always crystal clear and emotive. I can only assume that he has an innate musicality (or has been very well taught) as there is an ease about his singing that isn’t easy to learn. Muppet Wiki states that Noel is nephew to Cab Calloway (citation required) and I could certainly believe it based on vocals like this.

There’s such a lot of great holiday music from Bear in the Big Blue House that I could fill a chart with just those songs and never one to look a gift chart in the mouth for that reason this song is representing all of them. I don’t know what it is about The Henson Company, but boy do they know how to do the holidays. From The Muppets to The Fraggles and Sesame Street to Bear, they just get it so right. This song comes from a pair of episodes so beloved that I don’t think a casual observer like me can really do it justice. I’m sure there are bigger fans out there that could write a whole article on the subject of Bear at the holidays. (In fact, if you can why not get in touch with the site and offer your services?) This song represents the peaceful, reflective aspect of Christmas Eve perfectly. The late, great Lynne Thigpen as the voice of Luna has such a reassuring tone that it feels like a big warm Christmas hug complete with peppermint cocoa.

The differences between this song and the last one are like night and day (ha ha)! This song is the ideal way to start a day with its fun calypso feel. If it doesn’t make you want to fling open the curtains and celebrate a brand new morning that I don’t know what will. Peter Linz does a great job performing as Ray (and Luna) while the character’s distinctive vocals are performed by Broadway veteran Geoffrey Holder. His rich, deep voice is not what I would expect the sun to sound like and yet somehow perfect all at the same time. I have to praise the fantastic harmonies here – they really are superb. 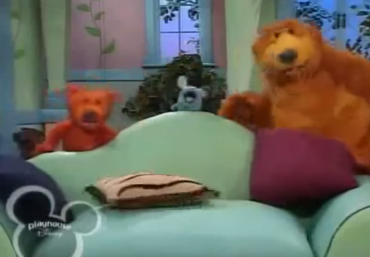 This is the first entry in the chart that includes all of the main Bear in the Big Blue House cast and it’s such a fun high energy number. Listening to this song makes it almost impossible not to want to “clean up the house”, but I’m doing my best to resist the temptation as I look at the pile of dirty dishes in the kitchen! This song has a gospel vibe and that is never bad thing in my book. It’s a musical style I’ve always loved and with its hand-claps and organ-based arrangement I could listen to this again and again. I just wish it was longer. Noel delivers a great growly vocal, but I want to take this opportunity to really praise Tyler Bunch, Peter Linz and Vicki Eibner for their incredible work as Ojo, Treelo, Tutter and Pip & Pop. All three give brilliant performances with what are essentially very simple puppets. They fill them with such life it’s a wonder to watch.

This is the song that first made me see the connection between Bear in the Big Blue House and Fraggle Rock. It feels like a “missing” Fraggle song to me and I could picture it being led by Junior Gorg. He could play saxophone too so it’s perfect. I see it having a Dixie Wailin’ feel with Junior backed by assorted Fraggles who then make a break for their tunnel at the end of the song. Anyway, I’m getting carried away, but tell me you don’t hear it too? Once again we get a great gospel tinged performance from Noel that showcases his bluesy growl. Love truly is incredible and sometimes it takes a six foot bear to remind us of that fact!

It’s not on purpose, but there seems to be a rock/gospel/blues vibe to the last few songs on the chart. I guess my inner “Blues Brothers” fan is picking them! It’s a great film, but totally not what we’re here to discuss… Seriously though, who doesn’t love a movie that includes the line “Do you have a Miss Piggy?” The album version of this song has a slightly different arrangement to what you’d hear on the show so I’ve linked to that. The addition of backing vocals really adds an extra layer that makes the original seem a bit dull in comparison. I can picture Bear onstage in a Vegas revue performing this song backed up by feather-clad dancers and full big-band style orchestra. The set is bedecked with rows of light bulbs that flash in time to the music and Bear is really giving it his all. I don’t know why my mind went there, but it did…

Although traditionally sung by Bear & Luna at the end of each show, this version comes from the episode “And to All a Good Night” and features the entire cast. Speaking of which, the cast members already name checked in this article are joined here by the ever wonderful Jim Kroupa and one of my new favorite Muppeteers, Carmen Osbahr as Ursa. I think she sounds great here and a million miles away from Sesame Street’s Rosita. Ignoring the fact that Ojo loses out on a solo line (instead adding harmonies with Luna at the end) this feels like it would have been the perfect way to end the whole series. The song in its usual form is amongst the most iconic on the show and is simply beautiful, but I think this version with the whole gang is extra special.

Yeah, I know. I’m as surprised as you are that this song isn’t number one based on cultural significance alone. My nephew had a singing, dancing Cha-Cha-Cha Bear toy back in the day and he absolutely loved it! I can’t believe he’s off to college this year! When I set out to write this chart I had it in my head that Bear in the Big Blue House was chock full of Latin-inspired music and although this chart has proved otherwise I think it must be my remembrances of this song that made me form that opinion. It really is impossible to keep still when this song is playing. The whole cast is fantastic supporting Neal’s lead vocal with trills and ooh-la-la’s aplenty. And did Treelo get a writers credit for “What Does the Fox Say?” If not he should have done, as the last few bars from him sound almost identical.

I guess since Shadow is the only main cast member not to have gotten a mention so far it shouldn’t be too much of a surprise to see her here at number one. I love this song. It’s not just the best song from Bear in the Big Blue House, it’s one of the best Henson songs ever and that’s not a claim I’d make lightly. I might even go one further and say it’s one of my favorite songs period. I love a good folk song and this certainly is one. One of the things I particularly like about it is that I could pick up this song and drop it into a folk club and it wouldn’t sound out of place just as it is. Sure, you could change the references to otters and such, but you wouldn’t need to. Peter Linz (him again) does a brilliant job puppeteering Shadow, but the real credit here has to go to Tara Mooney who is singing. Sadly for us (as I’m sure she’s happy) Tara now works in fashion design rather than music, but I did find a few comparatively recent tracks on SoundCloud so maybe we’ll hear more someday?

I hope you’ve enjoyed this look back at the other Henson property owned by Disney (Come on Mickey, we must be ready for a re-boot by now? Johnny Depp can play Bear and Tim Burton can direct.) I know I’ve enjoyed getting reacquainted and seeing how Bear in the Big Blue House fits in with the rest of the Henson canon. To me it’s the missing link from Sesame Street to Fraggle Rock, despite coming many years later. It’s funny how certain things from your childhood stick with you and I don’t have that point of reference for this chart so I’d love to hear from readers that watched the show when it originally aired as I’m sure your picks would be different from mine. Please comment below. I also would very much like to thank Noel MacNeal and the entire cast for their fantastic work on the show and for being to the 90’s what Fraggle Rock and Sesame Street were to the 70’s and 80’s – a way for new fans to connect with the world of Jim Henson and all the crazy yet heart-filled shenanigans that it contains. Thank you.