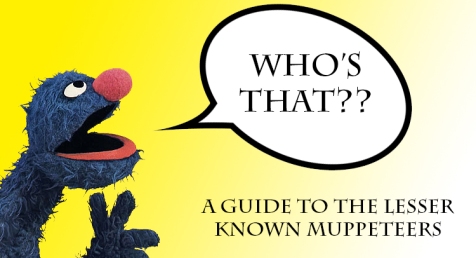 In ‘Who’s That?? we aim to educate the masses about some of the lesser known Muppeteers – one’s who maybe don’t always get the recognition they deserve.

Jarrod Fairclough – I find it extremely important to point out just how many extremely talented female Muppet performers there are.  It’s a medium that is dominated by men, which can sometimes relegate the women to the back.  It’s crazy to think just how many Muppet performers have been around for a long time, and yet the average Muppet fan won’t know their name.  One case in point is Alice Dinnean, an incredible Muppeteer who has been around for close to 20 years.

Alice discovered her love for puppetry when she won a pig puppet in an essay writing contest in California. Years later she began a successful internship at the Center for Puppetry Arts in Atlanta, which lead to a job with The Jim Henson Company.

Alice began her Muppet career performing on Sesame Street, in videos like Elmocize and Learning to Share.  From 1997 to 2004 she was the primary performer for Goldilocks, and in that time was featured in a substantial amount of episodes.  Alice joined the cast of Bear In The Big Blue House where she was the original performer of Grandma Flutter, the grandmother of Tutter.  In 1996 she took over the role of Sherry Netherland, the owner of the Furry Arms Hotel.

Alice began performing with the Muppet troupe beginning on Muppets Tonight, playing various background roles and right hands.  She performed in Muppets From Space and It’s A Very Merry Muppet Christmas Movie in a similar vain.  In The Muppets Wizard of Oz Alice took on the role of Camilla the Chicken.  She performed the roles of Afghan Hound and Wanda in the 2011 film The Muppets.

Away from The Jim Henson Company and Disney, Alice has worked on various TV shows like Angel, Jack’s Big Music Show (created by David Rudman), Cousin Skeeter, Crank Yankers and Scooby Doo.  She also performed the puppetry for Puppet Britta in a Season 4 episode of Community.

With the recent pick up of The Muppets TV series, it isn’t unreasonable to think that Alice could return to continue her roles that she started in the 2011 film.  Wanda appears in a silent cameo during the pilot presentation, and could have more of a presence in the new series.  With any luck she could be in the running to play Skeeter, if Disney stop ignoring my calls #FansForSkeeter.

2 thoughts on “Who’s That?? A Guide To The Lesser Known Muppeteers Part 3 – Alice Dinnean”