Michael Wermuth – Welcome back to part two of my lesson on recurring Sesame Street segments.

Colambo – debuted around season 25
A series of segments featuring a lamb detective, Colambo (of course a parody of the series Columbo), whose cases were usually related to nursery rhymes, such as “The Case of the Plumb Plunger”, in which Colambo finds out what happened to the plumb in his pie by asking questions to his janitor, Little Jack Horner. 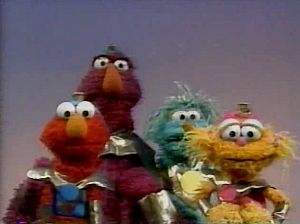 Super Morphin’ Mega Monsters – debuted around season 26
A parody of Mighty Morphin’ Power Rangers, this series of segments starred Elmo, Telly, Zoe, and Rosita as the titular super hero team as they solve problems caused by the trouble-making monster Zostic of the planet Enormous. Missions have included teaching a girl not to litter and having monsters not discriminate based on fur color. 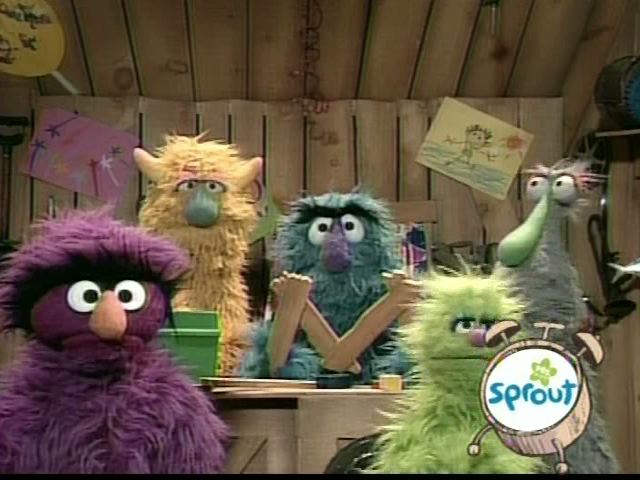 Monsters in Day Care – debuted season 30
Monsters in Day Care found Herry Monster traveling to day cares to talk with kids, and then going back to a club house full of monsters (including the Two-Headed Monster) to tell them about what he had learned.

Ernie’s Show and Tell –debuted season 30
In this series of segments, Ernie talks with kids who show him things that they have, including a trumpet, various jewels, and a variety of drawings. After that came several recurring segments that appeared in every episode, or every other episode, of a given season. Some of longer and have been called “Long Form Series” (and have been shown on their own in countries outside of North America), others are shorter.

The first recurring segment to be really long – each one lasts 15-20 minutes – Elmo’s World closed all but two episodes from seasons 30 to 42. Elmo’s World takes place in a crayon-drawn world hosted by Elmo, who is joined by his goldfish, Dorothy, and by the silent Mr. Noodle – who, starting in season 31, would alternate with Mr. Noodle’s brother, Mr. Noodle. Each segment has Elmo thinking about a different subject, including balls, drawing, dogs, fire fighters, and ears. Each episode follows a structure, with such segments as Elmo asking Mr. Noodle, some kids, and a baby how you do something, some “yes and no” questions regarding the subject, Dorothy imagining Elmo as the featured subject, and a song about the featured subject (always sung to the tune of “Jingle Bells”). Each episode features cameos by at least two other familiar characters (always guaranteed in the e-mail segments, which were introduced in season 32 as replacements for segments where Elmo showed a home movie, and in the “yes or no” question segments), and sometimes others were heavily involved throughout the episode.

A handful of home video specials were basically hour-long Elmo’s World segments, while the linking footage for The Street We Live On involved the Elmo’s World format.

Hero Guy – debuted season 32
This series features Baby Bear and his imaginary friend, Hero Guy, a drawing Baby Bear made, as they solve problems relating to what Baby Bear has drawn. This is one of the few recurring segments from before Sesame Streetswitched to its “block format”, and then would be seen in every other episode for a few years.

Monster Clubhouse – debuted season 32
Like Elmo’s World and Hero Guy, Monster Clubhouse originated before the format change. This series of segments takes place in a clubhouse, with members Groogle, Phoebe, Narf, and Mel, as they do a number of different activities. Originally, the segments ran about ten minutes long, but in season 33 it was considerably shortened (and existing segments were edited to accommodate the short length) and it ran in every other episode in season 33, alternating with Hero Guy (though technically it alternated with other monster segments, which along with Monster Clubhouse were introduced as “Monster Time!”). 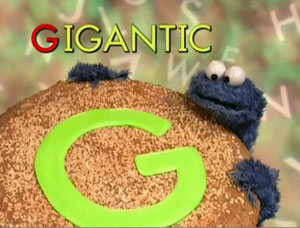 The Letter of the Day – debuted season 33
The Letter of the Day has changed formats quite a bit over the years. Originally, the segments had Cookie Monster resist the urge to eat a cookie with the letter of the day written on it, but despite his best efforts always ended up eating it anyway. This was then replaced with Prairie Dawn introducing the letter, which now was a regular Styrofoam letter but despite not being on a cookie she still had to prevent Cookie Monster from eating it (and failed at that). In season 36 the format was changed to a game show in which Cookie Monster is offered a prize of cookies if he can find five items that begin with the letter of the day, the last item always involving Prairie Dawn and the announcer pointing out that what Cookie brought does NOT start with that letter (but then Cookie finds a way for it to qualify anyway). All of these Cookie Monster “Letter of the Day” segments would alternate with each other until season 39, when the segments took place on the street, had a different character, and often had something to do with the street story (or the later Number of the Day segment in that episode), and then in season 45 the segments had Elmo leading the cast in a Letter of the Day song (though the only difference between these segments was the featured letter). 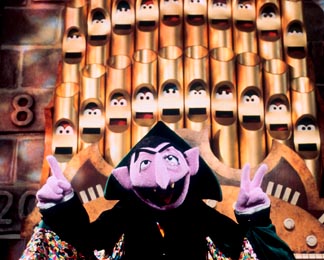 The Number of the Day – debuted season 33
Like the Letter of the Day, The Number of the Day has changed a lot over the years. Originally, the segments had The Count playing an organ that counted up to the number of the day (why the Count didn’t just count on his own I’ll never know), then in seasons 34 and 35 a few different segments with The Count were made without being tied to a format, and then in season 36 segments for the numbers 1-10 were special remakes of the opening to Jim Henson’s “Baker films” while numbers higher then ten had The Count count until being stopped by a Countess. In season 39, the segments would take place on the street, with different characters involved, in season 40 Murray began introducing the number of the day (as he had become the host of the show at that point), and in season 45 The Count has once again hosted.