Michael Wermuth – This year marks the 40th anniversary of Saturday Night Live, a show that made stars out of some of the biggest celebrities in the world. But since this is The Muppet Mindset, that’s not what we’re here to talk about today. No, today’s focus will be on a fairly obscure series of segments from the first season. During the shows first season, a new group of Muppets were created for a series of sketches called Land of Gorch, featuring such characters as King Ploobis, Scred, and The Mighty Favog. These Muppets only lasted on the show for the first season, and were barely used again afterwards.

So now, let’s take a look at my top five favorite Land of Gorch segments.

The best segments came later in the season when the Muppets were on their way out the doors of SNL. In these later segments, they appear outside their Gorch set (which is said to be destroyed, though the set would be used as a backdrop in the first Coneheads sketch) and spend their time interacting with the hosts and cast. In this show, Ploobis and Scred come to the show and start hitting on the host, Raquel Welch. She points out to them that they are just puppets (shame on her!) and don’t exist below the waist. Chevy Chase then comes in and tells them that the Muppets act was canceled for this show, the Muppets haven not gotten the message. Afterwards, they leave, and Chevy tells Raquel to take off her clothes. 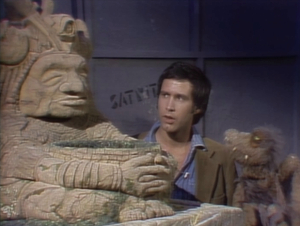 In the first sketch, we get to meet the characters. Ploobis sings a variation of “This Land is My Land”, strangles Scred (much like Homer Simpson strangling Bart), briefly flirts with Vash (performed her by Rhonda Hansen instead of Fran Brill, who would perform her in all other appearances), and learns that Peuta has a condition, so Ploobis and Scred go seek the Mighty Favog for advice. His advice is simply “Cheer up, it could be worse”.

This is the first Gorch segment that I saw. First I saw a portion of it in The World of Jim Henson (and had previously seen brief clips in montages in The Muppets: A Celebration of 30 Years and The Secrets of the Muppets), and then I saw the full segment when I rented a VHS copy of the first episode (and yes, the fact that I knew the Muppets were in this one was the reason I rented it).

The only sketch where Ploobis and Peuta’s son Wisss is a main character finds them dealing with the fact that Wiss is smoking craters. Ploobis tries to get Wiss to stop, with no luck, and at one point tells Scred to tell Wiss what he’ll do to him if he doesn’t stop – by doing that to Scred. When they go see The Mighty Favog for advice on getting Wisss to stop, it turns out that Favog is stoned himself.

The final appearance by the Gorch Muppets came in the second season premiere, hosted by Lily Tomlin. In this one, Lily finds them in trunks backstage. They tell her about how not only have they been fired from SNL, but they also weren’t hired to appear on The Muppet Show. They accompany her with a rendition of “I Whistle a Happy Tune”, except they are unable to whistle.

Previously, Lily Tomlin and Scred appeared together and sang “I’ve Got You Babe”. I realize that that one’s considered one of the best Gorch segments (and one of the few that’s not cut in syndication), but I have one simple reason for not including that one on this list: I haven’t seen the whole sketch (and if I had seen it in syndication where the beginning is cut I would still consider it “seeing the whole sketch”).

And that’s my list. As I said, these characters have barely been seen since. Most of them are in the finale in The Muppet Movie, and Jim Henson used Scred in special video footage to show his workshop what the Sketches fromThe Dark Crystal should look like. Oh, and the Christmas sketch with Candice Bergan featured a character called Food, who would later be re-used in appearances on The Muppet Show, Fraggle Rock (making him not only the only SNL puppet to be reused since, but the only pre-existing puppet to appear on Fraggle Rock), and The Jim Henson Hour.