Michael Wermuth – Today, class, we learn about all the great recurring segments from The Muppet Show. One of the best things about a variety show is its recurring sketches, short segments that are like a regular television series, only a lot shorter and not in every episode, giving a bit of familiarity to the randomness. And now, without further ado, here they are!

At the Dance
Originating in The Muppet Show: Sex and Violence, “At the Dance” was a series of segments where Muppet couples danced and told jokes, mainly an excuse to include puns that may have difficulty being used elsewhere. During the first season, the most frequent couple was George the Janitor and Mildred Huxtetter, while other frequent dancers included Miss Piggy, Rowlf, Animal, Zoot and Janice, and a whatnot woman who spoke very loudly. After being featured in all but one episode during the first season, it would appear less frequently in the later seasons, and when it did appear, the jokes were usually themed around a certain subject, or the segment took place in a unique location (like a square dance or a disco). The entire episode with Carol Burnett in Season 5 was turned into a dance marathon, making it essentially a 30-minute At the Dance.

Talk Spots
The talk spot was a regular spot where Kermit interacted with the guest star, sometimes invaded by other characters, including Fozzie, Miss Piggy, and Animal. On rare occasions, other characters took over the hosting duty from Kermit. Fozzie interacted with Phyllis Diller and Don Knotts, and Sam the Eagle chatted with Jean Stapleton. Among the topics discussed include rehearsing the talk spots (with Rita Moreno), healthy eating (with Ruth Buzzi), and how an actor can turn into a vampire (with Vincent Price). When the silent Mummenshaz were the guests they found other ways to do the talk spot. Appearing in all but three episodes in the first season, the talk spot would only appear occasionally in seasons two and three before being dropped completely.

Veterinarian’s Hospital
Appearing in all five seasons, Veterinarian’s Hospital was “the continuing stooooooory of a quack who’s gone to the dogs,” a medical segment starring Rowlf as Dr. Bob, joined by Miss Piggy and Janice as his nurses. Patients ranged from Fozzie Bear (twice) to a cow to a telephone, but the segments focused more on the staff making bad puns based on who or what their patient was. Once, Dr. Bob had to suffer being the patient, with Christopher Reeve taking on doctor duty. In another, when the announcer does his usual sign-off (“tune in next week when you’ll hear Dr. Bob say…”), Dr. Bob asked who he was, leading to a repeat of that very segment.

Fozzie’s Monologues
Fozzie Bear was the comedian on The Muppet Show, and his usual comedy spot appeared frequently in the first season. With a park backdrop, Fozzie often told jokes while being heckled by Statler and Waldorf, though he occasionally experimented with his material (like when Scooter talked him into doing “the telephone pole bit,” and the time Fozzie spontaneously got Kermit to participate in his act, having to shout “Good grief! The comedian’s a bear!”). After the first season, Fozzie’s usual comedy spot appeared less frequently, and usually with a special gimmick, ranging from ventriloquism to magic to telling jokes while roller skating. 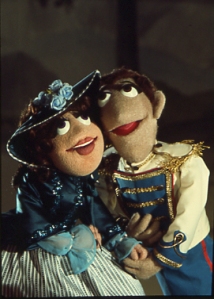 Wayne and Wanda
Always introduced by Sam the Eagle, who considered them the only decent act on the show, Wayne and Wanda would sing a song, but were always cut short by some form of bad luck related to a song lyric. When they sang “Stormy Weather”, it rained on the set. When they sang “Trees”, a tree fell on them. When Wanda upstaged Wayne with a rendition of “I Get a Kick Out of You”, Wayne kicked her. Once, they gave a performance of “Row, Row, Row”, and actually made it into the chorus… Only to sing in the (cardboard) water. Wayne and Wanda didn’t make it past the first season, though in Season 3 Wayne began making solo appearances, and in the fourth season it was revealed that Kermit had fired them. 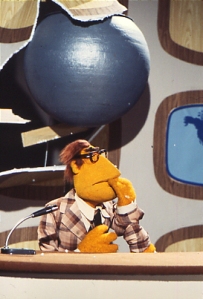 Muppet News
“Here is a Muppet News Flash!” Appearing in all five seasons, Muppet News featured The Newsman reading news reports. During the first season, the humor would come from the weirdness of the news stories, and often featured The Newsman interviewing a strange person played by the guest star, with such stories as a man (played by Paul Williams) who had an “interesting” story, a doctor (Peter Ustinov) who thought he found the cure for the common cold, and a woman (Phyllis Diller) who built wings and flew across the country (by buying a plane ticket). Starting in the second season, the humor would typically become physical, with The Newsman often being the victim of whatever he was reporting on, usually with something falling on him, from a cow (at the stock market beef falls dramatically) to various sports equipment and instruments jettisoned from an air plane to a refrigerator (the result of a refrigerator-throwing contest). 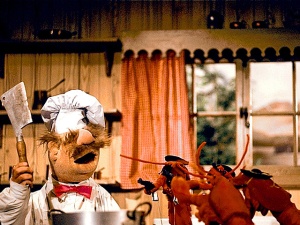 The Swedish Chef
Debuting in The Muppet Show: Sex and Violence, The Swedish Chef hosted a recurring cooking segment, while being hard to understand. The Swedish Chef often tried to cook livestock (including lobsters, a duck, and various chickens), sometimes got attacked by food not made from animals (such as spaghetti and dough), and at times made food based on puns (like chocolate moose). Reportedly, the writers would take breaks whenever it was time to tape a Swedish Chef sketch so they could watch the mayhem. 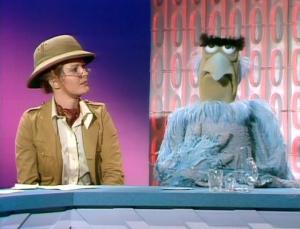 Panel Discussions
Appearing only in the first season, the panel discussions were moderated by Kermit, and with one exception always featured the guest star, sometimes appearing as a character and sometimes as themselves, and joined by other Muppets, including Miss Piggy, Sam the Eagle, and The Guru. Topics ranged from “Is Conversation a Dying Art?” to “What is the Meaning of Life?” to “Gourmet Dining.”

Muppet Labs
Debuting in the first season, Muppet Labs featured Dr. Bunsen Honeydew working on his latest inventions, including the All-Purpose Tenderizer and the Gorilla Detector. Bunsen worked alone in the first season, and as a result was often the victim of his inventions. His assistant Beaker was introduced in the second season, and would more often be the one who gets victimized. Beaker’s misfortunes have included getting his nose burnt from the nose warmer, losing his nose after eating edible paper clips, and almost getting hit by bananas sharpened by the banana sharpener. But it’s not always a misfortune for Beaker – he once got cloned in the copying machine and chased after Bunsen, and when it was time to test the nuclear powered shaver, he was saved by the heavy lead helmet.

The Talking Houses appeared in quick black-out bits during the first season, where each installment was an excuse to make a house-based pun. Among the exchanges were “My brother’s got ghosts in his attic. He’s on the ten most haunted list,” and “My insides are killing me!” “Ulcers?” “No, movers.”

Debuting in the second season, Pigs in Space featured the space adventures of Captain Link Hogthrob, First Mate Miss Piggy, and Dr. Julius Strangepork. Many of their adventures involved them struggling to keep their spaceship, the S.S. Swinetrek, running, while others would see them failing to communicate with alien life, and some involved making Miss Piggy the butt of gender stereotyping. On occasion, they had to face the mysterious Dearth Nadir, including the time the Swinetrek was hijacked by the stars of Star Wars.

“Ridding the world of evil comes… Bear on Patrol!” Bear on Patrol debuted in the third season and starred Fozzie as Patrol Bear and Link Hogthrob as his sergeant. Patrol Bear has arrested criminals for such offenses as impersonating an officer, assaulting an officer, and making funny noises in public (the latter being Beaker). Unfortunately, his sergeant’s stupidity would often make Patrol Bear a victim. Once, Fozzie and Link were victims to a handcuff salesman, who handcuffed them together and then robbed the place.

One thought on “Muppetology 101: Recurring Segments on The Muppet Show”