Michael Wermuth – Well, it’s been awhile since my last “5 good and bad things about…” article, so here’s one about the MuppeTelevision segments of The Jim Henson Hour. I really like The Jim Henson Hour, and feel like the MuppeTelevision segments are the best parts, but there’s still some things that I don’t like much, so I’ll list five good things and then five bad things. 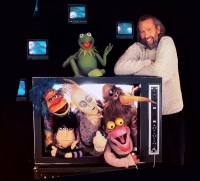 1.   The new characters
For the most part, the various new characters on this show are great. Digit and Leon are the best of the new characters, and I most strongly wish they would have returned for later productions. Vicki, Waldo, and Lindbergh are also great characters, though I can live without them returning (technically I can also live without Digit and Leon returning). Zhondra, Ubu, and Chip all have great designs and it’s a shame that they were limited to just two episodes (though at least Zhondra and Chip did continue to make background appearances after the show ended). Flash and Beard have great designs as well and it’s a shame the show didn’t last long enough for their personalities to be developed much. And of course, there’s Bean Bunny (who technically debuted in Tale of the Bunny Picnic) and Clifford, the two who would continue to be main characters after the show ended. While they are great characters, I do like them less than most of the characters mentioned above. Many of the characters have really cool designs, but a lot of them also seem like they’d look out of place at the Muppet theater setting. 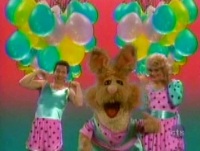 2.   The “Fitness” episode
One of the best MuppeTelevision episodes, and the only one I’m singling out as one of five good things. This one has the best balance of new and old characters, with a heavy use of characters from The Muppet Show (it helps that this is one of only two episodes Richard Hunt performed in). Smokey Robinson’s two numbers are great, it’s interesting to see Link Hogthrob have his own control room plot, and there’s just so much to like about this one. I feel the shows ratings might have been better if this was the first episode.

3.   The Muppet Central set
The computer animated set for Muppet Central was awesome. I just like seeing all those monitors, with video footage of the Muppets (most of which were shot just to be used on monitors in the background). Yeah, some fans may say that the set was a distraction, or that these scenes were limited due to a non-physical set, but I like it.

4.   The Closing numbers
Almost all of the closing numbers are among the shows best numbers. From “Chattanooga Choo-Choo” to “Sweet Vacation” to “Jump (For My Love)”, the closing numbers are exciting ways to end each episode. Many of these numbers feature the majority of the main cast and often cut away to characters and sets from earlier in the episodes, something that had kind of become a tradition in Muppet productions since The Muppets Go to the Movies. 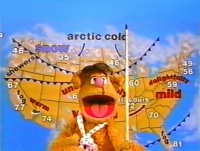 5.   Fozzie’s few appearances
Fozzie only made two appearances in MuppeTelevision (and one in the second half-hour special Miss Piggy’s Hollywood), but they are both among the shows highlights. Fozzie was hilarious taking over for Willard Scott on Today and starring in a ghost story.

1.   The first two episodes are weak

I feel like the first two broadcast episodes–“Outer Space” and “Oceans”–were poor choices for episodes to start with. “Outer Space” is still a good episode (“Oceans” is my least-favorite of the series), but the first two episodes mainly focus on Kermit, Digit, and to a lesser extent Lindbergh and Waldo, with the rest of the cast limited to one-scene appearances (in addition to coming back for the first closing number). In fact, the first episode barely even has any sketches starring any of the intended main characters (Bean Bunny starred in one, and the whole cast did the closing number, if that counts). The other episodes showcase more of the main cast better. Interestingly, the first two broadcast episodes are among the last ones in production order.

3.   Nothing goes wrong (is that a bad thing?)
On The Muppet Show and Muppets Tonight (and other productions where the Muppets put on a show), something often goes wrong in sketches and production numbers. But on this show, all the acts go as planned (as far as the viewer knows). I guess the closest to something going wrong is when Fozzie accidentally locks Willard Scott in a vault and takes over as the Today show weather man. Now, this “bad thing” isn’t really that bad, but it is a little odd that Kermit has suddenly found so many acts that don’t go wrong on-camera.

4.   Segments with humans who are not guest stars
Unlike The Muppet Show, nearly every episode features sketches with live actors who are not the guest star And many of these segments are not very good. While there are a handful of segments with humans that are great (like the storytime segment from “Power”,  the ghost story with Fozzie in “Videotape”, and the Gorilla Television segments), most segments that prominently feature humans not played by guest stars (including the Bootsy and Brad segments, the farmer segment from “Fitness”, and the segment from “Food” where a stock boy explains where food comes from) are very weak and in some cases too weird. Would they have been better if they just used guest stars or Muppet characters in their places? The world may never know.

5.   The guest stars don’t appear in the studio

The guest stars never appear in the control room with the Muppets. Any “backstage” interaction between the Muppets and guest stars required the guests to appear on monitors when they interacted. In most cases it’s rather awkward (there are exceptions, like with Smokey Robinson and Buster Poindexter). I don’t really understand why the guests couldn’t have been inside the control rooms… Other shows had the guest stars on raised platforms. Couldn’t they have just used a high platform with the blue screen sets?