Marjorie Aimard – Everything began when I was nine years old. When I was nine, I saw the Muppets for the first time Muppets TV, a French-only Muppet TV show. It was a little bit like The Muppet Show, but with French stars and songs, only sketches and jokes. I was immediately loving all of them. It was really funny I couldn’t stop laughing. I already had my favorite Muppet: Scooter. This world was so wonderful and as soon as the show ended I began to draw me and the Muppets together. I drew a comic of myself meeting all of the Muppets (something like 15 pages) and tried to draw my best Scooter. (See below!)

My mum and dad told me that they both loved the Muppets when they were young. They told me all about The Muppet Show from back in the day and how much they missed the show. They were just as excited I was about the new French Muppet show. But after ten episodes Muppets TV ended because it didn’t having a big audience… I thought it was a terrific show, and when it ended I thought I would never see the Muppets again in my life. I was really Sad.

I continued to draw comics and drew Muppets. I began my own comics and I created a character like Scooter. He looked like him but he was drawn in my style. (See picture at right.) All of my friends knew the character from my comics, but none of them knew he was a Muppet. In fact, they didn’t know what a Muppet WAS…

When I was 15 years old I changed schools. I lost all of my friends and didn’t really like my new friends and my new life. I was often alone at home and was discouraged and lonely. But then I found my old notebook with my Muppet story and I wondered what the Muppets had become. By now I had internet, so I started research. I saw a Muppet movie from… 2011?! REALLY? But… not in France? I watched it and it made me so happy. The Muppets gave me hope again! They “reboosted” me. Like a lot of Muppet fans, I saw a little bit myself in Walter. I saw Miss Piggy, Kermit, Gonzo, Fozzie–and Scooter was there too !

I continued to watch other Muppet productions and research more, and I found out a new movie was coming soon. I began to watch The Muppet Show (which is much better than Muppet TV) and learned all of the great songs. (This also helped to improve my english.) When I was 16, I met my best friend and I spoke to her about the Muppets. She was very interested and we went together to see Muppets Most Wanted. Her favorite was Constantine. I love him too, but my favorite is still Scooter.

Today i continue to learn songs and watch The Muppet Show or the Muppet movies–but I still have a lot of things to see! I continue to draw the Muppets too. Like this drawing of or different Scooters… 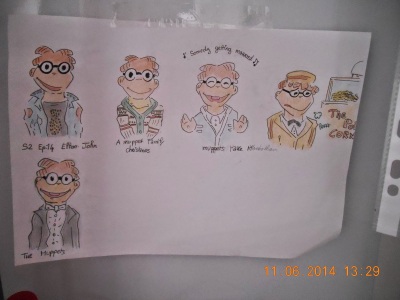 To me, the Muppets are very important. I believed I would never see them again when I was 9 years old, and when I did they changed everything for me. They really helped me to get out my sadness. For me, the Muppets are hope. They give me hope. I’m sure that I’m going to follow them forever.