Our friend Gordon Yarley was lucky enough to attend the World Premiere of I Am Big Bird: The Caroll Spinney Story at the Hot Docs International Film Festival in Toronto last night. Below is his review of the extraordinary documentary about an extraordinary man.

Gordon Yarley – Who is the man in the big yellow bird? The man responsible for bringing joy to millions world-wide, young and old, is known as Caroll Spinney, the very talented performer of both Big Bird and Oscar the Grouch for 45 years. A few years back we got the wonderful Being Elmo: A Puppeteer’s Journey about Kevin Clash, and it received high praise from critics and fans. This documentary based around Caroll Spinney’s life, seemed only natural (and overdue). 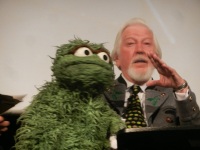 While multiple books have been written on the subject of Sesame Street, a book cannot contain video footage of the history. The sheer joy of seeing what is now referred to as Classic Sesame Street footage, both aired, and private behind the scenes made the sold out screening of this a wonderful documentary on the life and work of Caroll Spinney a truly incredible experience. 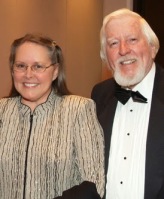 The one theme that ran throughout the movie was that of love, you could tell that Caroll has a lot of love to give, first to his work, and then to his friends, but mostly to his beloved wife, Debra. They both attended the screening and it was the first time they’d seen the movie in its entirety and they were very moved by it–as was the rest of the audience.

I Am Big Bird, is truly a remarkable movie. Looking at this from a fan’s perspective it was truly wonderful to see the behind the scenes rehearsal footage, as well as private parties and functions attended by the Muppet and Sesame Street families. The private footage was shot by Caroll and Debra over the years and it proved invaluable in helping to flesh out this wonderfully charming sweet man, who had nothing but praise for his friends and coworkers from Sesame Street.

One word of warning, make sure you have tissues nearby as there are multiple times where you will tear up, and it isn’t because of onions from Oscar’s trash can. The inclusion of footage from Sesame Street with the death of Mr. Hooper where you see the power of Caroll’s performance as Big Bird truly goes down in history as a very memorable television moment. They also show Caroll performing Big Bird at Jim Henson’s funeral. The movie also touches on Caroll’s past with an abusive father and shows how much he learned from his mother, who helped get him started on the path to puppeteery.

It is from the many interviews from fellow performers that you truly get to know what a kind, sweet man Caroll Spinney is, and how his past experiences have shaped the characters he performs today. While he may have trained Matt Vogel as a successor to Big Bird when he eventually steps down, it is clear that Caroll has no sign of stopping and as long as he can perform Big Bird and Oscar, he will.

One of the highlights of the evening for this writer was a talk back after the movie, where you could tell how touched Caroll and Debra were from all the love in the room. It was delightful to witness the charming sweet man talk about his life, his love and his career. Then he brought out Oscar–not Big Bird, since he requires a first class seat and Oscar can be put in the overhead storage. Watching Oscar performed live was truly a remarkable moment, one that won’t be forgotten.

Is this documentary worthy to own? Absolutely. Muppet fan or not, it is a very well made movie about the life and work of a remarkable man. Is there rewatchability? Yes. Though blown up on a big screen some of the older footage from television or the home movies understandably showed its age, it should be fine on a television watching at home. It was also extremely nice to see the actual Muppet performers themselves interviewed in the film. There’s plenty of on-screen interviews from many of the primary Sesame Street performers.

Word of note, there is some language used in the movie and certain sections that might not be appropriate for small children. Understandably, this is first and foremost an adult-aimed documentary. Despite this, however, everything shown in the film truly shows how utterly wonderful Caroll and Debra are as people and as a family, and everyone should strive to live life like them and show love towards everyone. I would have appreciated if dates could have been pointed out, as the film jumped back and forth quite a lot at times and it might be a bit hard for non-obsessed fans to follow along.

For the minor faults mentioned above, they don’t detract away from the charm and heart threaded throughout and I Am Big Bird is a wonderful documentary. There were many scenes, interviews, and home videos that had to be cut, and I hope that they will include more on the upcoming DVD release.

Overall I enjoyed that the documentary didn’t white wash any subjects and took a real, honest look at Caroll’s life and legacy. Not only do I feel genuinely changed by watching it, but I feel happier for having grown up with Big Bird and Oscar on my television screen as a child. Caroll Spinney is quite a remarkable man and I Am Big Bird is a remarkable documentary.

5 thoughts on “I AM BIG BIRD Film Review”