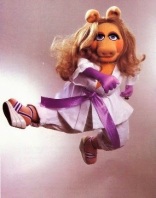 Ryan Dosier – The world of the Muppets (in this case, specifically the world inhabited by Kermit, Miss Piggy, and the gang from The Muppet Show and the subsequent films and series) is filled to the brim with characters of virtually every ilk. You have pigs, bears, chickens, monsters, rats, Frackles, dogs, whatevers, and things. Yet, despite all of this diversity, there is a distinct lack of female representation among the core group. Today I’m writing about why thats not okay, and to offer some ideas on how to fix it.

It’s so strange to me that there has never truly been an honest attempt to introduce another primary female character into the Muppet gang. Yes, you have Camilla the Chicken, Janice, and of course Miss Piggy, but there have been virtually no other prominent Muppet female characters in almost 40 years. Attempts to introduce new ladies fell through with Annie Sue Pig, Miss Mousey, Mildred Huxtetter, Gladys the cafeteria lady, Wanda, Hilda, Vicki from The Jim Henson Hour, Spamela Hamderson, Miss Poogy, and Emily Bear.

Another big problem is that the three semi-prominent female characters that the Muppets currently us are all performed by men. Of course this in no way means that Matt Vogel (Camilla), David Rudman (Janice), and Eric Jacobson (Miss Piggy) are anything short of insanely talented and magnificent with the characters–because they are–it just means that for a long time female Muppet performers have been unable to bring a character with lasting impact to life. That’s not for lack of trying, because Louise Gold, Fran Brill, Eren Ozker, and Leslie Carrara-Rudolph have all performed characters that could have gone the distance, but never connected with an audience.

The biggest and most frustrating problem here is that it seems like it would be so easy for the Muppet creative team to bring in a prominent female character. It’s not like there’s a lack of hugely talented female puppeteers (see: Leslie Carrara-Rudolph, Stephanie D’Abruzzo, Julianne Buescher, Alice Dinnean, etc.), and there are certainly voids that could be filled by female characters (Miss Piggy’s best friend, Fozzie’s female counterpart, a young girl with big dreams like Walter, etc.). There’s really only one reason not to add a new female character: lack of productions.

Yes, the Muppets are back and making big-time feature films, but that really isn’t the best platform for introducing new characters (although Walter and Constantine both proved that very wrong). The greatest platform for this would be a new Muppet television show… but who knows if that will happen. But there really should be a concentrated effort to introduce a new female Muppet in the near future. The number of female Muppet fans–both young and young at heart–is staggering and absolutely as important as the male fanbase (maybe even moreso). Muppet fans deserve more female representation.

The most obvious fix for this issue would be to introduce, in officially official capacity, Skeeter. For those who don’t know, Skeeter is Scooter’s twin sister in Muppet Babies but never made the jump to actual Muppet canon. She was a featured player in The Muppet Show Comic Book: Family Reunion series with an impeccable redesign by Amy Mebberson (see right). I can think of virtually no good reason not to bring Skeeter in looking exactly like this, performed by Leslie Carrara-Rudolph or Karen Prell or one of the other ultra-talented female Muppet performers. Skeeter would automatically be a huge hit, playing off of nostalgia from kids who watched Muppet Babies as much as I did.

So there are just a few rambles about why more female Muppets are needed and how it could easily be done. Come on, Disney, give us more ladies to cheer for, sing along with, and love. The Muppets have always been about inclusiveness, and adding more female Muppet characters is just the first step in becoming all-inclusive again.