Mitchell Stein – I just returned from yet another great trip to Walt Disney World, and saw and bought some really neat Muppet stuff. If you’re planning to head out to the parks soon, make sure to use this handy guide on where to find the greatest Muppet stuff in the parks, specifically, Disney’s Hollywood Studios.

Upon arriving to the Studios, you should head straight for the Chinese Theater, home of The Great Movie Ride (y’know, that building behind the giant hat). Not only is The Great Movie Ride a great attraction for movie lovers like myself, but it’s also a great spot for Muppet fans as well. Meant to mimic the Grauman’s Chinese Theater in Hollywood, the Studio’s Chinese Theater hosts many cement hand/foot prints as well. Near the front of the theatre courtyard, you’ll be able to find Jim Henson and Kermit the Frog’s handprints in the cement. If you’ve watched The Muppets at Walt Disney World you would’ve seen Kermit leaving his impression on the park (pun intended). Yep, the Kermit bit is actual footage from when Jim and Kermit visited the parks in 1990. 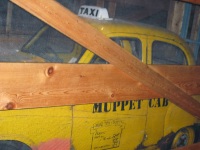 Next up is the Backlot Tour, located right next to Toy Story Midway Mania. In the Backlot Tour, you see thousands of great movie props scattered throughout the entire attraction. In the pre-attraction area, you’ll see cages of movie props. In the middle row, you can see Beauregard’s car from The Great Muppet Caper. Really, you can’t miss it. It’s the biggest prop in the room, plus it has the words “Muppet Cab” stamped over it. The hubcap is open, so you can look inside and get an idea of what the Muppet performers went through to shoot those scenes. It’s truly amazing.

Now, keep moving and board one of the Backlot tour trams. As you drive around, you can spot many vehicles from many movies, such as Roger Rabbit, Star Wars, Pearl Harbor, Herbie, and of course, the fire truck from Muppet*Vision 3D. At the end of Muppet*Vision (SPOILER) you’ll know that the Chef successfully blows the entire theater apart and then Kermit rolls out in a fire truck ensuring everything is okay. Well, according to my research, this fire truck in the backlot is the same vehicle used in the show, and used to sit right outside Muppet*Vision itself.

Now that we’ve seen all the minor stuff, it’s time to make a full circle and head for The Mother Ship, a.k.a Muppet*Vision 3D. 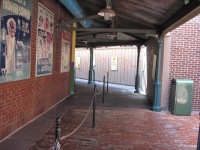 Muppet*Vision 3D is the ultimate home for the Muppet fan. It’s the place for you to freak out by the Muppet fountain, watch the show several times and for you to freak out about the fantastic cameos during the show. Before heading in, I suggest you check out the entire queue. A little known fact about the attraction is the actual size of the attraction line. When it opened in 1991, the line went all the way back and took over two hours to see! Now that line is currently empty, but you can still visit it to get the idea of what it once was. It’s a nice quiet spot in the park with some really funny gags and parody posters hanging on the walls there.

To see the full attraction, head towards Muppet-Vision and take a right when you reach the door leading to the side of the building. Keep heading straight down, and make sure you see everything. It’s a must see for any Muppet fan. There’s some hilarious parody posters and signs from Muppet Labs that get you from HERE to THERE. It’s so brilliant, it’s disappointing its hidden all the way in the back where no one ever visits.

When you’re done with the show, right outside to your left is The Muppet Store, known as Stage 1 Studio Store, as they started to sell other stuff not long ago. When in the store, take your time to look around. Each area of the store is supposed to be set after a different Muppet movie, such as The Muppet Movie, The Great Muppet Caper, The Muppets Take Manhattan, and even Muppet Babies.

Ask the cast members for the Stage 1 Store scavenger hunt, where you’re set to find many different clues and details that are around the store. Upon finishing the scavenger hunt, return your paper with the answers to receive a special prize.

Little known facts about the store: You see the Happiness Hotel set up there in the front section? According to the cast members, that set was the one that they used in The Great Muppet Caper and they shipped it to Walt Disney World in the 90s along with Beauregard’s car!

You see those Electric Mayhem standees up there on top of the shelf in the Muppets Take Manhattan section? Those were originally featured in Here Comes the Muppets! Which was a live show which took place in Hollywood Studios and used to perform in the location that Ariel’s Grotto sits today. The figures were put into storage after the show closed up and they took them out and displayed them in the Muppet store only last year!

On my visit, I was SHOCKED at the lack of Muppet merchandise. You would think that with a new movie coming out next month they’d actually have some merchandise for that movie, but rather they didn’t have any of the new Muppets Most Wanted merchandise which we’ve seen at the Disney Stores. Not sure if they added those this week or last week, but as of three weeks ago, it was completely free of that merchandise.

They had some Muppet plushes, including the bald Animal plush which I can barely stand, a few other plushes, including Gonzo, Kermit, Piggy, Fozzie and Beaker (no Walter, Rizzo, Pepe or Constantine) the Muppet comic books, mugs, T-shirts, books, and race cars. They also had three Star Wars Muppet figure sets which were half price, so I’m assuming they’re planning to introduce some more merchandise or make room for more Star Wars/Muppet figures in the future. The official Disney Parks Muppets figure set can’t be found here either, but can be found in the Journey Into Imagination with Figment store in Epcot, strangely enough. If you want my opinion, you should buy the Muppets Most Wanted set instead, since it features the same figures plus Walter, Constantine and a new Piggy.

I also spotted this ad right across and in between Pixar Place and One Man’s Dream. Great advertising!

I guess that’s it for your Muppety tour around Disney’s Hollywood Studios! If you happen to know of a location that I left out in this list, let us know in an email to muppetmindset@gmail.com and we’ll feature it in the article!

Have fun on your next visit!

Check out Mitchell’s article on our sister site The Mickey Mindset for a look at Roger Rabbit in the Disney Parks!