1.   Who are your three favorite characters from The Muppet Show, Muppets Tonight, The Jim Henson Hour, the Muppet movies, etc. and why?
Kermit, because he’s the glue that holds all the Muppets together, and just plain awesome! Gonzo, because his craziness relates to me. He is always doing something outside of the norm, and I feel like I do the same. Lastly, Sweetums, because he is this big ferocious looking monster, but on the inside he is just a big loveable lump of fur. And not to mention all of his great moments with Robin. (We need more of those, Disney!)

2.   Who are your three favorite characters from Sesame Street and why? 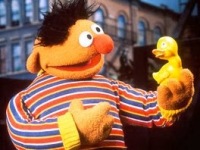 Ernie, because he is a load of fun, always trying to get Bert to have fun. “Rubber Duckie” is one of my favorite Sesame Street songs, and it shows how Jim had a great singing voice. Grover, because he seems like he would be fun to spend an afternoon with. He’s always doing something crazy, and he would make any day great! Finally, Big Bird because he is wise beyond his years. I mean, he’s only six, and deals with problems adults struggle with! 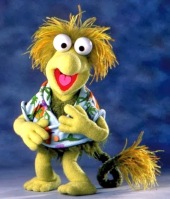 3.   Who are your three favorite characters from Fraggle Rock and why?
Wembley, because he is funny and reminds me of myself, always indecisive. Cantus, because I feel he is one of Jim’s better characters. Cantus is almost like the Fraggle form of Jim, always wise and knowing what to do. I also love Boober, a great Dave Goelz character. Boober balanced the happiness levels of the show. He is such a worry-wart, being scared of the silliest things!

4.   What is your favorite television program starring any of Jim Henson’s creations (e.g. The Muppet Show, Sesame Street, Fraggle Rock, Dinosaurs, etc.) and why?
Although I REALLY love The Muppet Show, I’m going to have to go with Dinosaurs on this one. I love how it is a metaphor for the current society and all of their wrong doings. It tackled some pretty edgy subjects for being a family show. And also, who doesn’t love Baby?

5.   What is your favorite Muppet movie and why?
My favorite has to be The Muppet Movie. It’s how the Muppets came to be. I also see it as a time when The Muppets were becoming true superstars, and Jim’s hard work had paid off. It really set the stage for future Muppet productions. The soundtrack is brilliant from start to finish. Some of my favorite Muppet songs are featured in the movie.

Like pretty much everyone on here, my favorite is “The Rainbow Connection.” It is a lovely tribute to Jim, and Kermit’s theme song. It is such a great ballad, and can make any glum day bright.

7.   If you could have dinner with any living Muppet performer who would you choose and why?
Hmmm… this is tough. I think I’d have to choose Bill Barretta. I’d really like to talk to him about his work on Dinosaurs. He has some truly memorable characters like Pepe, and took on the role of many of Jim’s characters. I would want to know how it feels to play such great characters, and how it felt to be in Jim’s shoes.

8.   If you could tell Jim Henson one thing, what would it be?
I’d want to let him know how appreciative I am of his work, and how he inspired millions of people worldwide with his work. I’d like to tell him how he inspired me to be a puppeteer, and to strive for your dreams, no matter how crazy they seem.

9.   If the President called you and asked to discuss Muppet projects, what would you tell him was the “Greatest Muppet Moment of All Time”?
Probably when Walter passes out when he meets Kermit for the first time. I think that pretty much sums up how every Muppet fan would be in that circumstance. 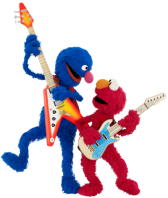 11.   If a judge ruled that Grover had to be your personal assistant for a month, what jobs would you have him do?
I ask him to be in a band with me, see what happens. Hopefully he wouldn’t get into too much trouble… guitars are expensive!

12.   In your opinion, what is the worst Muppet production ever made?
I like all of the Muppet productions. None of them are BAD per say, but the one I watch least is probably The Muppet Christmas Carol. I’m not sure, I just think it has to do with the fact that it doesn’t feature enough Muppets in it. I think J.P. Grosse should have played a good Scrooge. It truly is a beautiful story though.

13.   Who is one celebrity you would love to see cameo in the next Muppet movie?
Probably Jimmy Fallon. I mean, look at him! He’s a HUGE Muppet fan! I’m surprised he hasn’t been in anything yet!

14.   If you could take a picture with any Muppet, who would you choose and how would you pose?
I think I’d like to have my picture taken with Walter. We would both be having fan-attacks and be freaking out.

15.   What is your favorite piece of Muppet merchandise that you own? (Feel free to include a picture!)
I’m going to have to give my THREE favorite Muppet items. One, my Master Replicas Kermit, Two, my Master Replicas Gonzo, and Three, my Of Muppets And Men book. That thing is SUPER rare! 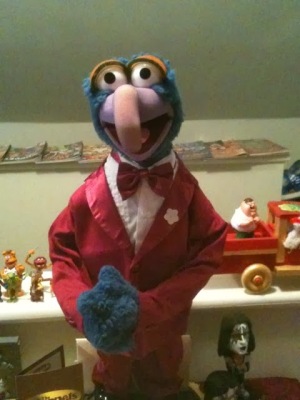 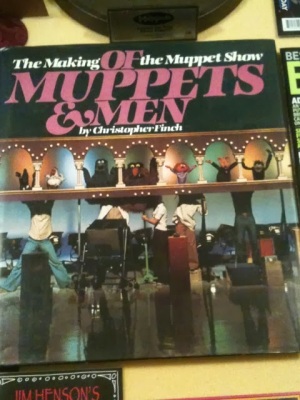 One thought on “The Great Muppet Survey – Casey Daron”