NEWS UPDATE: June 21, 2013
This week Disney Mobile released a brand new iPhone application called “My Muppets Show” which features a virtual Muppet Show with unlockable characters and props. Unfortunately, and immensely frustratingly, the app is currently only available in Australia. The Facebook fan page for the app suggests that it will be released wider soon… so cross your fingers, Muppet fans. Thanks to our friend Zac Parker, we have some exclusive screenshots from the app, so check them out below! 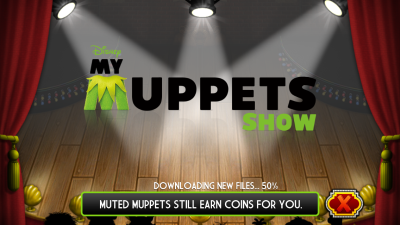 As we reported last weekend, the 40th Daytime Emmy Awards were held and Sesame Street won a lot of shiny statues. But a meaningful piece of news came after viewers had time to upload the ceremony to YouTube, including the In Memoriam segment, which featured both Sesame Street director/writer Emily Squires but also Muppeteer Jerry Nelson. Watch the video below for the full segment (which starts at 3:10).

I don’t know if we’ve mentioned it on the site before… but our friend Brian Jay Jones is in the finishing stages of his new, all-encompassing book Jim Henson: The Biography, which will be released on Jim’s birthday, September 24th. The book already has a lot of buzz around the internet including a newly released blurb from none other than Frank Oz, who had this to say about the book: “I worked with Jim for over thirty years.  He was one of my closest friends. And yet I found out things about him in Jim Henson that were new to me.  Brian Jay Jones has captured the layers of Jim’s genius and humanity as well as the flaws that made Jim, like all of us, so delightfully imperfect. Jim needed this book to be written. I thank Brian for giving Jim life again. This book has captured the spirit of Jim Henson.” You can pre-order the book on Amazon now, and check out the awesome cover art to the right!

Finally, we now have confirmation that The Muppet Movie Original Soundtrack will be re-released in conjunction with the film on Blu-ray on August 13th by Walt Disney Records. Still no cover art or track information (though we can probably guess the latter with some accuracy). However, you can pre-order the soundtrack on Amazon.com and check out the announcement from our friends at StitchKingdom.com for some more information about the re-release.