Ryan Dosier – May 16th should just be declared Jim Henson Day, right? Write your Congressman. But really, today is the day I always sit back and stop to remember and appreciate the magic, wonder, and genius that was Jim Henson. Over the years on The Muppet Mindset our articles on May 16th have always been more solemn. But any good Muppet fan knows that balancing the solemn with the silly was Jim’s forte, so it seems appropriate that we try to strike that balance as well. Thus, I present My Favorite (Silly and Solemn) Jim Henson Moments.

One of the few Fraggle Rock episodes that featured Jim is perhaps my favorite episode of the show. This is definitely an example of Jim’s silly side. It’s pretty hard to find something that Jim did that is sillier than the Fritz roll call, the nonsense song “Turn Your Buttons Down,” or any of the many, many strange and goofy things that the Poohbahs do. This episode defines silly for Fraggle Rock and for Jim as well.
“I Don’t Want to Live on the Moon” from Sesame Street 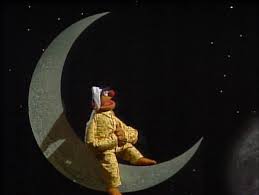 Many of Jim’s characters were focused on one side of the duality spectrum: either solemn or silly. Cantus: solemn. Guy Smiley: silly. Swedish Chef: solemn (think about it). But then there’s Ernie, one of those rare characters of Jim’s who could effortlessly slip between the solemn and the silly–much like Kermit. “I Don’t Want to Live on the Moon” is Ernie’s best solemn moment, hands down. Jim delivers such a beautiful song, but the visuals presented are equally touching. Ernie’s full-body form is so engaging as he swims, dances on the moon, and more. You can tell that Jim put a lot of love into this one.
“Mack the Knife” from The Muppet Show

How could I make a list like this and not include a moment of Jim Henson/Frank Oz bliss? But how do you choose between Kermit and Piggy, Kermit and Fozzie, Kermit and Grover, Kermit and Cookie Monster, Rowlf and Fozzie, or Ernie and Bert? By going completely against the grain, of course! That’s why I chose to mention “Mack the Knife,” this hilarious song from The Muppet Show performed by Dr. Teeth and interrupted by Sam Eagle. Sam is against the “gore and violence” inherently present in the song… until Dr. Teeth sways him as only the good doctor can. He even convinces Sam that some of the song is “Cockney rhyming slang!” Amazing. A true Jim and Frank golden moment.
“You and I and George” from The Muppet Show
It’s so hard to pick a favorite Rowlf moment or song. He sang so many gems on The Muppet Show, but every time I think about it my favorite is always “You and I and George.” The song is so fitting for Rowlf. It’s simple, surprising, and hysterical. How can you not love Rowlf bemoaning, “My own mother turns down her hearing aid when I sing this song”? Absolutely my favorite.
Kermit’s “Boffo” Pitch in The Muppets Take Manhattan
Kermit really got to stretch his acting legs for the first time in The Muppets Take Manhattan, and if you watch the wonderful interviews with Jim Henson on the DVD/Blu-ray, you’ll know that Jim loved that about the movie. You can tell just how much fun Jim was having when Kermit comes into a Broadway producer’s office with a pink suit and an afro acting like a Hollywood hotshot. It’s so not Kermit but so wonderfully crazy and Jim-like. Remember, “Boffo, Lenny! Socko, Lenny!”
Cantus in “The Bells of Fraggle Rock”
“I should’ve brought my mittens.” ‘Nuff said.
“Here, fishy, fishy, fishy!!” from Sesame Street
My favorite Ernie and Bert sketch takes the dynamic duo fishing. And, of course, Ernie takes it to a crazy new level. He doesn’t use a fishing pole, and instead just shouts (hysterically), “Heeeeeeere fishy, fishy, fishy!!!” And lo and behold, it works as a bunch of fish simply jump into the boat! Bert is so amazed by this trick that he decides to try it himself… and of course it doesn’t work. He keeps trying, and eventually a shark jumps into the boat–a shark that laughs just like Ernie. Talk about your bad luck, Bert.
Anything with Guy Smiley on Sesame Street
One of Jim’s under-appreciated characters is the outrageous, unrestrained, “Everybody’s favorite game show host” Guy Smiley. As Guy Smiley, Jim was able to be totally ridiculous while the other Muppeteers had to play idiotic or confused game show hosts. Jim took complete charge with Guy Smiley and won every sketch he was in. From “Beat the Time” with Cookie Monster or The Count or Grover to any of the other wonderful game shows, Jim made Guy Smiley a joy to watch every time he was on screen.
The Swedish Chef in A Muppet Family Christmas
How can you not love The Swedish Chef in this special? He goes from a maniacal bird killer to a lonely foreigner who just needs a hug in the course of one short Christmas carol. The Chef has to put up with a fast-talking turkey who convinces him to cook Big Bird for Christmas dinner. Obviously, the Swedish Chef goes nuts when he sees the 8-foot-two-inch canary. But Big Bird tenderizes the Chef’s heart with a sweet duet of “The Christmas Song” (“Chestnuts roasting on the open fire…”). The Chef makes a quick change to the menu, now serving shredded wheat and cranberry sauce–my absolute favorite!!
There are so many more wonderful Jim Henson moments that we could discuss… and I just realized that most of these were examples of the silly side of Jim rather than the solemn. So let’s all take a moment to turn on “Rainbow Connection” and reflect on what Jim means to us and to the world.
Thanks, Jim.
Apologies for the lack of pictures. I’m on the road and there’s no Wi-fi!
The Muppet Mindset by Ryan Dosier, muppetmindset@gmail.com