Shane Keating – So, Season 43 of Sesame Street has wrapped, and to make up for the lack of weekly reviews this year, here’s a season-long recap on what’s new on the street and what I thought of it. Let’s start off with the biggest event of the season…

Anything that replaces “Elmo’s World” can’t be all that bad. And by jingle, this segment is fantastic. Every time I’d watch an older episode, whenever Elmo’s World came on, I was basically like, “Welp, I can change the channel now.” But “Elmo the Musical”? That’s a segment worth sitting through multiple times. As Ryan stated before in his review of the segment, there’s a broader appeal to the segment; it’s clearly not geared toward the pre-preschool-crowd as Elmo’s World was, making it all the more entertaining to all ages. The animations and backgrounds look beautiful, and the songs are fantastic, mostly due to the great composers they have and the natural talent of the Muppeteers. I can’t pick a favorite segment, but here’s my top picks for the songs, in no particular order:

1.   The Theme Song – As much as I like “Elmo’s Song,” this makes for a much more entertaining theme tune. It establishes the tone of the segment really well, it’s catchy and it’s got a chicken chorus. What more could you want?
2.   “A Game That Two Can Play” (President the Musical): Seriously, Stephanie D’Abruzzo needs to put out an album. Her vocals on this song are insanely good and the actual music track rocks.
3.   “Space Chicken Song” (Pizza the Musical): I think this is the only segment they have now that has clear villains in them, and if there’s one thing a villain needs in a musical, it’s a song. And this one is great sounding. Plus, it’s a chicken dressed as Darth Vader in an egg-shaped Death Star, which is every bit as awesome as it sounds.
4.   “Athletes, Athletes/Golden Shoes” (Athlete the Musical): The first song lasts literally 26 seconds, but it’s one of the songs I most enjoy for some reason. It’s probably the great beat and vocals by Stephanie, Leslie, and John. It then quickly blends into Elmo’s “Golden Shoes,” which provides some of the funniest moments of the segment.
5.   “Keep on Clucking” (Circus the Musical): I’m not sure why they got Audra McDonald to record singing vocals for this when they had already-Broadway-singer Stephanie on deck, but she’s really good and the song purely exemplifies the Sesame Street teaching method: an important lesson (persevering) told in a Muppety way (putting it in a chicken’s perspective).

The season continues the STEM (Science, Technology, Engineering, and Math) curriculum, but adds an “A” for the Arts. From what I’ve read, the first half of Street Stories were filmed during Season 42, and the latter half filmed during season 44’s production. Why? Beats me. But, the episodes from the first half of the season don’t focus on the STEAM stuff, which was neat because we’d get more character based stories instead of the constant “trial-and-error” material. I mean, “Build a Better Basket” and “The Best House of the Year” were essentially the same exact story (Tim Gunn appearance excluded). The latter-half season stuff also seems to be shot a different frame rate, but who else pays attention to those things? But, there were still a lot of great stories this season. Top five picks:

1.   Get Lost Mr. Chips – Two great performances by a David in this episode: Rudman as Cookie Monster and Hyde Pierce as Commander Chiphead. Everything in this story is great: the set decoration, the lighting, the jokes, the score.
2.   Brandeis is Looking for a Job – John Tartaglia hasn’t done any Sesame material since season 39 and he does great with Brandeis. And again, amidst the science curriculum, it’s great that they found a place for a story about as interesting a topic as service dogs. They should bring back Brandeis on occasion, or at least find other uses for the puppet; it’s great lookin’ one and it’d be a waste to not use it again.
3.   The Good Sport – Elmo’s at his best when he’s a three-dimensional character and not just talking about how birthday cakes can’t answer telephones or eat bananas. I actually got a sappy smile when Elmo admitted he was wrong for being cocky at hot potato; that’s the power of this character, the writers, and the terrific performers. Also, “Eye of the Potato” is a spoof I don’t know why no one’s ever done before.
4.   Trashgiving Day – I believe the Fraggle writers had a motto that when in doubt, make up a holiday to base an episode around. That seems the same of the Sesame writers, especially when it comes to the Grouch culture. This is a very funny story, as most Oscar ones are. The punchline for Alan and Chris’s suffering is also perfect. (“Next year, I’m taking Trashgiving Day off!”)
5.   Figure It Out Baby – Donald Glover. ‘Nuff said.

It wouldn’t be Sesame Street with lots and lots new songs. Now, I’m really into upbeat, catchy songs. And the show’s recently gone on a “funk” kick, making a majority of their songs sounding that way. And I love it. We’ve got so many great songs this season, many courtesy of the fantastic Elmo the Musical. There’s very few that I didn’t care for. (Like Murray’s rap of “The People in Your Neighborhood.”Yeah, um, no.) My top five picks (again, in no particular order):

1.   “Me Am What Me Am”: This is should go down as one of Cookie’s best songs; the only thing that could prevent that would be it serving a story-specific purpose, so it loses the stand-alone quality, say, “Me Gotta Be Blue” has.
2.   “Five By”: Sesame parodies always sound better than the originals to me, and this is definitely one of ’em. Plus, it’s the last Jerry Nelson song we’ll be getting (as far as we know), so it has that sentimental value. The lighting’s awesome too, but I’m sure you were all thinking the same thing.
3.   “Two is You and Me”: A great, funky cover of the Joe Raposo classic.
4.   “Belly Breathe”: This follows the “Celebrities singing a song about feelings in front of a white background” trend set by “What I Am” a couple of years ago, but I really enjoy it. And that Mad-Monster-Elmo is a cool-lookin’ puppet.
5.   “I Am Special”: When was the last Frank Oz song we got? This fits in with all the classic bits with just a character and colored background, and it’s a pretty good, classic-feeling song. Plus, how can you not love Grover’s little dance at the end of the bridge? 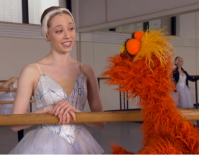 Since season 43 was filmed alongside two different seasons, they didn’t really film too many new Muppet inserts. We got a few, some of which were taped during season 42, and some others filmed early last year, which were mainly just the traditional spoof inserts. We got some neat new tune-in segments with Murray and Ovejita, but I would’ve liked to see some variety in how they were done (there were a few too many versions of their Alphabet Cookoff bit). There was also Murray’s “People in Your Neighborhood” tune-ins, where he’d visit New Yorkers with jobs one wouldn’t typically think of (paleontologist, conductor, kinetic artist). These were great bits, but again, his rap cover of the original song is every bit as inadequate as it sounds. We got a few new editions of Abby’s Flying Fairy School and Super Grover 2.0, which were holdovers from the previous season. 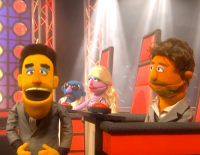 The spoof segments were really great this season, like “The Voice,” “Birdwalk Empire,” and “Upsidedownton Abbey.” The best thing? The latter two had characters by the always-fantastic Frank Oz. We also got two other segments with him as Grover: a great new Grover/Mr. Johnson piece and “I Am Special.” I really hope he’s a part of season 44 this fall.

We also finally got a BRAND NEW Ernie and Bert sketch this season! They’ve done a lot for the international co-productions, but none of them have aired here yet and the last new segment we got starring the two was in season 37 (“I Wonder” from season 41 excluded). It’s a shame they didn’t air more, because I know that a couple more bits were taped on the same day as this one. There’s also about a dozen more taped for an international mini-series, “Monstruos Supersanos” that debuted last year. All the segments don’t take place in their apartment, which is a shame, but it makes the segments more universal for international airings, so I suppose I can deal with it. We also got a new Two-Headed Monster bit and some neat song covers by Elmo and Abby.

Then there’s the Word of the Day bits. The majority of these are shot in LA in the spring, and they only have Kevin, Leslie, Matt, and Joey over there, so the options are limited for characters (mostly Elmo and Abby, and occasionally Murray), whereas the ones shot at their home base include characters like Big Bird and Cookie Monster, who make for much more entertaining segments. For the most part, they’re pretty hit or miss, but ones like “Reinforce” and “Vibrate” really sell it when it comes to the character-based comedy.

We also got a bunch of neat new film and animated segments. Some standouts include the animated “Quiet or Loud,” Bubba’s S word sale, a remake of the classic “Loaf of bread, container of milk and stick of butter” and a remake of the 1997 song, “Count Me In,” which I kinda enjoy more than the original.

As for top picks:

1.   The Voice: Much of the humor from the spoofs recently seems to be derived from the sheer fact that it’s a parody. However, this is has some great, classic Muppet humor, from the juxtaposition between the contestants and their acts to the running gag of the host getting continuously whammed by the rotating chairs.
2.   The Coffee Plant: The aforementioned new Grover/Mr. Johnson bit. The celebrities and spoofs may be a part of how Sesame stays current, but that notion also bleeds into other bits, where a modern, Starbucks-esque coffee shop makes for the perfect place for Mr. Johnson to have another unfortunate, yet hilarious run-in with Grover.
3.   Two-Headed Monster – Milk: I’m not so keen on the way their new segments have been using Chris for a narrator (they don’t really need one). This one thankfully doesn’t have him and it’s a sketch that Jerry and Richard totally would’ve done.
4.   Word of the Day: Remember – I recently got into “Modern Family,” so I finally know who Eric Stonestreet is. But, this segment perfectly references the classic “Loaf of bread, container of milk, stick of butter” cartoon, right down to the music track. The only downside: it was followed by the remake of the cartoon, which pretty much dilutes the joke.
5.   Upsidedowton Abbey: Another great Frank Oz sketch, who is perfectly deadpan at the butler. Fran Brill is also great as the countess and the background has got some nice in-jokes.

So, that was season 43! It was an overall good season, with some memorable stories and songs. Plus, we got “Elmo the Musical,” which is fantastic and I hope it sticks for as long as possible. As Murray would say, “See you next time on the street. PEACE!”