1.   Who are your three favorite characters from The Muppet Show, Muppets Tonight, The Jim Henson Hour, the Muppet movies, etc. and why?
This is a difficult question, as I love all the Muppets, but I’d have to say… Gonzo’s number one, because he is so funny and silly and I admire his sheer determination to make art out of just about everything. Second is Rizzo, because I love his sarcasm (and him and Gonzo make such a great duo). And lastly is Sam the Eagle because, come on, Sam’s awesome.

2.   Who are your three favorite characters from Sesame Street and why?
Telly’s always been my favorite. He’s so paranoid and worried, but he’s also a sweetheart and I just want to give him a hug. Then I’d say Grover, because he is the cutest little blue furry monster ever. Lastly, I’d say Bert, probably for the same reasons I love Sam the Eagle so much. I love grouchy Muppets!

3.   Who are your three favorite characters from Fraggle Rock and why?
Wembley, because he loves his friends so much and he’s just the sweetest. Then probably Boober, because I found his dreary outlook on life endearing. Then Uncle Traveling Matt, for his zany postcards.

4.   What is your favorite television program starring any of Jim Henson’s creations (e.g. The Muppet Show, Sesame Street, Fraggle Rock, Dinosaurs, etc.) and why?
Oh, The Muppet Show. Hands down. You can’t beat The Muppet Show. There are just so many wonderful episodes, hilarious gags, memorable songs, and lovely moments on that show. Definitely the best thing Jim ever created.

5.   What is your favorite Muppet movie and why?
It’s The Great Muppet Caper for me. It has such a wonderful soundtrack, and there are so many moments in the film that make me crack up (Gonzo throwing himself in front of the taxi, Fozzie and Kermit being identical twins, John Cleese’s whole bit with Miss Piggy, etc.). I think it’s fair to say The Muppet Movie is probably the best of all the Muppet films, but Great Muppet Caper will always be my favorite.

6.   What is your favorite Muppet/Sesame/Fraggle song and why?
Such a tricky one, there are far too many wonderful Muppet songs. But again, I’ll side with you and say “I’m Going To Go Back There Someday”. It’s such a sweet moment in The Muppet Movie, and I love any moment when we get to see Gonzo’s more sensitive side (such as him singing “My Way” and “The Wishing Song” on The Muppet Show).

8.   If you could tell Jim Henson one thing, what would it be?
No words. I’d just hug him (and probably cry). He’s given us so much, I don’t think I could ever find the words to express that.

9.   If the President called you and asked to discuss Muppet projects, what would you tell him was the “Greatest Muppet Moment of All Time”?
Honestly, Mr. President, you can’t get much better than the “good grief, the comedian’s a bear” gag. 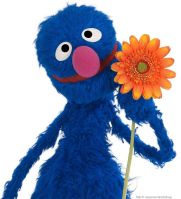 11.   If a judge ruled that Grover had to be your personal assistant for a month, what jobs would you have him do?
I don’t know if I’d give him any tasks. I’d probably just have him follow me around and, when I’m having a bad, let me give him hugs.

12.   In your opinion, what is the worst Muppet production ever made?
The Muppets’ Wizard of Oz. I feel like I don’t need to elaborate and that everyone’s on the same page.

13.   Who is one celebrity you would love to see cameo in the next Muppet movie?
Amy Poehler, please!

14.   If you could take a picture with any Muppet, who would you choose and how would you pose?
Sweetums! I’d sit on his shoulders.

15.   What is your favorite piece of Muppet merchandise that you own? (Feel free to include a picture!)
A Big Bird feather that a friend nabbed for me when she was interning for Sesame Street.

One thought on “The Great Muppet Survey – Julia Gaskill”