Ryan Dosier – We’re back and after this post we’ll be halfway through our countdown of 120 Awesome Muppet Songs! Don’t miss Part 1, Part 2, and Part 3 before jumping in today. Remember that these songs are presented in completely random order chosen by iTunes shuffle. Who’s ready to jam?!

46.   “There’s No Business Like Show Business“ from The Muppet Show
This classic of the Broadway stage has been co-opted by the Muppets. The Muppets first performed the number with Ethel Merman on The Muppet Show and it is still the best version they’ve done. Merman’s vocals hammer the song home. The song would later be used to open The Muppets: A Celebration of 30 Years and during The Muppet Show Live. It’s one of the best numbers of The Muppet Show Season 1 and it speaks to the great joy the Muppets find when performing. Favorite lyrics: “There’s no business like show business/Like no business I know/Everything about it is appealing/Everything the traffic will allow/Nowhere could you get that happy feeling/When you are stealing that extra bow.”

7.   “Baby Face” from The Muppet Show
This is perhaps the only song I ever need to listen to for the rest of my life. The Muppeteers clucking this classic song as chickens for two minutes is pretty much the best thing I can think of. The idea behind this song is pure genius and the execution is undeniably perfect. When it was performed by the Muppeteers at Jim Henson’s Memorial it provided a laugh in a somber world–something Jim would’ve loved. Favorite lyrics: “Bawk buck baw/Buck buck buck buck buck buck buck/Bawk buck baw!”

48.   “Let Me Be Your Song“ from Fraggle Rock
One of Jim Henson’s greatest characters was Cantus the Minstrel, Fraggle Rock‘s wandering bard. Cantus could hit deep, powerful ideas in his words and especially in his music. Nowhere is this more true than Cantus’s quintessential song. This is absolutely one of the best songs from the entire run of Fraggle Rock and you could tell that Jim already loved this character. It’s a magnificent number and me saying more about it really just distracts from the beauty of the music and the power of the lyrics. Favorite lyrics: “Everything seems to sing, everywhere I go/I say one, two, play me do/Let me sound as sweet as you/Play me wide, play me long/Let me be your song.” 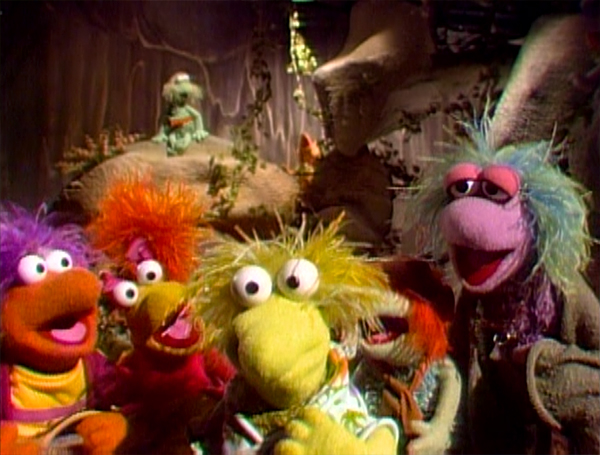 orkin’“ from Fraggle Rock
One of the first of many many songs written for Fraggle Rock, “Workin'” tells you everything you need to know about the Fraggle Five and even about Fraggles as a whole. The idea of only working for 30 minutes every week? Hilarious. The extended album version of the song available on the album “Perfect Harmony” features some amazing saxophone work. But the best part about this song is the great vocals from the Fraggles and the rockin’ tune. Favorite lyrics: “The work I think I’ll work at/Unless I think I won’t…/It’s sort of something that you do/Unless you maybe don’t?”

50.   “Ain’t No Road Too Long“ from Follow That Bird
One of my favorite moments from one of my favorite movies is this magical number from Follow That Bird. Country singer Waylon Jennings gives Big Bird a ride in his chicken truck and sings this inspirational song. They’re joined by Gordon, Olivia, Cookie Monster, the Count, and Super Grover as well. It’s bouncy and fun and it reminds you to always keep going. It’s one of the most uplifting numbers Sesame has ever produced. Favorite lyrics: “Don’t look back, don’t’cha turn around/Just keep your eye on where you’re bound/And you’re bound to get from here to there/’Cause the dream can take you anywhere.”

51.   “Jamboree“ from The Muppet Show
After Gonzo performed this song, Statler and Waldorf responded “I’ve seen wars started over less than that.” “Wrong, there’s nothing less than that!” I disagree with the old coots, because this is one of Gonzo’s greatest numbers. It is absolutely bizarre, with lyrics inviting rats in balloons and penguins throwing popcorn, and chickens on a well-dressed moose. But honestly, it is just perfect Gonzo the Great. Trivia: This song was written by Frank Oz. Favorite lyrics: “Well you go run from thunder/And you stay away from rain/But I’ll be looking at the color in the puddles/To see my Jamboree!”

52.   “Dum of a Son of a Gun“ from Fraggle Rock
It’s a real shame that Pa Gorg didn’t get to sing more on Fraggle Rock. I’m sure the rough voice was hard on Jerry Nelson, but Pa is so much fun when he sings. This is probably his trademark song (or “I’m Not Scared of Anything at All”) and it’s perfectly Pa. He bemoans the idiocy of Junior while poor Junior is behind him dancing and nonsensically singing along! It’s a wonderfully fun little ditty with some great lyric work as well. Favorite lyrics: “It’s bad enough ya huff and puff/To make the kingdom run/And worse, I curse the wretched universe/That brought a witless wonder blunder dummy of a son!”

53.   “Garden Song“ from The Muppet Show Music Album
John Denver may have performed this on The Muppet Show (see video), but my favorite versions are from The Muppet Show Music Album or Ol’ Brown Ears is Back. How fitting that the gem is performed by Jim. Both Kermit and Rowlf’s versions are fantastic, but Kermit’s is slightly better, in my opinion. Maybe it’s because I can picture tending a garden much more vividly than I can Rowlf. This song is all about sewing seeds and tending plants but the metaphor is so much more. Favorite lyrics: “Plant your rows straight and long/Temper them with prayer and song/Mother Earth will make you strong/If you give her love and care.”

54.   “Sesame Street Theme” from Sesame Street
I don’t think that any explanation for this entry is needed, is it? Both the Sesame theme and The Muppet Show theme are present in the list this week, and it is so impossibly hard to choose the superior song. I think, lyrically, the Sesame Street Theme has the edge. The lyrics transport listeners to another world with their earnest ideals and beautiful words. It’s so simple but so impossibly brilliant. Favorite lyrics: “Sunny days, sweepin’ the clouds away/On my way to where the air is sweet/Can you tell me how to get/How to get to Sesame Street?/Come and play, everything’s a-okay/Friendly neighbors there, that’s where we meet!”

55.   “Happiness Hotel“ from The Great Muppet Caper
This is one of my top five favorite Muppet songs (I think… it changes all the time). Joe Raposo proved himself a master at Muppet mayhem with this ditty featuring lines from every major character in the movie (minus Miss Piggy). Scooter sings, Rowlf sings, rats tap dance and harmonize, Pops is great, and the Electric Mayhem has never rocked harder. You really can’t beat the fun and snappiness brought out by this song. It’s a big reason of why The Great Muppet Caper is my favorite Muppet movie. I absolutely love it. Favorite lyrics: “Okay, the lobby’s lookin’ shabby/And it’s got the wrong address/And the whole dang thing/Has been condemned by American Express/The management is cheerful/Though the whole joint’s gone to hell/Well welcome home/To Happiness Hotel!”

56.   “Movin’ Right Along“ from The Muppet Movie
Well what do you know… another of my top five favorite Muppet songs! This classic duet between Kermit and Fozzie is both hilarious and joyful. The frog and the bear deserve more duets purely based on this Paul Williams/Kenny Ascher classic. It’s the perfect road trip song, the perfect Kermit/Fozzie song, and a true highlight of The Muppet Movie. Honestly, if you don’t picture a giant fork anytime someone says “Left at the fork in the road,” I worry about you. I really can’t say enough about this perfect song. Favorite lyrics: “Movin’ right along/We’ve found a life on the highway/And your way is my way/So trust my navigation/California, here we come/The pie in the sky land/Palm trees and warm sand/Though sadly we just left Rhode Island…”

57.   “The Muppet Show Theme“ from The Muppet Show
The greatest opening ever for the greatest television show ever? Perhaps. Like I said, it’s hard for me to choose between this and the Sesame Street Theme. The Muppet Show Theme is absolutely amazing because of how well it opens a show–any show, really. It’s bouncy and energetic and goofy and totally Muppety. It becomes a truly awesome Muppet song when it is paired with the visuals. The arches and the dancing Muppets and Kermit’s introduction… sheer perfection. Who didn’t go nuts when they remade the opening for The Muppets? Favorite lyrics: “It’s time to play the music/It’s time to light the lights/It’s time to meet the Muppets on The Muppet Show tonight!” 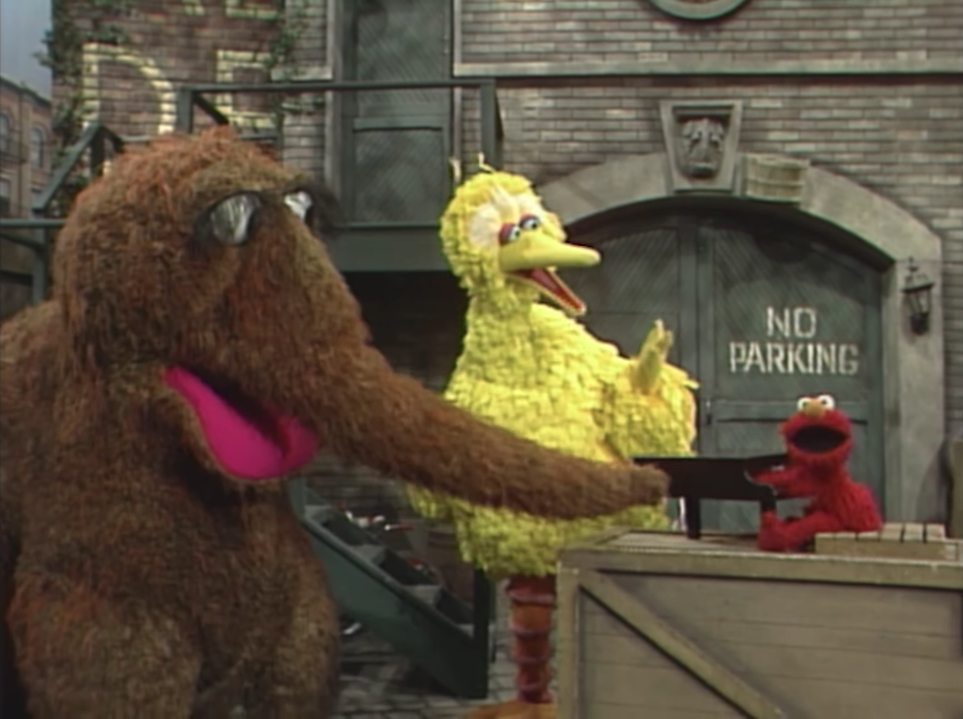 58.   “Elmo’s Song“ from Sesame Street
Cute, adorable, hinging on annoying–all of these are words that describe both Elmo and “Elmo’s Song.” The video for the song, featuring Elmo on the tiniest piano ever, is absolutely adorable. Elmo is joined by Big Bird and Snuffy, who revamp the lyrics to fit their names. But more than anything, this is Elmo’s anthem. It’s not just a silly little song for a three and a half year old, it’s something Elmo is proud of as well. Just listen to my favorite lyrics: “Elmo wrote the music/Elmo wrote the words/That’s Elmo’s song!”

59.   “Sing“ from Sesame Street
Boy… a lot of amazing, classic songs on the list this week. At last count, I had 15 versions of “Sing” in my iTunes library–and I love every single one of them. My favorites? Either the version sung at the end of Sesame Street: 20 and Still Counting or at the end of Sesame Street’s 25th Anniversary: A Musical Celebration. Both incorporate the whole cast, which I love, and both incorporate the rarely heard extended lyrics, which I also adore and happen to be my favorite lyrics. This song is pure beauty, pure optimism, and pure joy–everything singing should be. It’s amazing that something this beautiful and wonderful could come from a kid’s TV show (but, let’s face it, I say that a lot about Sesame Street). Favorite lyrics: “Sing of love there could be/Sing for you and for me/Sing, sing a song/Make it simple/To last your whole life long/Don’t worry that it’s not good enough/For anyone else to hear/Just sing… sing a song!”

60.   “Jingle Bell Rock” from A Muppet Family Christmas
Hey, man! What a rockin’ number to finish with! Not only is this the best version of this song ever (don’t argue, just accept it), it’s also one of the Electric Mayhem’s greatest numbers. It features Lips, which is always a plus for his awesome trumpet solos, and Dr. Teeth, Floyd, Janice, and Animal all get awesome moments. I also love the adorable, soft moment of Kermit and Robin singing “Jingle Bells” before the Mayhem so awesomely interrupts. How this is not the quintessential version of “Jingle Bell Rock” that plays everywhere every Christmas, I’ll never know. Favorite lyrics: “Jingle bells chime in jingle bell time/Dancin’ and prancin’ in jingle bell square/In the frosty air!/What a bright time/It’s the right time/To rock the night away!”

That’s it for this week! Tune in next time for 15 more of our favorite 120 Awesome Muppet Songs!