Michael Wermuth, Jr. – The Muppet Retro Reviews article series is among my favorite Muppet Mindset articles (along with Weekly Muppet Wednesday and The Great Muppet Survey), but one thing I’ve noticed about the article series is that, as of this writing, all of the reviews have been positive. Well, I’m gonna attempt to change that. So today I’ll review one of my least-favorite Muppet specials, Rocky Mountain Holiday. It’s not a bad special, but it’s also one of my least-favorite pre-1990 Muppet productions. It was only broadcast once, in 1983, and when it was first released on DVD ten years ago, I was happy to have this once-rare special, and yet all of the problems I have with it now I had even back then. 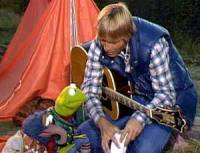 Anyway, Rocky Mountain Holiday is the second of two “John Denver and the Muppets” specials. This one doesn’t have much of a plot, which can be summed up in one sentence: John Denver takes the Muppets on a comping trip to the rocky mountains, and they sing many songs. There are a few other running gags and “plot” points–Statler and Waldorf also camp out in the Rockies and observe the Muppets, Fozzie has trouble interacting with nature, and there’s a nice bit where John gets mad at Robin for only setting up the clothesline as high as John’s ankles, causing him to trip, but then apologizes because that’s as high as Robin could reach. But most of the special is singing, with a number of flashbacks thrown in. The second half takes place at nighttime, where they sing more campfire songs, and John tells a story about a giant man-eating chicken, and then becomes surprised when he learns that the giant man-eating chicken is real.

I’ll talk about what I dislike about this special first, before I get to what I like. First of all, the special kinda drags a bit after the first 15 minutes or so. While John Denver is a good singer, he gets a few solo numbers which are hard to sit through, made even more hard to appreciate when his singing plays over wildlife footage. Some moments feel a bit awkward, such as when (after being there for at least half an hour) the gang suddenly notices bad odor from a letter Miss Piggy had given Fozzie to give John, only for John to have Kermit read the letter, which concerns a previous camping trip Kermit didn’t know about, with some suspiciously romantic language, and ends with Piggy asking John not to let Kermit read (too late!). That’s just… a really awkward scene.

Another thing I don’t like is the small group of characters. John only brings a small amount of major and secondary characters (and Rizzo, who was a minor character at the time) on the trip. Specials don’t really need a lot of characters to be great, but many of my favorite specials have a lot of characters, major and minor. It would have been great to have seen Bunsen, Beaker, Link, Sam, Beauregard, Sweetums, Lew Zealand, and The Swedish Chef on this trip, and I feel they would have all fit in with the camp setting. I especially wish that the whole Electric Mayhem would have gone on the trip. Floyd, Janice, and Animal are the only members who go on the trip, though for some reason Zoot makes a random appearance playing the saxophone at one point (though it is one of the specials best scenes). It would have been great if Dr. Teeth joined them, and of course I really wish Lips was in this special. I’m not bothered by the fact that Miss Piggy only appeared in a couple of flashbacks, though, as she was never one of my favorites (though I appreciate her better now), and I am glad that Lubbock Lou and His Jughuggers made a cameo.

And now it’s time for what I liked about this special. Well, I like the first fifteen or so minutes, which contains four great numbers, which all belong on a comprehensive collection of Muppet music (if one ever comes out). I especially like “Gone Fishing”, sung by John Denver and Floyd, and the environmental “Take ’em Away”, performed by the Jugband. This was the Jugband’s last number, and it’s a great last appearance. A few scenes feature an animatronic version of Robin, which is cool, and it’s great to watch Miss Piggy riding on a real horse. While I am bored with the numbers that feature John’s vocals over wildlife footage of the Rocky Mountains, I do like to watch the nature setting, especially during the nighttime scenes. There’s also quite a few scenes where we see full body shots of Rowlf. That might not be much, but it’s not often we see Rowlf’s legs.

And that’s Rocky Mountain Holiday. It’s not the greatest special ever, but I recommend seeing it if you can. And if there’s ever a “John Denver Mindset” I’d like to see a review from a John Denver fan.