Yesterday was a major news day for the forthcoming Muppet feature film The Muppets… Again! Muppet fans were treated to three incredible new publicity stills, which you can check out in the highest available resolution below! Be sure to click on the pictures to see them in all their glory! 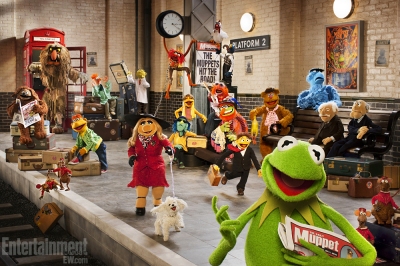 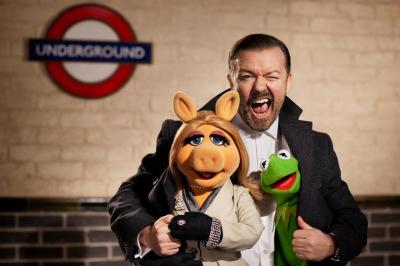 Human lead Ricky Gervais with Kermit and Miss Piggy
On any normal day, those three absolutely incredible images would be more than enough to satiate Muppet fans, but the powers that be weren’t satisfied. The Walt Disney Company released an updated press release for the film, revealing some pretty awesome plot details which you can read about right here, right now!
Disney’s “The Muppets…Again!” takes the entire Muppets gang on a global tour, selling out grand theaters in some of Europe’s most exciting destinations, including Berlin, Madrid and London. But mayhem follows the Muppets overseas, as they find themselves unwittingly entangled in an international crime caper headed by Constantine—the World’s Number One Criminal and a dead ringer for Kermit—and his dastardly sidekick Dominic, aka Number Two, portrayed by Ricky Gervais, creator of “Derek” and the Golden Globe- and Emmy-winning series “The Office” and “Extras.” The film stars Golden Globe-, Emmy- and SAG Award-winning actress and writer Tina Fey (“30 Rock,” “Mean Girls,” “Date Night”) as Nadya, a feisty prison guard, and Emmy Award winner Ty Burrell (TV’s “Modern Family”) as Interpol agent Jean Pierre Napoleon.
Exciting, no? I love the idea of the doppelganger Kermit villain Constantine and can’t wait to find out which Muppet performer will be bringing him to life. Also, who knew that Ricky Gervais would be playing the villain’s sidekick? That’s a major reveal as well!
But would you believe that there’s still more?! Along with the awesome first-look image they debuted, Entertainment Weekly also has a fantastic interview with the one and only Kermit the Frog, which you should absolutely read right now. But if you don’t feel like it, here are some of the major plot highlights:

But wait, there’s more! After winning a Screen Actor’s Guild Award for Best Female Actor in a Comedy Series this weekend, Tina Fey took the time to talk to the press and answer some questions about what she’s doing next. Watch the video below to see the fantastic Tina confirm her involvement in The Muppets… Again!

And yet, there’s more! Academy Award-nominated producer of The Muppets, Todd Lieberman, who is returning to produce The Muppets… Again! talked to MovieFantatic yesterday. He dished some fantastic and exciting details on the new film, saying “We’re in our second week of shooting. It’s gone amazingly well. It’s an unbelievable amount of fun.” But perhaps most notably, Lieberman revealed that there will be new songs as well as old, just like in The Muppets, saying “We got Bret McKenzie back to do the music! It has tons of new songs, and some old favorites.” What old favorites do you think will be included? I’m hoping for “Movin’ Right Along” or “Together Again.” I’m excited to find out!

But wait there’s still even more! Our friends over at ToughPigs.com posted a link to a radio interview that Ricky Gervais gave on the Christian O’Connel Breakfast Show which showcased once again how excited Ricky is about working with the Muppets. He gushes about working with Kermit (and how he’s better than DeNiro), how much he adores Pepe (because, c’mon, who wouldn’t?), and confirms that Academy Award-winning actor Christoph Waltz, who was once rumored for Ty Burrell’s role in the movie, will be making a cameo! That means Christoph Waltz and Ray Liotta are our confirmed cameo stars so far! Extremely exciting and enjoyable stuff, so give it a listen!

Well, that’s that! Tons of exciting updates on the upcoming The Muppets… Again!, which comes to theaters on March 21, 2014, in case you had forgotten. Now that the promotional ball is rolling, I sincerely hope it doesn’t stoop anytime soon, because I’ve already got my popcorn ready.

One thought on “The Muppets… Again! Goes Publicity Crazy”