Ryan Dosier – We’re back again with the next installment of our Muppet Halloween Costume Spooktacular series, where we put a snarky spin on this year’s crop of Muppet and Sesame Street Halloween costumes! Don’t forget to check out Part 1 before reading on… or just read on, it doesn’t really matter.

LIKENESS – …Huh? What? Did somebody say something? I’m sorry. I wasn’t paying attention. I was… definitely not staring at these girls. Just the costumes. Yes. Very professionally just looking at the costumes. Anyway… there’s no real likeness here (although props to the Piggy costume for including gloves, pearls, and pig ears–and to that girl for pulling it off so perfectly), but despite the lack of likeness I’m still all about these costumes… for some reason. 1 STAR
FUN FACTOR – I’m choosing to abstain from answering this one with a number… but yes, fun could definitely be had. N/A
SCARE FACTOR – Shockingly enough, I actually am scared of these. Not the costumes, per se, but if I ever saw a girl looking like that, wearing this, I would be so scared and intimidated that my head might explode. So… yeah. Spooky. 3 STARS

LIKENESS – Wow! Color me impressed! Quite frankly, I’m blown away by the effort some company somewhere put into this awesome costume. Honestly, it’s perfect. The combination of the nose, mustache, and eyebrows really, really sells this. It’s hilarious and everything about the outfit is really well thought out and well done. 5 STARS
FUN FACTOR – SO much fun can be had with this! Gosh, I’m just imagining someone wearing this and carrying around a stuffed chicken and sputtering mock Swedish nonsense. Perfect. 5 STARS
SCARE FACTOR – If this costume came with the Swedish Chef’s famous blunderbuss or penchant to cook anything that moves, then I would up the scare factor… but alas, it does not. 2 STARS 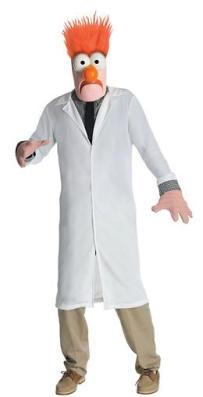 LIKENESS – Wow. Again, PERFECT likeness. That mask is truly incredible. Why has it taken this long to get such a wonderful Beaker mask?! This is amazing. Also, HUGE bonus points for the gloves with only four fingers on them, a detail that no one asked for but make this costume that much more excellent. 5 STARS
FUN FACTOR – This costume would be a lot more fun if there was a Bunsen Honeydew costume to go along with it… but I guess for that all you need is a bald friend to paint his head lime green. Get on that, people who buy this costume! Even by itself, though, this costume is a ton of fun. I know I would absolutely go around the whole night meeping. 5 STARS
SCARE FACTOR – It is scary to think that everything bad happens to Beaker, so perhaps everything bad will happen to the person in the Beaker costume as well… maybe keep your distance from someone if you see them wearing this near anything sharp or flammable. 2 STARS

LIKENESS – In the past, I’ve been very much opposed to giant head costumes like this… but for some reason, this one really works for me. I love the spindly-fingered globes, the facial expression is great (even though the man’s face peeking out of the mouth is horrifying), and the collar is excellent. I don’t really understand why this doesn’t come with green pants and green, fuzzy flipper slippers… but beggars can’t be choosers, I suppose. 4 STARS
FUN FACTOR – This costume makes a perfect couples costume. Kermit and Piggy are always a hit at Halloween parties (I assume, I’ve never experienced any of these in person), and with a costume that looks this surprisingly good, you’ll get some compliments! Also… you can’t not have fun if you wave your arms around and go “Yaaaaaaaaay!!” just like Kermit. 4 STARS
SCARE FACTOR – I will admit… the man’s head looking out of Kermit’s mouth freaks me out. It looks like Kermit was aiming to catch a fly and caught this dude with his tongue instead. DON’T SWALLOW, KERMIT!! 3 STARS

LIKENESS – AHHHH!!! NO!! BURN IT!! What… why… these are just horrendously awful. Especially Kermit and Fozzie. Kermit’s head is a bulbous mass of weird and Fozzie looks like a bad semi-truck accident. And then there’s Gonzo… with his droopy eye, this floppy nose, and chili pepper shirt, there’s not much more that could go wrong with that costume. Good lord. This also begs the question… WHO would pay $50 to wear THESE?! 1 STAR
FUN FACTOR – Nope. Nuh uh. No fun to be had here. Unless you’re burning these costumes with fire. Or acid. Then you’ll have a bang-up time. Otherwise these are just hideous creatures you want to flee from before they ingest you like the poor saps already inside. 0 STARS
SCARE FACTOR – Yup. All about the scary here! Not only does it look like your favorite Muppets have been skinned and worn as battle symbols… but they’re also just awful, awful costumes. Gonzo especially. Ugh. I hate that Gonzo. Even the guy inside these costumes looks miserable!! 4 STARS

LIKENESS – Now see, costume makers, THIS is how Fozzie Bear looks! Honestly, this is the best Fozzie costume I’ve ever seen. I’m pretty impressed. Maybe it’s just lingering horrors of the previous Fozzie costume… but this is not bad at all. The mask is fantastic, the tie is perfect, and the gloves are four-fingered! Accuracy! I really love this. Well done, costume makers! 4 STARS
FUN FACTOR – Ahh! So, what did the pharaoh say when he got scared? I want my MUMMY! Ahhh! Get it? Wocka! Wocka! See? FUN. Even more fun can be had if you bring a pie to throw in someone’s (or your own) face. 5 STARS
SCARE FACTOR – I guess if you got cornered by this mask in a dark alley it could be kind of/totally freaky. But mostly this is just good ol’ Fozzie, the least scary bear on the planet! (Except maybe Winnie the Pooh.) 2 STARS 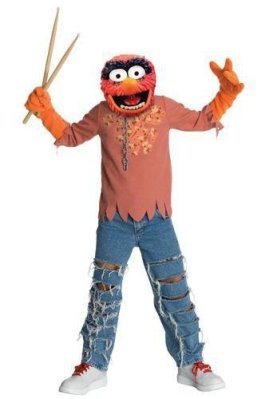 LIKENESS – Huh. This costume works too! Don’t you costume making people know that I can’t be as snarky if the costumes actually look good?! The mask is surprisingly great, the torn clothes are wonderful, the orange arms are nice, and again the four-fingered gloves seal the deal. Even though Animal has never worn a shirt that looks anything like that… this is still a wonderful likeness. 4 STARS
FUN FACTOR – Oodles of fun could be had with this one! Just don’t chase around the girls in the first costumes shouting “WANT WOMAN!!” That might not end well for you. However, if you can get four other friends to dress as the rest of the Electric Mayhem, send me a picture and I’ll say, “You win!” (Which sounds great, but really mans nothing.) 5 STARS
SCARE FACTOR – Unless you’re one of the aforementioned girls being chased by someone in this costume… scare factor is relatively low. 2 STARS

Well, that’s it for this week’s edition of the Muppet Halloween Costume Spooktacular 2012! Come back again next Tuesday when we look at Sesame Street costumes for kids! Including this one below, which I like to call “Mitt Romney’s Granddaughter Loses Her Inheritance”: