The 43rd season of Sesame Street debuted on Monday and the new big thing on the show this year is a brand new segment, Elmo: The Musical. The all-singing, all-dancing segment is designed to replace Elmo’s World, which has really been starting to show its age in recent years. Thankfully, not only does Elmo: The Musical provide a fitting replacement for the legendary Elmo’s World, but it is infinitely more fun and entertaining for anyone who might tune in. 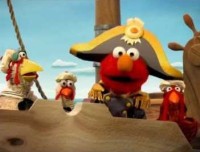 What struck me first about Elmo: The Musical was how incredibly well made it is. Set entirely against a computer animated background, the show not only looks amazing, but feels like we really are participating in Elmo’s imagination right along with him. The colors are vibrant and exciting and the scenery is always fantastic–so much better than the stagnant crayon room of Elmo’s World. In the three segments I watched, “Athlete the Musical,” “Sea Captain the Musical,” and “Pizza the Musical,” Elmo’s imagination took us to an Olympic-sized stadium, a grand ocean, and the outer reaches of space. The segment really allows Elmo to stretch and show off his vibrant imagination and gives us a peak at the giddy fun that is Elmo’s mind.

Another truly excellent factor of Elmo: The Musical is the music. Each different sketch has so much new musical content in it–and every note is pitch perfect. The songs are not only catchy, but they brilliantly straddle the line between education and humor, just as any good Sesame Street content does. Musical repetitiveness is used to great effect here. A prime example is in “Athlete the Musical,” where Elmo is competing to win a pair of golden shoes. Every time Elmo mentions the prize, he slides off to the pedestal where the shoes are sitting and sings a hysterical refrain of “Golden Shoooooes…” This happens four or five times with increasing hilarity. Watching Elmo long for these shoes is fantastic. My favorite song from the three segments I watched was “Dancing with a Whale” from “Sea Captain the Musical.” In this song, Elmo sings with a giant pink whale he’s been searching for, Captain Ahab-style, throughout the entire show. It’s hilarious and the tune is wonderful.

The thing that really makes Elmo: The Musical stand apart from Elmo’s World is the number of characters present in every segment. While in Elmo’s World it was mostly Elmo talking with the silent Dorothy and Mr. Noodle (with a brief appearance by another character near the end), Elmo: The Musical showcases numerous new characters for Elmo to play off of. I saw Martians, an Enormous Athlete, Chicken Sailors, a Pink Whale, Cheerleaders, a Chicken Darth Vader, and more that I’m probably forgetting spread across these three segments alone. They always play secondary to Elmo, but they’re always fun and very funny–especially when they’re interacting with Elmo. These characters are what really make Elmo: The Musical so much better than Elmo’s World. Elmo isn’t talking to the three year old watching, he’s talking and singing with characters on screen. It’s charming and adorable and fun and funny–all the things Elmo is meant for.

The only recurring character in the segment besides Elmo is a giant curtain named Velvet. She is performed by Leslie Carrara-Rudolph brilliantly and is possibly my favorite new Sesame character in ages. Her voice is lilting and operatic, even and she is so excited for Elmo’s newest musical. She completely outshines Elmo’s previous sidekick, Dorothy the goldfish, because she can actually communicate and interact with Elmo. Elmo and Velvet are such a fun pair and I’m so glad the producers decided to include this character. Velvet is a true delight–which I mostly attribute to Leslie’s incredible voice-acting.

One of the only changes I would make to Elmo: The Musical is adding in other established Muppet characters besides Elmo. I would love to see Grover or Murray or Telly participate in one of Elmo’s big musicals. But really, this is a small complaint because we do get to see new, fun one-shot characters in each segment. This allows the Muppeteers to stretch their acting and singing and it’s fantastic. I just think it might be fun for Abby Cadabby or Rosita to get into the mix for one of the Musicals.

In the end, Elmo: The Musical is really the perfect new segment for Sesame Street. It appeals to a much broader, older audience than Elmo’s World ever did. It’s all about music and imagination and fun and it is a brilliant showcase for Elmo, who, incredibly, never becomes obnoxious here. He is a natural born performer and Elmo: The Musical is excellent proof of that. Kevin Clash’s performances as Elmo never falter, and Elmo’s singing voice is as great as ever. While watching Sesame Street episodes, once the street story was over I found myself growing impatient for Elmo: The Musical to start just because I was so excited for it. This new segment is true quality excellence and I am so incredibly thrilled to say that. I haven’t been this impressed by a new Sesame Street segment since… Super Grover 2.0, maybe.

Anyway… that’s enough raving from me. Basically, you should really tune into Sesame Street this season. Elmo: The Musical has sprung to life in such an exciting way. I adore it and I think you will too.

12 thoughts on “Elmo: The Musical – A Review of the Revue”