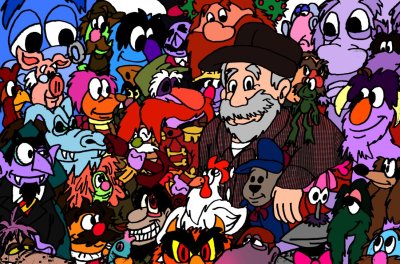 Josh Hankemeier I heard the news just before I started work that morning… “Jerry Nelson…1934-2012” No… Like many of you, I felt like a sledgehammer hit me in the chest. It was like May 16, 1990 all over again. “Dear God, no…” I whispered at the monitor. With every post I read about it, the hammer blows only increased. Jerry Nelson was gone. I read the posts until I couldn’t take it anymore… fresh sets of tears turned the computer screen into a shapeless, glowing blob.

It was extremely tough to work that day. Like everyone else here, I loved Jerry too. I only met him through Facebook, but at least I was able to tell him how much Fraggle Rock meant to me and to thank him for all the wonderful songs, characters and all around positive influence he had on my life.  Jerry had this to say in response: “I’m glad you are still finding value in Fraggle Rock. Nice to have been a part of something that focuses on a tale of love, laughter, music, and symbiotic relationships and is still relevant to our selves.”

I was lucky enough to receive Jerry’s autograph in the mail once back in January 2000. What a great way to start the millennium! My only regret is that I didn’t tell him about my wedding cake. My wife and I just got married on August 4th. The photographer hasn’t gotten our photos done yet, otherwise I would’ve shown Jerry the picture of the cake. It was an exact replica of Ma and Pa Gorg’s 513th anniversary cake from “Ring Around the Rock.” It even had the PVC figures of Ma and Pa on the top. We chose it because of our love for Fraggle Rock… a masterpiece, and one of the most positive influences of our lives.

Also displayed at the wedding were photographs of those we loved and admired: those who were not present physically, but still beloved by myself and my bride. Among the photos of family members and loved ones who had passed away was a group shot of some of the main Muppeteers: Jim, Frank, Richard, Dave, Steve… and Jerry. Just minutes before I was wed, I glanced at their picture and silently thanked them all. Along with my family, the Muppets were a huge source of silly joy. Jerry was an important part of that.

Often things in the real world remind me of things in the Muppet universe. When I see construction workers, I always think of Biff and Sully. Any restaurant I am in, I smile if I see swinging kitchen doors with circular windows. I hear Fat Blue’s frustrated cry of “WAITER!” in my head every time. The fourth stair outside my apartment complex isn’t in the nursery. It isn’t in the town. Finally, let’s face it. Every single one of us Muppet fans who has heard thunder and lightning immediately thinks of the Count. I did just last night. A storm went through here and as the thunder rumbled outside, I said “Ah ah ah!” in my best Count voice. It was a reflex. I looked up at the churning sky and thought with a sad smile “Jerry’s still counting.”

There’s more I could tell, but as the song says…”So much to say, foolish to try.” Keep on counting up there, Jerry.  We miss you, we thank you and we love you.

Goodbye Jerry Nelson by chricko
Benny Sheckner – Something that differentiates the Muppets from a lot of other puppetry is that the characters are beyond lifelike–they’re soulful. In spite of their technically being inanimate objects, each and every one of them oozes humanity. Jerry Nelson brought the epitome of that soulfulness and humanity to each and every one of his characters. He came across as a man who wore his heart on his puppet sleeve. He knew both how to make the puppets emote independently, in character, and how to express his own emotions through them, while still remaining one of the most diverse performers in the history of the form. A truly uniquely talented man.
But on a more personal note, Jerry Nelson’s characters have, for as long as I can remember, been my favorites. As a child, I related to the sweet, but also slightly sad nature of Robin. Snuffy was, and always will be, my best friend. Gobo’s sense of adventure has made me a less inhibited person. And Floyd—my favorite Muppet of all time—will always have a special place in my heart. I can still remember seeing his iconic rendition of “While My Guitar Gently Weeps” for the first time. I remember, as a child, thinking that there was something greater going on on my television screen. It was the first thing to have an effect on me that could be described as profound. To this day, hearing Floyd’s version of that song will bring a teardrop to my eye.
Jerry Nelson, there will never be another one like you. And while it’s reassuring knowing that your legacy will live on because of that, it’s disconcerting knowing that we’ll never live in a world with Jerry Nelson ever again. I miss and love you, and will never stop thanking you for all of your contributions to my life.

Leave Me Some Magic Jerry by TeriyakiOxO
Phoenix Alvarado – Ever since I was little I always thought the voice of Jerry’s characters as comforting, like his characters were specifically talking to me. From The Count helping me count to Floyd Pepper singing about fishing with John Denver. Lately my little brother has took a liking to his awesome characters that we will all miss without his voice. One day I found a Sesame Home Video titled “Monster Hits” and he fell head over heals in love with Herry Monster and Frazzle. Just the other day my brother came up and told me that Herry Monster is his best friend and I couldn’t help, but smile and be a little sad at the same time for I knew what had happened. Jerry, a man I never met in person or through email, has touched the heart of my sibling and probably many other kids and adults as well as me with his wonderful Muppets that will be missed. RIP Mr. Nelson and thanks for everything.

Thanks Jerry by Sash Waite
Emilio Delgado (Luis) and his wife Carole – We have been out west for most of August and were aware through emails of Jerry’s failing health. Of course we have observed his health highs and lows and had hoped he would hang in there so we could visit with him upon our return east.
It really is sad–but such a gift to have known and worked with a person as special as Jerry. His talent and humor was also equal to his humanity. We have enjoyed the bitter sweet pleasure of receiving mails from his close circle of friends and colleagues that have lifted spirits and produced some smiles in regard to his recent passing.
We appreciate that Jerry Nelson touched a wide circle of people through his many talents–which we are all a part of. 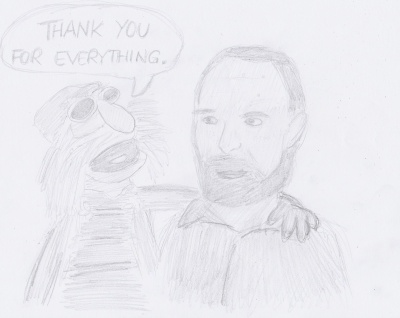 Jerry Nelson & Floyd by Barbara Barac
Jim Lewis (Muppet writer) – I’m still reeling a bit and not sure I have anything profound to add to what’s already been said. He was a gift–and one heckuva fun guy to hang out with. Like a Boomerang Fish, through his work, Jerry will always come back to us. 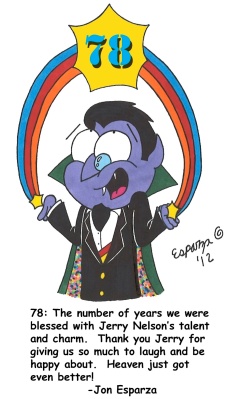