Ryan Dosier – A week ago today, I had an incredible evening as I went to see the new Disney stage musical production of Aladdin. Why would I be writing about this on a Muppet website? Great question–and I have a great answer! It is because Muppeteer and performer extraordinaire John Tartaglia was playing the Genie in the show! If you’re unaware of John, he has been a puppeteer on Sesame Street since he was only 16 years old. Later, he performed the lead, Princeton, in the original Broadway cast of Avenue Q, for which he was nominated for a Tony Award. Most recently he conceived, directed, and hosted Jim Henson’s Musical World at Carnegie Hall in April, which brought together the Muppets, Sesame Street, and Fraggle Rock characters for the first time in 20 years.

I had the wonderful opportunity to meet John before the Aladdin show on July 9th. He was kind enough to sit and talk Muppets with me for about an hour before he had to go get ready to entertain 10,000 people. We talked at length about everything from Jerry Nelson to Fraggle Rock to Jim Henson’s Musical World to Disney to anything else you might come up with. He really is fantastic, and I hope I can bring you, The Muppet Mindset fans, an interview with my new friend John soon. For now… enjoy this picture of the two of us before the show! 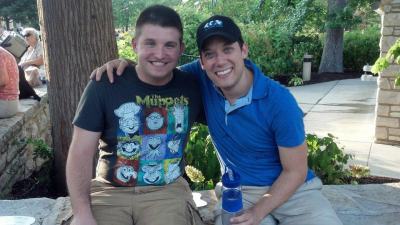 Then it came time for John’s performance as the Genie. He was spectacular. Once Aladdin rubbed that magic lamp and John took the stage (in hysterical fashion), he took over the show and never gave it back. He had all the jokes, all the show-stopping production numbers, and all the adoration of the audience. Having seen the show twice (I went back to see it on July 13th–John was that great), I can safely say that the Genie was everyone’s favorite part of the show. John as the Genie completely stole the show and the audience took notice. It was amazing. The sheer amount of improvising and ad-libbing John did during the show was astounding. Half of his jokes were different during the two shows I saw. You can see a little bit of John’s performance (but not nearly enough of it) in this video below…