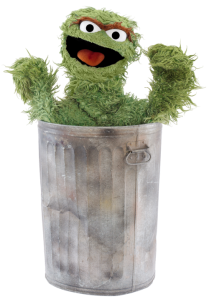 Michael Wermuth, Jr. – Oscar the Grouch. He’s such a great character, isn’t he? But today our focus isn’t on Oscar as much as it is on his trash can. Because his trash can is such an integral part of the character. It’s where he lives, and it has had changes over the years. There are so many observations to make about that trash can, and I am here to talk about them.

First, let’s talk about how that trash can looks, shall we? When the show began, the trash can looked a bit shinier. Maybe too shiny for a grouch, because it soon got darker and rustier. In Follow That Bird Oscar lives in a different-looking trash can. I can’t exactly pinpoint the difference between his Sesame Street trash can and his Follow That Bird trash can, but I like how it looks in that movie. But in Elmo in Grouchland it looks very shiny. Not very good for a grouch. I give it some slack for the first episode because the show was new, but for 1999 I’d say a shiny trash can for Oscar is unacceptable.

And now let’s talk about the lid. Oscar’s lid is hinged to the trash can, staying upward whenever the trash can opens. In the first episode we can actually see some wires that keep the lid open, though later on we don’t see anything. As we all know in illustrations, Oscar wears his lid as a hat. The reason for Oscar wearing his lid as a hat but not on the show was explained in a Muppet Mindset article, straight from illustrator Joe Matieu’s mouth. Basically somebody didn’t think it looked right when in illustrated form Oscar’s body appears in front of an open lid, but it had to be done that way on the show. But then again, whenever Bruno carries Oscar’s trash can, the lid is just hanging from the side of the trash can. I guess if the lid was hinged up when Bruno carried the can the lid would easily keep falling onto Oscar. But there are times (such as in episode 1899 and in the “Sesame Street, Special”) where Oscar can be shown shutting and/or opening the lid on this particular trash can, showing that it is possible for Oscar to open and close it without the lid needing to be hinged on.

And then there’s the subject of Oscar’s traveling can. In the third season Oscar cut holes in the bottom of the trash can allowing him to walk with his trash can. A clever idea, but lately I’ve been wondering if they did this so illustrators could avoid drawing his whole body if needed. After all, Oscar has often been seen outside of his trash can, though in the early years it seems he’s rarely out of the can. When Oscar walks this way we only see his legs, the lid on his can being shut. I guess it’s hard to find a short person who could also operate the puppet while wearing the legs. But in illustrations when Oscar uses his traveling can we do see the top part of Oscar in addition to his legs at the bottom.

And finally there’s the inside of the trash can. It’s rarely shown, but it seems to be bigger on the inside than on the outside, assuming it is inside as opposed to a bigger area underneath the can. I know that The Sesame Street Book & Record has some sort of map thingy to the inside of Oscar’s can, drawn as if it’s underground. The only time we got a really good look at the inside of Oscar’s trash can was in The Adventures of Elmo in Grouchland, where it looks very impressive. The fact that Oscar cut holes in the bottom so he could bring his trash with him when he travels sort of defeats the theory that his home is actually under the trash can, yet holes in the bottom make it easier for Oscar’s items to fall out.

All in all, Oscar the Grouch has a great trash can. Too many places have trash cans that do NOT resemble Oscar’s. They’re often too plastic and sometimes have wheels and handles, and for some reason they put those garbage bags inside them. Yuck! Who would want those? I say that the only proper trash can should be metal, rusted, with no bag inside, and a round lid, preferably one that can be hinged. And maybe put a swimming pool inside it as well.

2 thoughts on “The World of Oscar’s Trash Can”