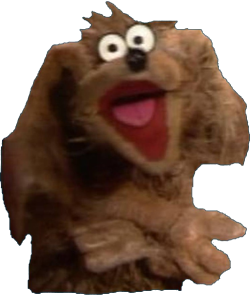 Well known quote…
“If your grocer happens to be out of Purina Dog Chow, try asparagus!”

WHO IS BASKERVILLE THE HOUND?

Baskerville the Hound was Rowlf the Dog’s co-star in commercials for Purina Dog Chow. Many of Jim Henson’s early commercials featured duos. One half of the duo usually hated the product being promoted and ended up heavily injured as a consequence. In the Purina commercials Baskerville was often the victim, though his sufferings weren’t as extreme as others and he didn’t seem to actually hate Purina Dog Chow.

Unfortunately for Baskerville, it was Rowlf who became a big star. Baskerville would be used less and less for many years. One of his most notable appearances during this period was in a Sesame Street sketch, “Pick Your Pet,” as a potential pet. It wasn’t until 1976, when The Muppet Show began, that Baskerville would once again make frequent appearances. While he was never a major character on the show, he was frequently put in group numbers that mixed major and minor characters.

Most of Baskerville’s major appearances on The Muppet Show paired him with his former co-star Rowlf. In one notable sketch, Baskerville played Watson to Rowlf’s Sherlock Holmes. Baskerville also appeared as a patient in Veterinarian’s Hospital, a recurring sketch that starred Rowlf, and Baskerville sang a number of songs while Rowlf played the piano. Baskerville’s most notable appearance without Rowlf came in episode 208, when he auditioned to be a Fozzie Bear-like comedian, only to be yanked off the stage by Fozzie. For the most part Baskerville wasn’t seen much after the show ended, but he did continue to be used from time to time.

WHY DO THE MUPPETS NEED BASKERVILLE THE HOUND?
For the most part, Baskerville is not really needed, but he was necessary in the Purina Dog Chow commercials. He was a perfect co-star/foil for Rowlf. If the commercials only had one dog, Rowlf would likely be the victim (or the commercials wouldn’t have been very funny). Aside from that, Baskerville helps fill out the number of dog characters in the Muppet universe, and next to Rowlf (and maybe Foo-Foo) Baskerville seemed to be used the most. Rowlf could use a good foil nowadays, and Baskerville is always good for a laugh. 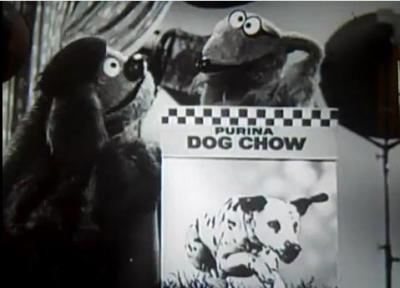 One thought on “Weekly Muppet Wednesdays: Baskerville the Hound”