­­­­­­­Jarrod Fairclough – I would like you present to you the shelf in my room, which I call “The Pop Culture Shelf.” My Dad calls it “Girl Repellent.” My Dad is a mean man. 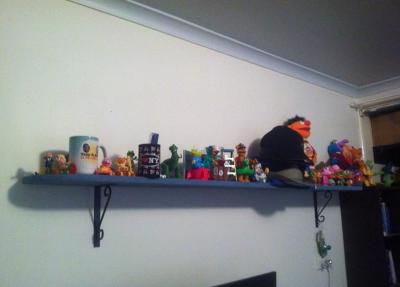 As you can see, it’s full of Muppet stuff. And Toy Story stuff. And Community stuff. Six Seasons And A Movie! And I’d like to show you each little piece of it in my Muppet Collection Chronicle! We’ll start with some of the more obscure items in my possession.

This is a PVC Statler from 1978, and was only available in The Muppet Stuff store. He’s from the German company Schleich and if you get a chance, go look at their Muppet Wiki page. Those are some weird looking PVC figures! He was given to me only a matter of weeks ago from a family friend who found him in a desk drawer he hadn’t cleaned out in 15 years. He’s awesome.

These are 1986 Muppet Babies Happy Meal toys. Animal and Piggy can swap vehicles, as can Kermit and Fozzie. These were bought for me from my parents at a garage sale. It just proves that my parents are awesome. Although sometimes I get the feeling that Animal is staring into my soul…

These next two are the well-known Palisades figures. Super Hero Scooter and Vacation Fozzie. While these were available in Australia, they were very, VERY hard to come by, and you were lucky if you got one. I had all but given up finding them when I decided I wanted to buy them, and I was looking into buying some online. I went to a local antique store once last year and I found Scooter. I bought him immediately. About a month later the owner of the store saw me where I work and informed me that he had a Fozzie come in. I went in the next day and bought that. Both were still sealed in the box when they were sold to me.

These are my Ernie and Bert toys. There’s a great story behind Ernie, but I like to keep that private. Bert is just awesome. He was given to me by my Nan. She’s an expert at those claw machine games. And I mean expert. In ten years, she hasn’t had one loss yet.

These are my Muppet Vinylmation that I bought in Disneyland. I’m not 100% sure I like them anymore. I think Rowlf looks too weird. But how good is Disneyland? I want to go to Disney World, but as Ryan can attest to (seeing as I had an hour conversation with him about it today) it’s not financially possible right now! Boo!

Naw, this is my Tickle Me Ernie Extreme. My best friend bought me this for my 19th birthday. It’s hilarious, Steve Whitmire did a brilliant job recorded the laughs for it. I took it home and showed it to my family. My aunty was laughing so much she was crying. She said “There’s something seriously wrong with that.” And then next time I went to her house she had one. 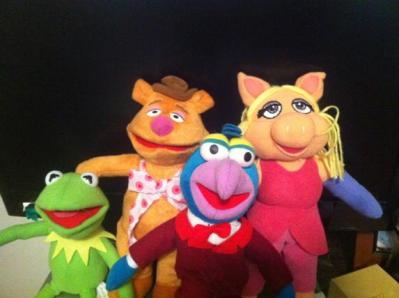 What a handsome group! Except Gonzo’s doing his best Marty Feldman impression. And Fozzie looks sad.  Still, these are awesome toys. Piggy was given to me by my Nan again (claw machine). I bought the others.  Surprisingly, the other Gonzo and Fozzie toys looked worse. Kermit looks awesome though. My 11 month old niece loves Kermit. She gives him lots of kisses. Kermit is damp with drool half the time…

Uh, my newest items! I absolutely love these things. How awesome is it that in 2012, you can buy a newly made figurine of Dr Teeth, of Mahna Mahna, and of a Snowth? These are only 24 hours old at time of writing. I keep looking at them going “That’s cool… That’s cool.” You’ll notice that all the toys are standing nicely, but Mahna Mahna is leaning back resting on the DVD player. That’s because he’s pretty top heavy, and keeps falling forward! 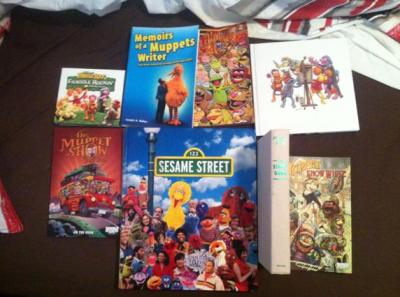 Here’s just a selection of my Muppet books (and a Fraggle Rock CD which isn’t meant to be there). Not shown are stuff like Sesame Street Unpaved or Muppet Show: Family Reunion (can’t find it). If you haven’t read Memoirs of a Muppet Writer, I cannot recommend it enough. My gosh, it is brilliant. I knocked through it in 18 hours. And then I read it again. 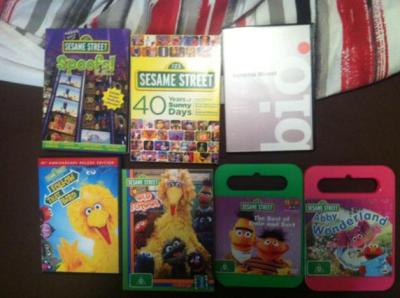 Here’s some (blurry) DVDs. I just watched Follow That Bird the other day, and then I watched The Best of Ernie and Bertwith my niece. The top right is the Bio Channel episode on Sesame Street. That’s a great documentary. Not shown are things like Being Elmo or Elmo’s Letter Y Quest. (Have I mentioned I went to the set of Sesame Street, and they were filming this episode? I have? Like 50 times? Sorry.) Abby in Wonderland is a strange special. I think I’d be happier with it if it wasn’t in a pink case…

Here’s some CDs. Fun fact: The first CD I ever owned was Sesame Street: Silly Songs. The one on the right isn’t a CD, it’s a game. One that I believed was featured on this very site. I can get through that game in 45 minutes flat now. I used to play it every Saturday morning, for about a year. 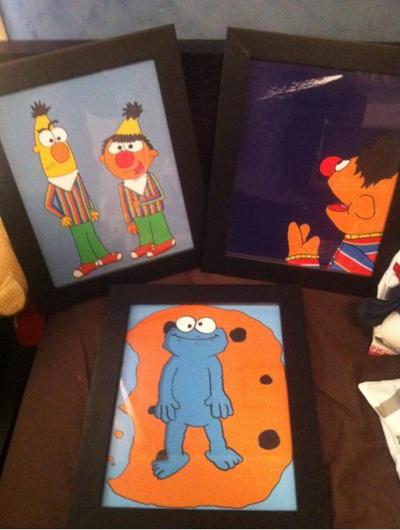 Finally, this is something my parents had done for me.  As you know, Threadless had their Sesame Street challenge. I entered these three images, and while they probably won’t get printed (the highest average score I got was 2.67, but I’m not going to get into that now, that’s another, much angrier, article) my Mum loved them, especially the Ernie “I Wonder” drawing, and got them printed nice and big, and framed for my birthday. It’s awesome. They’ll probably stay off the wall until I move out, but I can’t wait to put them up in like a home office or something.

Finally, I’ll quickly show you once again the most prized Muppet possession I own: my Jim Henson signature. Someone asked on the last post if it was authentic. Yes, it is. There’s a certificate of authenticity that came with it, it’s currently in the frame behind the image.
So that’s the bulk of it. There’s t-shirts and other books and DVDs etc., but this is the main cool stuff. Have a lovely day my friends. And go on Twitter and follow @MuppetFanProbs, because that’s now me doing all of those. Come be Twitter friends with me!
Love,
Jarrod
The Muppet Mindset by Ryan Dosier, muppetmindset@gmail.com