NEWS UPDATE: May 17, 2012
Remember a few years ago when the Muppets were never on television? Yeah… me too. Aren’t you so glad that’s changed? Nowadays we get Muppets on TV at least once a month! And May is no different, as Kermit the Frog and Miss Piggy are scheduled to appear on ABC’s The Bachelorette this coming Monday, May 21st. We have a short clip of their appearance thanks to our friends at StitchKingdom.com and Disney/ABC! Check it out below:

The fine folks at Garmin GPS have released some exciting new character voices for their GPS that will give you directions to wherever you need to go (probably). Now, if you own a Garmin, you can get your directions from Bert and Ernie, Cookie Monster, and Oscar the Grouch! You can hear our furry pals give some guiding advice on the Garmin Voices website and purchase the content from there as well! Anybody want to donate a Garmin GPS to The Muppet Mindset? For… business purposes, of course! 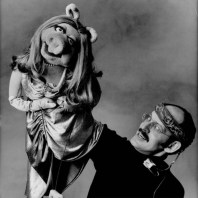 It’s always a rare treat for Muppet fans when Frank Oz gets interviewed in an official capacity. Well, that just happened again, with this brief interview with Entertainment Weekly magazine. In which he discusses the remake of his classic Little Shop of Horrors. But what is more interesting to us Muppet fans is his discussion of the new Muppet movie, The Muppets, and his attempts to not have “sour grapes” about it. He seems semi-positive about it–at least about the characters being back in the public eye, which is a lot more positive than he was last year.

Speaking of interviews with awesome people, friend of the blog and Muppeteer extraordinaire Matt Vogel was recently interviewed for Dramatics Magazine. In the interview, Matt discusses playing Big Bird, working with the other Muppeteers, performing Jerry Nelson’s characters, and the World Premiere of The Muppets (where we ran into each other). There’s a moment in the interview where he talks about coming off of the green carpet to sign things for the fans, and I’m proud to say that I was the first fan he talked to when he came over there! Anyway… check out the interview because it’s absolutely fantastic.

Finally, we have yet another beyond incredible video of Muppeteer legend and friend of the blog Jerry Nelson recording the song “Little Red” for his beautiful, amazing album Truro Daydreams (which you absolutely have to buy right now). What makes this video even more spectacular is the added vocals of two more friends of the blog and Muppeteer legends: Kevin Clash and Fran Brill, who provide the voices of the Big Bad Wolf and Little Red Riding Hood. Plus, a brief appearance from Carroll Spinney! The video comes straight from Muppet writer/Jim Henson Legacy coordinator Craig Shemin, whom you should follow on Twitter… after you watch the video, of course.