Michael Wermuth, Jr. – It’s been a decade since Palisades Toys released its first series of Muppet action figures in 2002. The line ended in 2005 and there most likely won’t ever be anything like these figures again. Fans of the line and the Muppets in general should absolutely celebrate ten years of the figure line. The action figures are among the best Muppet merchandise ever made, and are certainly the best Muppet toys ever. With so many characters, such great likenesses and detail, and even accessories that are as good as the figures, this line was perfect.

It was first announced that Palisades Toys would be releasing action figures of The Muppet Show characters in 2001, just a few months after it was announced that The Jim Henson Company was going to celebrate the 25th anniversary of The Muppet Show. Series 1 had an odd assortment of characters: Kermit the Frog, Miss Piggy, Dr. Bunsen Honeydew, and Dr. Teeth, plus a Muppet Labs playset with Beaker. This assortment of both fan favorite and general favorite characters gave Muppet fans major hope for what was to come from this burgeoning new line of toys.

Initially, Palisades’ contract allowed for four series, before the contract was extended to last until 2005, bringing us nine series of figures. The contract also initially limited the line to just The Muppet Show, but was later extended to include the Muppet movies and Muppets Tonight. Ken Lilly, who was very much responsible for the greatness of this action figure line, was also essential in providing information about the line to fans, both on the Palisades Toys forum and Muppet fan sites. Eventually, the official Palisades Toys website included a feature called “The Daily Bit,” which frequently provided news on the Muppets, as well as a message board, including a Muppet forum. I was a big fan of the figures, but my collection is nowhere near complete. I never attended any of the conventions that sold exclusive figures, never joined the Palisades Collectors Club, only own a few exclusives, and don’t even have every regular-series figure, though I do have at least one of almost every character released as a main non-exclusive figure.

Most of the Muppet figures resembled the puppets extremely well. Most of them had sculpted felt or fur texturing. The people at Palisades Toys did consider giving the Series 1 Miss Piggy and Beaker figures rooted hair, but I’m glad they settled on plastic hair sculpts. Most of the figures look close enough to the actual puppet, though there’s sometimes something off that I can’t quite pinpoint. I’d say that Lew Zealand, Clifford, and maybe Beauregard have the most perfect likenesses when compared to the puppets. I cannot think of one thing inaccurate about the looks of those characters. Many of the accessories are great as well. Not only did every figure come with what’s expected (like fish for Lew Zealand, and a plunger for Crazy Harry), but there were also many accessories related to scenes from The Muppet Show, Muppets Tonight, and the movies. Rizzo came with some props from Muppets from Space, the Swedish Kitchen play set included a number of accessories based on specific sketches, and many more examples were released. One of the coolest accessories is Rowlf’s piano, which opens on top and has removable legs. 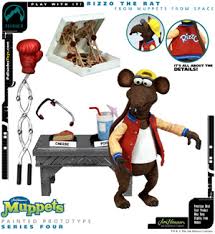 Many smaller characters were included as pack-ins with regular-sized characters. Pack-in characters became much more common later in the line, and fans were able to own the Muppaphones (naturally with Marvin Suggs), Polly Lobster (with Kermit as Captain Smollett), the Java Muppets (with Lips), and of course Camilla the Chicken (with Series 5 Gonzo), among others. Despite their size, Rizzo the Rat was released as a main action figure, as were Pepe the King Prawn and Robin the Frog in his Frog Scout uniform.

There were five play sets, all of which came with a character. Beaker came with Muppet Labs, Animal came with the Electric Mayhem stage, the Swedish Chef came with the Swedish Kitchen, First Mate Miss Piggy came with the S.S. Swinetrek, and Rowlf came with the Backstage. At first there were plans for one playset in each series, but the lack of retail success for playsets led to only two, and then one, a year. Among the planned playsets include The Electric Mayhem bus and the Muppet Theater Stage, which would have been big enough to fit other playsets inside. At first the playsets looked very different from the sets seen on the show, due to Palisades not having the same time and budget restrictions as the show had, but the Backstage Playset, especially, was almost identical to the show.

There were many exclusive figures as well, with Sweetums, Uncle Deadley, Penguins, and the Jim Henson Muppet are the only characters released only as exclusives. There were quite a few exclusives that weren’t based on any specific Muppet moments, like Super Beaker. Palisades Toys would put out exclusives available at all toy conventions the company attended those years, which included Tour Animal and Adventure Kermit. The very first exclusive released was a Dr. Teeth repaint, with black and white stripes. This sold out within hours of its release at a toy convention, and has gone on to sell for high prices on eBay. Later, Palisades Toys started a Collectors Club, where fans could order convention exclusives. Palisades also released “give-aways,” exclusive figures that were given to members of the press at conventions. These were existing sculpts with repainted clothing and no accessories.

Financially, the Palisades Toys line of Muppet action figures were not the most successful. After Series 5, stores like Target and Toys R Us stopped carrying the figures, making them harder to find. However, most, if not all, reviews were were extremely positive, the line won many awards, and they were a big hit with the people who bought them. It was certainly popular enough to last nine series, but as the line was ending Ken Lilly said that the line wasn’t as successful as the fans thought it was. A couple years after the line began the market was less interested in collectible figures as it had been, and retail support for the Muppets was always small, mainly limited to places that specialized in collectibles.With sales becoming slower series 10 was canceled without being offered, with most of the planned figures sold as exclusives.

Still, it was a great run for a great bunch of figures. Every essential character from The Muppet Show was released, along with obscure characters like Marvin Suggs and Lips. It is nearly impossible to call the selection of figures incomplete–the only notable example being no Sal Minella figure being released alongside Johnny Fiama. Even though the company didn’t make EVERY Muppet ever, it was an extremely impressive line. The years when the figures were in production were also among the best years for Muppet merchandise almost entirely because of these incredibly detailed and delightful figures. No matter what sort of merchandise other companies made or may make in the years to come, it will be extremely difficult for anyone to ever measure up to the quality, craftsmanship, dedication, passion, and fun that Palisades Toys brought Muppet fans for three years. If you own these figures, you know what wonderful treasures they truly are.