In news about something you should do right this second if you have Netflix: Go watch Being Elmo: A Puppeteer’s Journey. The touching, heartwarming, beautiful documentary about Kevin Clash and his journey into the world of Jim Henson is now online for instant streaming on Netflix and you can watch it right this second. So why aren’t you?! Work? School? Personal responsibilities? Fuh! Go watch! I finally got to see this wonderful film for myself last week and I was more than moved. I teared up, I had shivers, and I was blown away by how amazing Kevin’s story truly is. Be sure to check this out for yourself if you can… but if not, Being Elmo will be available on DVD in April. 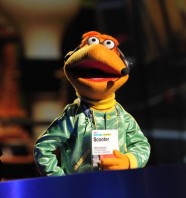 Major crazy/random news this week as everyone’s favorite go-fer, Scooter, made an appearance and gave a speech at the TED Conference in Santa Barbara, California. Yes, that Scooter. By himself. Giving a speech. In 2012. I don’t know how it happened either, but the TED Blog has a recap of the events and our pals at Muppet Wiki somehow found a video of the incredible appearance which you can watch below. But first… how awesome are Scooter, David Rudman, The Muppets Studio, and TED for making this happen? SO awesome.

As you all (probably) know, the Academy Awards were last weekend and The Muppets took home an Oscar for “Man or Muppet” (which was probably the most awesome thing since the movie). Well, you probably also know that there was a massive amount of pre-show content on both ABC and E! Well, on the latter, Kermit the Frog made an appearance with Glee‘s Darren Criss. The talented duo performed Kermit’s classic “Rainbow Connection” before the Red Carpet began and… well, it was beautiful. You can watch and listen to the song on E! Online!

Speaking of the Oscars, you should also know that Kermit and Miss Piggy appeared at the ceremony to introduce Cirque du Soleil (we don’t wanna talk about it). Well, the frog and the pig also made the red carpet rounds and appeared only very briefly on the red carpet telecasts. Their appearance caused such a fervor, however, that people all over Twitter mentioned Miss Piggy in their tweets with the hashtag “#bestdressed.” So many people tweeted that Piggy was the best dressed, in fact, that she was the fifth most tweeted Best Dressed celebrity on the red carpet. Do you realize how major this is? Miss Piggy was voted the FIFTH BEST DRESSED ahead of Angelina Jolie, Jennifer Lopez, and countless other starlets. Also very much worth mentioning… the Best Original Song win for “Man or Muppet” was the fifth most tweeted about moment of the entire Oscars telecast. That’s huge. Muppet domination isn’t going anywhere, people!

And now, probably the biggest news since Scooter presented at the TED Conference (probably even bigger than that), according to huge entertainment resource, Vulture, The Walt Disney Company has tapped director of The Muppets James Bobin and co-writer Nicholas Stoller to write another Muppet movie!! This is MAJOR news. Literally less than six months after the release of The Muppets, another film has already been put into the works by Disney. If that doesn’t spell confidence in the characters and the filmmakers and the performers, I don’t know what does. You will, of course, notice that Jason Segel is not writing the script this go around–but not because Disney doesn’t want him to. Jason is a star with huge commitments–currently starring in two feature films, writing another, and starring in his hit sitcom How I Met Your Mother. He is simply too busy to commit to writing another movie. There is no saying that Jason won’t produce or appear in the movie, but it is far too soon to tell. Just don’t get in an uproar, Muppet fans… unless it’s an uproar about how unbelievably thrilled you are that another Muppet movie is in the works already!