For the past few months, the Muppets have been the major darlings of Entertainment Weekly magazine. The Muppet Show cast reunited, the first image from The Muppets (and Walter) were revealed, and Kermit graced the cover of the magazine all in this past year alone. Well, the love for the Muppets continues in this week’s issue, Entertainment Weekly‘s “Best and Worst of 2011” issue. As you can see at right, Kermit and Miss Piggy are very prominent on the cover of the issue out this week–right alongside George Clooney, Harry Potter, and all of the other prominent features in pop culture this year.You can read all about the issue on Entertainment Weekly‘s website, and you can find it on newsstands everywhere now!

One of the favorite props in The Muppet Movie is Fozzie Bear’s Studebaker (well, technically his uncle’s Studebaker)–a bear’s natural habitat, obviously. Well, unfortunately, the Studebaker used in the film is in need of some serious repairs, as outlined by local ABC affiliate where the Studebaker Museum is located. The repair costs are in the upwards of $40,000… and it would be a crying shame to see Fozzie’s Studebaker fall into complete disrepair. The Museum’s website features an “Adopt-A-Car Program” with a wide range of donation options for adopting one of the Studebakers. Perhaps a generous and well-off Muppet fan might have the means to the end of fixing this true legend of a car.

A brand new, must-have book has been released recently for Muppet fans written by longtime Muppet writer and veteran of Sesame Street and The Muppet Show, Joseph A. Bailey. The book is called Memoirs of a Muppet Writer and is available on Amazon now for only $15. Below is an excerpt from the official description of the book!

Remember when Walter rocked Late Night with Jimmy Fallon alongside Jason Segel a few weeks ago? Well, Walter is back in an exclusive video from backstage on NBC as everyone’s favorite new Muppet checks out the legendary Muppet Pipes in a closet in a guest room painted by Jim Henson, Frank Oz, and Jerry Juhl. It’s truly amazing to see old Muppet history meeting new Muppet greatness. Check out the video below!

This past Wednesday, Archaia Comics released a brand new comic book from a screenplay by Jim Henson and Jerry Juhl, Jim Henson’s The Tale of Sand with illustrations by Ramon Perez. I have yet to pick up the comic, but it’s on my “Must-Do-Immediately” list. BleedingCool.com has a great look at a really cool edition of the comic where they talk a lot about how great the comic is and what a wonderful tribute it is to both Jim and Jerry. Be sure to pick up your copy of The Tale of Sand as soon as you can! 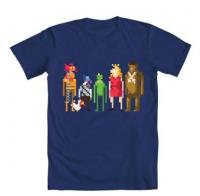 Our good friends at WeLoveFine T-Shirts have released a whole horde of fantastic shirts featuring The Muppets and Sesame Street characters, including the winners of their recent Muppet t-shirt design contest. But the highlights recently are various 8-Bit designs that pit the characters in pixelated forms, a la the classic video games of the 1980s. There’s a great one with the Muppets (see at right), Sesame Street, and featuring Bert and Ernie in Super Mario Bros.-esque poses. I’ve got to get at least one of these… now the only problem is figuring out which one!

Finally, Amazon.com has released images and slight details on the Blu-ray and DVD release of The Muppets. No official release date has been given yet, but rumors of a March 20, 2012 release are abounding around the internet. There are four different versions of the movie that will be made available on Blu-ray and DVD next Spring. First up is the Three-Disc Blu-ray “Wocka Wocka Value Pack” featuring the Blu-ray, DVD, and Digital Copy, as well as the Soundtrack. Next is the Blu-ray/DVD Combo Pack featuring the Blu-ray and DVD. Then, the Single-Disc DVD with the Soundtrack. And, lastly, only the DVD, whose cover art is not confirmed yet. I don’t know about you, but I’m not thrilled with the cover art on any version… but I’ll just be excited to own the movie on Blu-ray and DVD the day it’s available (if not before) (I don’t know how that would work, but whatever).