Ryan Dosier – Life is something that, I’ve learned multiple times over, can surprise you endlessly. Every day has the potential to be surprising and wonderful every time you wake up. The morning of November 10th, and the three days afterwards, was just that for me… surprising and endlessly wonderful. This is the story of how a 21 year old guy with a Muppet fansite lived his dream, presented in three parts. That guy is me, and that dream was living the high-life with big-shots and personal heroes in Hollywood for four days straight.

It all started just before Halloween, when a light shined my way as one of the greatest people to ever come into my life changed everything for me. Cristina Barretta, the unbelievably kind, generous, awesome, and, to me, life-changing wife of the one and only Bill Barretta (both of whom I had met in Los Angeles last summer) got me on the invite list for an early screening of The Muppets. Now, being a broke college student my better judgement was against the idea of flying to LA just to see The Muppets a week early… but being a Muppet fan, my real judgement jumped to the forefront and was smart enough to say HECK YES I WANT TO BE THERE!!

And thank goodness I did, because a few days later I received an email from Disney (you know… the mouse) with an invitation to the screening. I leaped from my chair just seeing the invitation come into my inbox… and then I read it. Here, see it for yourself! (Click to make it bigger.) 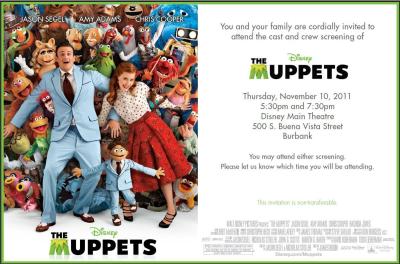 So, as you can see, I found out that I had been invited to the cast and crew screening of the movie being shown on the lot of The Walt Disney Studios. This was beyond anything I could have imagined and every single day I have thanked my lucky stars that I decided to jump on this opportunity. To make all of this even better? The World Premiere of The Muppets was happening at the El Capitan Theatre on Hollywood Boulevard just two days after the screening… and I would be able to go. Everything was perfect, falling into place…

November 10th came slowly but surely and I flew away from home, by myself, for the third time in less than two years, to Los Angeles. The kid from farmville, Illinois with a small but passionate blog about the Muppets was flying to Los Angeles to see the cast and crew screening of a multi-million dollar Disney movie. Somehow, it didn’t add up… but I never did like math, so I went with it. I arrived in Burbank (where the Walt Disney Studios is located) and checked into my hotel and quickly got changed into a look that I came to call “casual but Muppet obsessed,” wearing my friend Jamie Carroll’s “Muppetational Mosaic” t-shirt underneath a blazer. I had to show everyone at the screening that I was a Muppet fan… and what better way to do that than with the greatest Muppet t-shirt on the market today?

While waiting outside the Disney Theater before the screening, something amazing happened… Peter Linz, performer of Walter, walked right past me. I hesitated for a moment, but virtually all of my previous experience with Muppeteers told me not to, so I walked over to him, said hello, and introduced myself. And Peter absolutely could not have been nicer to me. He was so excited that I made it out for the screening and was very hopeful that I’d love the movie. I told him that I already loved Walter and he said, “Don’t say that! You’ll jinx it!” (But I didn’t.) He also made it a point to tell me that, for the past two months, he read The Muppet Mindset daily for his updates on The Muppets news. Worried that I might not see him again, I asked him to sign a miniature poster I had brought with me (more on that later), and Peter graciously obliged, signing as himself and Walter, whose message to me was: “Hi Ryan! Here’s hoping we get Season 4 and 5 [of The Muppet Show] soon! Your friend, Walter.” I don’t know if that makes me the first person to have Walter’s autograph… but I think I’m probably pretty near the first.

After Peter went to take his place in line to get in (behind me… which didn’t make any sense), the line started moving and as we were walking in I saw Bill Barretta. Obviously, I jumped out of line just to go say hi and something like, “I don’t know if you remember me, but…” But, not only did he remember me, he hugged me when I came up. Honestly? I don’t know anyone nicer than Bill and his wife Cristina(maybe Peter Linz)… they truly made this trip for me. Bill told me he was excited for me to see the movie and mentioned something about Dancing With the Stars on Saturday. I grinned and nodded and laughed along with him and didn’t pay much mind to what he said about Dancing With the Stars… but come the next day, I definitely would. 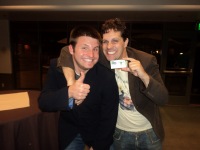 As I moved into the theater I grabbed a bucket of popcorn (adorned with Kermit, Piggy, Beaker, and Animal) and a water bottle and took my seat to wait for the movie to start. I wasn’t sitting long, however, when Rocco Fonzarelli (I don’t think that’s his real last name… sneaky Rocco!), who worked on the sound team for The Muppets and did a great interview with The Muppet Mindset a few months ago, came over to give me a big hug and talked to me a little bit. We couldn’t talk long, however, because the lights dimmed and people were asked to take their seats for the film. I looked around me and realized that the Barrettas were sitting a row behind me and Peter Linz was sitting two rows behind them. To say I was in good company would be a massive understatement.

Speaking of good company, who should walk down the aisle to the front of the theater to introduce the film? None other than director of The Muppets himself, James Bobin! Mister Bobin gave a brief intro and thanked everyone there for all of their work and reminded us (or, in my case, told us for the first time) that there would be food and drinks and socializing directly after the movie for everyone in attendance. At this point, I think it was physically impossible for me to stop smiling–which probably explains why I didn’t cry during my first viewing. You’d be surprised how hard it is to produce tears when you’re happier than you’ve ever been.

And then… well, then I saw the movie for the very first time–and you all know how that went (and if you don’t, you can read all about it in my review from the day after). I’ve seen The Muppets five times now, and no matter how many times I see it, nothing will ever replace this viewing as my favorite. It was such an unreal experience… seeing the movie for the first time alongside most of the crew and two of my personal heroes–who were seeing it for the first time in its entirety–rocked my world to the core. It can not get better than that (or, at least not until that Saturday). 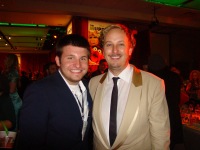 After the screening we all adjourned to a large banquet/dining room a few steps away from the theater. I hung out with Rocco a lot here and got to talk to Peter Linz again. We took a picture together and I told him I was right about Walter and probably annoyed him with all my gushing about how much I loved Walter and how much the character meant to me. Then I noticed James Bobin just mingling with everyone. I nervously approached him and introduced myself as “Ryan Dosier, I run a Muppet fansite,” to which he responded, “Oh, brilliant! Which one?” When I told him I ran The Muppet Mindset he was very pleased. He told me that the site is “brilliant” (he’s British, he says that a lot) and I think he mentioned that he loved Weekly Muppet Wednesdays. I’m honestly not sure… I completely spaced after I found out he reads the Mindset. Then I doled out compliment after compliment to him about the film and told him he could expect a good review the next day. I asked him to sign my poster, which he was kind enough to take the time to do (“Ryan – Keep up the good work! Cheers, James Bobin”) and bid adieu to an incredibly talented, kind, and, dare I say, brilliant person.

After that I caught up with the Barrettas again, and Bill signed my poster (“Best fishes, okay! Pepe  Bill Barretta”) while we were talking. I also got to finally see Cristina, who, again could not have been nicer and happier to see me. She mentioned something about Dancing With the Stars too, and this time I payed attention. She told me all the performers were going to film a big musical number for the show on Saturday after the World Premiere and asked if I wanted to go with her. I think I nearly exploded… but I contained myself long enough to say YES ABSOLUTELY. She gave me her phone number, told me to text her the next day, and said she’d be in touch.

And with that, I left to go back to my hotel after the most spectacular day of my life (at that point). I slept soundly and giddily that night and the next day I wrote up my review of the movie, went to The Tonight Show taping to see Eric Stonestreet (of Modern Family), had dinner with my good buddy Rocco (who told me all sorts of awesome Muppet stories from his time on the film), and hung out with Rocco and Jill Breitzman, who works for Disney and The Muppets Studio, who told me that everyone at The Muppets Studio loved my review of the movie… including James Bobin and the producers. It’s magic, that’s all there is to it. Pure magic.

Be sure to read Part 2 of Ryan’s adventures in Hollywood, which includes the World Premiere and green carpet of The Muppets, and much, much more!

Plus, check out Part 3 where Ryan talks about the after party, meeting Jason Segel, backstage and the green room at Dancing With the Stars, and meeting not one, not two, but three Muppets!!