Michael Wermuth, Jr. – It’s almost Christmas, and in keeping with the Christmas season, I thought I’d make my list of my 12 favorite Muppet Christmas moments. Now let’s get things started!

12. “The Christmas Song” with Big Bird and The Swedish Chef from A Muppet Family Christmas
In this scene, The Swedish Chef has gotten Big Bird to enter the kitchen, with the intention of cooking him as the main course, but before he can do so, Big Bird gives the Chef a present: chocolate covered birdseed. He gives this to the Chef because he’s away from his family in Sweden during the holidays. This led to a beautiful, if incomprehensible, duet of “The Christmas Song.” Of course, with a change of heart, the Chef has to change plans for Christmas dinner, though it turns out he cooks Big Bird’s absolute favorite: shredded wheat and cranberry sauce! This is a very sweet scene, with plenty of humor as well.

11. “The Christmas Wish” (album version) from John Denver and the Muppets: A Christmas Together
This is a great song sung by Kermit. I know that Kermit sang the song with John Denver in the special, but I enjoy the album version with just Kermit (plus background vocals by the other Muppets) a lot better. The soulful sounds of Kermit’s voice is sweet and powerful and says everything about Christmas that you could ever hope to hear. Kermit sounds great here and the lyrics are just as great.

10. “Everyone Matters” from It’s a Very Merry Muppet Christmas Movie

A great moment in the “world where Kermit was never born” when Kermit decides he wants to go back to his reality, only he can’t find Daniel the Guardian Angel. He finds Gonzo singing about having a bad Christmas, until Kermit joins in, and the two sing about how everyone matters. The full-cast version at the end of the special is good as well, but I prefer Kermit and Gonzo’s duet of this beautiful and heart-warming song. 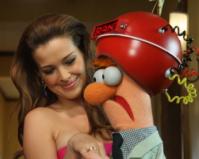 9. The Wish Granter 3000 from A Muppets Christmas: Letters to Santa
At one point in Letters to Santa, Dr. Bunsen Honeydew informs the gang that he has come up with a way they can contact Santa Claus: his invention, The Wish Granter 3000, a helmet which can magically grant the wishes of whoever wears it. Beaker tests it out, wishing for a hot supermodel girlfriend (Petra Nimcova) who talks like Beaker. For some reason Bunsen wants Beaker to wish her away, but after initially refusing, Beaker not only wishes her away, but also himself (and the Wish Granter).

8. “Pass It On” from A Muppet Family Christmas
One of the many highlights of A Muppet Family Christmas is when Kermit and Robin meet the Fraggles after Robin finds a Fraggle hole in the cellar. They travel into Fraggle Rock to meet the Fraggles, who learn about Christmas and reveal that they celebrate a similar holiday, which involves giving presents. They reveal that they have constantly given the same Fraggle Pebble as a present 37 times, leading to this bouncy and fun song, “Pass It On” (which originated in the Fraggle Rock episode “The Perfect Blue Rollie”).

6. “Jingle Bell Rock” from A Muppet Family Christmas
When Kermit and Robin start singing a sweet, quiet rendition of “Jingle Bells,” Dr. Teeth and the Electric Mayhem jump in unannounced to perform a rockin’ version of “Jingle Bell Rock.” With vocals by Dr. Teeth, Floyd, and Janice, great instrumental solos from Zoot and Lips, and jamming from Animal, this is one of the band’s best performances in any show or special.

5. The Muppets Defer Their Pay from It’s a Very Merry Muppet Christmas Movie
At one point in It’s a Very Merry Muppet Christmas Movie, Kermit learns that it’s possible for the Muppets to come up with the money they owe in time with only one performance if everyone agrees not to get paid. At first, everyone is against this (Sam Eagle worries about how he’ll afford his Propecia, while Janice wonders how one can celebrate Christmas without any money), but Fozzie gives them all a speech about how Kermit has done so much for them, convincing everyone to agree to give up their paychecks to save the theater. It’s so great to see all of the Muppets, old and new, in the audience of the Muppet theater.

4. “Thankful Heart” from The Muppet Christmas Carol
This song was well-written, by Paul Williams, and well-sung, by Scrooge after he reforms himself joined by a crowd of Muppets and human extras. This sequence has great moments, sweet moments, funny moments, and even some “what were they thinking?” moments. It also has a cameo by Fozzie and Sam as elderly versions of the characters they play in the movie, Fozziwig and Headmaster respectively.

3. “Gift of the Magi” storyline with Bert and Ernie from Christmas Eve on Sesame Street
A classic subplot from Christmas Eve on Sesame Street, Bert wants to get Ernie a soap dish for Rubber Duckie and Ernie wants to get Bert a cigar box for his paperclip collection. Since they both have no money, they both trade in their prized possessions so that they can purchase presents at Hooper’s Store. But shortly after they open their presents, Mr. Hooper arrives and gives them their possessions back, informing them that he got the best present: He got to see that everyone got exactly what they wanted for Christmas. And then Bert and Ernie sing a great rendition of “Have Yourself a Merry Little Christmas.”

2. My Best Christmas Yet from A Muppets Christmas: Letters to Santa
The finale of Letters to Santa, sees the various Muppets not going on their separate vacations so they can spend the holidays with their neighbor Claire. Almost every great Muppet production has a great closing song, with almost everyone from the special, including callbacks to earlier scenes (such as the girlfriend Beaker wishes for with the Wish-Granter), and verses from a few characters who had been silent elsewhere in the special (Robin, Rowlf).

1. Christmas Medley from A Muppet Family Christmas
At the end of A Muppet Family Christmas, the Muppets all gather for a carol sing, with the Muppets singing an incredible array of Christmas songs, even “Together at Christmas,” a tune written for The Christmas Toy. This medley closes the special and features solos or duets from nearly every prominent character from both The Muppet Show and Sesame Street. The medley lasts a whopping nine minutes and is a classic example of Muppety greatness.