Greetings and good fright to all. Perhaps you stumbled into this blog expecting another amusing entry in the ongoing Weekly Muppet Wednesday series. Well, you’ll still get those… But for this month only, they’ve undergone a hideous transformation… It’s now the Weekly Muppet Monster Wednesdays! (cue thundering sound effect and evil laughter) So if you would, please come with me and we’ll delve into the profile of our first furry and fiendish candidate. 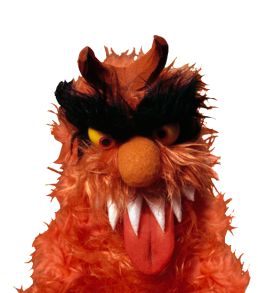 Most recent appearance…
The City Sings a Song! (book appearance) (2005)

Best known role…
Toothy, unintelligible monster with a brutish outside but a childlike desire to be included inside

Frazzle started out as most early background utility monsters on the street, a pumpkin Anything Muppet Monster who grew fur over night. Sprouting horns and some jagged fangs, Frazzle gained notoriety with various appearances here and there in sketches on Sesame Street starting in Season 4. Although Frazzle looks fierce and communicates exclusively in a growling language, his true nature is really childlike, with a desperate need to be included with the other monsters.

The first time he was captured on camera was actually an accidental cameo on the beloved game show Beat The Time! In this episode, fellow furry fellow, Cookie Monster, competed to win a cookie by bringing three things, that’s three things, three things that rhyme with “rain” back to the studio. He brought in a chain, and when Guy Smiley wondered what was attached to at the end, out came Frazzle to terrorize the studio audience.

After this, Frazzle’s star shone brightly with two musical numbers. The first, his own self-titled song, “Frazzle,” demonstrated his true acting ability by showing how he feels in different scenarios. Unfortunately, due to the fact he also speaks in gibberish, he needed the translating skills of his back-up monsters known as the Frazzletones to communicate his current emotive state.

The other number was the classic “Fuzzy and Blue (and Orange)” where Frazzle invaded a performance of Grover, Herry, and Cookie Monster.  Now most people would think he was rudely crashing a rousing Vaudevilleian song, but no, Frazzle merely wanted to be included in the fun the rest of the group was having, which is something most children go through. Yes, Grover tries to point out the difference in fur colors as it was meant to be a blue-only feature, but Frazzle quickly grouses his insistance on joining the tune, and so on the show must go as they say.

Though Frazzle has not been seen in a Street Scene on the show since Season 25 (1996) when Elmo dealt with a delightful bout of coulrophobia (fear of clowns), Frazzle remains a quite popular monster, as evidenced by his multitude of background on-air and book appearances in the nearly thirty years he has been around. The puppet used for Frazzle was finally rebuilt as an unique character in 2001 when it was prudent that he gain a proper identity, both within the monster and Muppet community.

And really… doesn’t that just say it all?